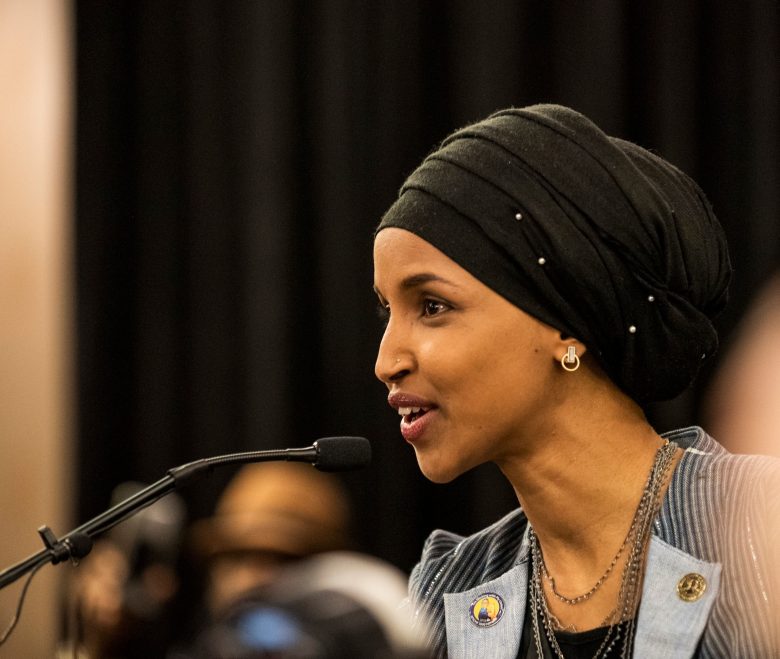 On July 11, Haaretz published a story – Democrats Now Contend With Wave of Progressives Who Criticize Israel and Threaten to Split the Party – and if stories like this are anything to go by, this is already beginning to happen. This piece is particularly interesting because it registers a decline in support for Israel among America’s Liberal Jewish population.

Tuesday marked the start of “freshman orientation” in Washington, D.C., where new members of Congress arrived to meet their colleagues and learn how the House and Senate actually work.

Rep.-elect Ilhan Omar, a Democrat from Minneapolis and one of the first Muslim women elected to Congress, quickly met up with some of her fellow trail-blazing colleagues like Rashida Tlaib and Alexandria Ocasio-Cortez. 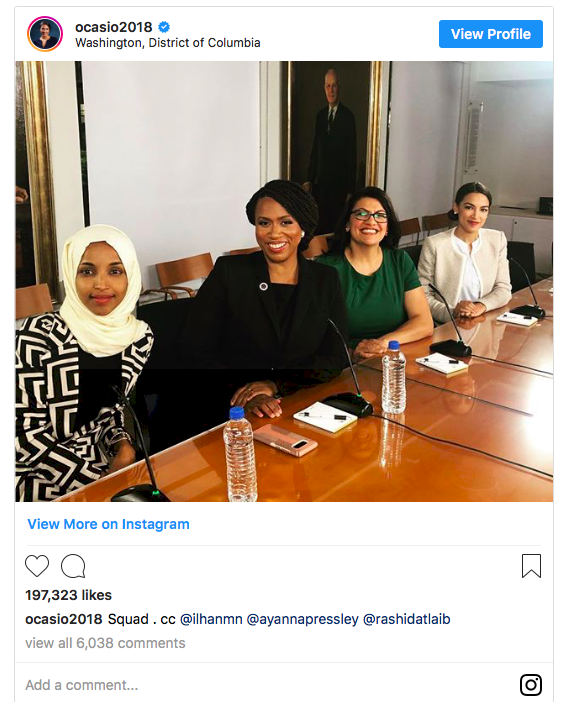 But back at home, many of her Jewish constituents were grappling with remarks her office made on Sunday to a website called MuslimGirl, claiming that Omar supported the boycott, divestment and sanctions movement against Israel.

This seemed like a bait-and-switch to many Jewish Minnesotans: When she was asked at an August primary debate held in a synagogue to specify “exactly where you stand” on BDS, Omar said that BDS was “not helpful in getting that two-state solution” — never explaining that she in fact supported the policy.

“She’s either misrepresenting or misunderstanding. And I hope to be able to have a dialogue with her that clarifies which of those is the nature of her stance,” said Rabbi Avi Olitzky of Beth El Synagogue, which hosted the debate.

However, he added, “Just as I have with all of our previous elected officials, I hope to be able to continue a dialogue once Congresswoman-elect Omar is in office. However, this starts her tenure off on the wrong foot.”

Omar’s office did not respond to an interview request.

It’s unclear why Omar and her team decided to come forward about BDS stance now, after the election but before she is sworn in and can vote on the issue. Tlaib and Ocasio-Cortez, who were both criticized for their statements on Israel during their campaigns, do not appear to have said anything on the subject since their general election victories last week.

Omar, a former Somali refugee who became a community activist and then a member of the state House, appears to be the first member (or future member) of Congress to publicly support the BDS movement.

She cruised to general election victory in November in a district, Minnesota’s 5th, that hasn’t voted for a Republican since since 1962. The district encompasses Minneapolis and some of its suburbs, including St. Louis Park, which has a large Jewish population. The seat opened up when 12-year incumbent Rep. Keith Ellison — who had faced criticism from some Jewish groups for his pro-Palestinian votes and past ties with Nation of Islam leader Louis Farrakhan, but had a good working relationship with local Jewish institutions — announced he was running for state Attorney General, which he was also elected to last week.

Omar, currently in her first term in the state House, was seen as one of the front-runners in the district primary of the Democratic-Farmer-Labor Party (Minnesota’s version of the Democratic Party). But some in the Jewish community were concerned about her past comments about Israel. During a 2012 war between Israel and Hamas in Gaza, Omar tweeted: “Israel has hypnotized the world, may Allah awaken the people and help them see the evil doings of Israel.” Many saw this as repeating an anti-Semitic tropes about Jews using magic to control world events.

When a Twitter user, citing her 2012 tweet, called her a “Jew hater” in May 2018, during her primary campaign, she replied: “Drawing attention to the apartheid Israeli regime is far from hating Jews.”

Omar also voted in 2017 against a bill that would bar the state government from contracting with companies that engage in BDS; it passed with large bipartisan majorities and was signed into law by Democratic Gov. Mark Dayton, but was opposed by the ACLU and other organizations on free speech grounds.

During the primary debate, held before a capacity crowd at Beth El about a week before the election, Omar never mentioned that she was not only a defender of the right to boycott but a supporter of boycotts herself. “I believe right now with the BDS movement, it’s not helpful in getting that two-state solution,” she said in response to being asked “exactly where you stand on” BDS. “I think the particular purpose for [BDS] is to make sure that there is pressure, and I think that pressure really is counteractive. Because in order for us to have a process of getting to a two-state solution, people have to be willing to come to the table and have a conversation about how that is going to be possible and I think that stops the dialogue.”

But in the article published Sunday, titled “Ilhan Omar: Why Advocating for Palestine is Not Anti-Semitic,” MuslimGirl reported that Omar’s campaign told them: “Ilhan believes in and supports the BDS movement, and has fought to make sure people’s right to support it isn’t criminalized. She does however, have reservations on the effectiveness of the movement in accomplishing a lasting solution.”

Omar was called out on this discrepancy in a text exchange with Lonny Goldsmith, the editor of the local Jewish news organization TC Jewfolk. Goldsmith published the exchange on his site.

“My position has always been the same,” Omar texted Goldsmith. “I believe and supports the BDS movement, and have fought to make sure people right to support it isn’t criminalized, re: my vote against the Anti-BDS bill. I do however, have reservations on effectiveness of the movement in accomplishing a lasting solution. Which is what I believe I said at the forum.”

Omar denied that not explicitly saying she supported BDS at the debate was an act of political expediency, saying that she ran an “unapologetic” race.

The moderator “didn’t ask for a yes or no answer,” Omar wrote.

“She asked for your stance on it,” Goldsmith replied. “She also asked you specify ‘exactly where you stand on that.’ That was an opportunity to say you supported it.”

The text thread ended there.

“Anecdotally, a lot of my peers who claim to be supporters of Israel are the same people who voted for Ilhan,” said Margarita Lyadova, a recent graduate of the University of Minnesota, which is mostly based in the 5th district.

According to exit polling, “the top priorities of Jewish voters are domestic issues,” explained Halie Soifer, the executive director of the Jewish Democratic Council of America, which pointedly refused to endorse Omar. She also noted that 79% of Jewish voters supported Democrats.

Many Jewish Minnesotans reached by the Forward said they were not surprised by the news, but still disappointed in Omar.

“I think she clearly danced around the question” at the debate, said Aaron Baumgarten, a business analyst originally from St. Louis Park who voted absentee. “I would bet that being at a synagogue, at an event hosted by Jewish groups, was the reason for not being open about her stance.”

“I think she should have” been explicit, said Beth Gendler, the executive director of the National Council of Jewish Women-Minnesota, which co-sponsored the Beth El event. “I think we all look for honesty in our candidates.”

She added that NCJW has worked with Omar in her capacity as a state legislator on progressive policy priorities, and Gendler said they hope to continue to do so.

“We’re troubled by her support of BDS, and we want to maintain our working relationship with her as a member of Congress,” she said. “We need each other.”

The Jewish Community Relations Council of Minnesota and the Dakotas sounded a similar theme.

“The BDS movement seeks to deny the Jewish people our right to self-determination and is indeed counteractive to a goal that both the JCRC and Rep. Omar support: a two-state solution that recognizes, in Rep. Omar’s words: ‘Israel’s place in the Middle East and the Jewish people’s rightful place in the region.’ The JCRC looks forward to working and building dialogue with Representative-elect Omar on this mutual goal,” executive director Steve Hunegs said in a statement.

Of course, not everybody in the community was displeased.

“I was thrilled to hear that Ilhan Omar supports the BDS movement and that she is committed to making sure that people’s constitutional right to boycott is protected,” Shay Berkowitz, a member of Jewish Voice for Peace and a state party delegate, told the Forward via Facebook. She added that Omar will be “a much-needed bold and courageous voice in Congress.”

National Jewish political groups also wanted to respond. Representatives of the JDCA and the Republican Jewish Coalition (where, full disclosure, I interned for a college semester) both said they were “not surprised” by the Omar news.

“We made a statement denouncing her position in August,” Soifer said. “We were very clear about where she stood.”

But Soifer also argued that Omar, Tlaib and Ocasio-Cortez were “outside the mainstream” of the party. “By the end of this [election cycle], we’ll have picked up almost 40 seats, we’ll have 230 Democratic House members. 99.9% of them don’t share those views.”

RJC national spokesman Neil Straus said that was a “Pollyanna-ish view,” citing many more members of Congress who he said harbored anti-Semitic sentiments.

Israeli-Palestinian issues are not likely to play a large role in Omar’s life in the House, especially since staunchly pro-Israel Democrats will hold the party’s top positions and chair the House committees that would control the progress of most Israel-related legislation.

While Lyadova said she was “disappointed” in Omar and concerned that the news would give support to the BDS movement, which she thinks is harmful to Jewish college students, she tried to look at the bigger picture.

“She was elected to work for the state of Minnesota, and her stance on Israel in no way makes better or worse her capacity to do good work for Minnesota,” Lyadova said. “She can still do great work and not like Israel.”