Images from the little Carpathian town of Mukachevo shocked many Ukrainians–columns of military equipment heading to the west of the country, a statement of the Interior Ministry that operations were being conducted under the leadership of the anti-terrorist center, blasted police cars. So far, only the main actors in the conflict are known to the press and the public. 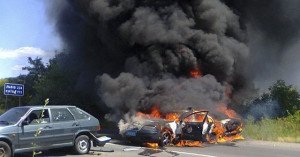 It all started on June 11 during a meeting of Ukrainian Parliament Deputy Mikhail Lano with representatives of the Right Sector, which resulted in an exchange of gunfire. We know of three dead and 11 wounded from both sides. And no one has raised any doubts that the conflict arose due to attempts to redistribute smuggling profits.

Ukraine is a major producer of cigarettes. Sometimes the international tobacco lobby even uses the Ukrainian government to protest anti-smoking laws in different countries. Cigarettes in Ukraine are several times cheaper than in Europe. Smuggling trucks, driven from Ukraine to Italy, bring the organizers of the “deal” hundreds of thousands of euros. Mukachevo, like much of Transcarpathia, “lives from the border”. Many local residents are employed by customs, are directly involved in smuggling, or are otherwise connected with such activities. This agricultural region in which there is practically no industry lives off smuggling, tourism and money sent back by migrant workers employed in the EU and the Russian Federation. Here you will not see the desperate poverty and atmosphere of depression that can be observed in other regions of Ukraine.

According to unofficial data (there are no official statistics), many inhabitants of the region have passports for Hungary, Slovakia and other countries. Towns and villages in Transcarpathia always have a cozy, well-groomed appearance, their beauty complemented by friendly local residents. But there is another side to the almost patriarchal idyll — the corruption that permeates the entire society, and pursues a person from the moment of birth to old age. For residents of Kiev, who also consider themselves victims of corruption, it is difficult to believe how much is rotten in the social institutions in the western region of the country. There, you need to pay for literally everything–health care, education, business. To get work as a nurse, railroad conductor, teacher or sanitation worker, you need to pay a lot of money. Almost all inhabitants of the region are firmly attached to a system of “informal” relationships, well-established for decades.

This corruption is multiplied by a total lack of social mobility. If you stay in Transcarpathia, you will never reach a position higher than the predetermined station of your family, your kind. Transcarpathia does not have the kind nepotism we think of with the sons of Yanukovych and Poroshenko, who, through their remarkable talents, became MPs. Here there is a real clan system.

Locals don’t always like the name of Transcarpathia, considering it humiliating. Many believe that Ukraine lies beyond the Carpathian Mountains, and they live at home. Despite the fact that Transcarpathia is in the west of the country, they do not share an ethnic Ukrainian nationalism. This is due in part to the multinational composition of the population, in part to the particular identity of the region. In the video recorded during the movement of Ukrainian military equipment you can hear the attitude of Transcarpathians to the government army.

The Right Sector — a radical nationalist group led by Dmitry Yarosh — has turned into an extensive franchise. Bandits who previously camouflaged themselves as hunting or sport clubs now use the “brand” of “patriotic battalions” — in particular, the Right Sector. It’s no secret that the Right Sector in Transcarpathia is funded by the “master” of the region, Viktor Baloga. The 52-year-old multimillionaire has long firmly controlled the local authorities. However, Baloga apparently disagreed with his former patron Lano, now deputy in the Verkhovna Rada.

On June 11 in the city of Mukachevo, the sports club Antares was the site of a “shootout” — so one of the nationalists described the meeting with Deputy Lano. On further facts ,the parties disagree. But, in fact, we know that the nationalists shot the security guard in the face and then threw several smoke bombs as they escaped from the scene. Shortly thereafter, they tried to destroy a traffic police post. They opened fire using rocket-propelled grenades and machine guns, and two police cars were destroyed. After the clash, the militants went into the forest where the disappeared, according to preliminary reports. The press service of the Interior Ministry reported that during their flight, the nationalists took an 11-year-old child hostage. Videos of him quickly spread on the Internet.

The story of the militant nationalists, who claimed they were fighting ruthless smugglers, broke down not only through the banal distrust of the residents,but also by copping facts from the biography of local leader Roman Stojko. A few years ago, he became the hero of a story about a clever way to smuggle cigarettes. Our “hero” built a hang glider with which he flew over Hungary and, without ever landing, dropped his cargo of cigarettes to his accomplices.

The people fighting Right Sector on behalf of deputy Lano were also exposed. The public was extremely shocked that people wearing Adidas tracksuits carrying Saiga semi-automatic carbines participated in the operation against the Right Sector. Interior Ministry spokesman Artyom Shevchenko said that they were police officers responding to an alarm who did not have time to put on uniforms. However, one of them was later identified as Lano’s assistant deputy, Nikolai Yovbaka. His somewhat jarring surname has already caused plenty of jokes–and, apparently, will become a household name, just as Vadim Titushko once became a symbol of mercenaries in tracksuits. The slaughterhouse in Mukachevo also revealed the ugly truth about the vehicles used by the volunteer battalions to the Ukrainian patriotic public. It turned out that one of the jeeps was stolen in the Czech Republic and listed as wanted. 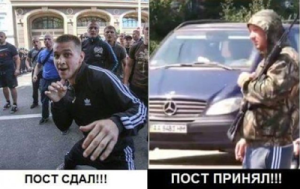 Of course, in this particular case, the conflict ended in nothing–two nationalists surrendered to the authorities, with the guarantee that they would be brought to court in Kiev, where they are likely to be released soon. The rest fled in an unknown direction, since the authorities did not dare to arrest the killers. The nationalists put armed pickets at the entrances of several cities in western Ukraine. The country once again saw that armed ultras are allowed to operate with impunity and even defiantly violate the laws, engaging in murder, racketeering, robbery, which have long been common in the East of Ukraine among the terrorist “volunteer battalions” there.

However, the political implications of the slaughter in Mukachevo are enormous. It seems that Interior Minister Avakov, who has already done a lot to subjugate the nationalist battalions and to establish control over all the right-wing radicals, will try to squeeze as much as possible out of the situation. The regime is not against the fascist organizations, but simply wants to fully subordinate them to the security services. This does not mean that the degree of radical nationalism will decline, only that the government will try to establish a monopoly on nationalism – because the ultra-right has become so strong that the authorities can’t fully control them.