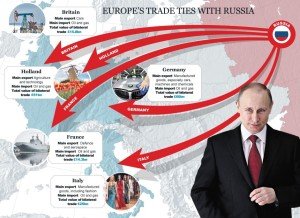 Philippe Pegorier describes himself as a “bridge” between Russia and the West, and in speaking with him it doesn’t take long to see why. Exuberant and charming, Pegorier, 53, seems made to bring people together. It takes a conscious effort to remember there is a powerful organization behind him, whose interests and viewpoint he is promoting. In fact, there are two. Pegorier heads French power company and train maker Alstom’s operations in Russia, Ukraine and Belarus. And since May, he has chaired the Association of European Businesses, or AEB, a Moscow-based lobby group with over 600 member companies.

Pegorier took the helm of the AEB this year at the height of the worst clash between Russia and the West since the Cold War, joining as the association fought a fierce rearguard action to — as the AEB sees it — prevent two decades of economic ties from being thrown under the wheels of political discord. Despite the AEB’s efforts, all sides have ramped up sanctions against one another as the crisis in Ukraine escalates, leaving both Russia and the European Union teetering on the brink of recession.

The EU does a huge amount of business with Russia: Trade turnover in 2012 was 336 billion euros ($420 billion), far more than Russia’s trade with the United States or other developed economies that have clamored for harsher sanctions against Moscow.

Russia runs deep in Pegorier’s personal and professional history. He began studying Russian at the age of 10 and first came to the country at 14, witnessing a world he describes as “completely different” from everything he had known before. He returned to Russia in 1985 as trade attaché for a French technology company, where he was charged with managing cooperation with the Soviet Union. From there, Pegorier launched into more than two decades of government service, both in France and overseas posts, including the economic mission in Tehran. He also served at the French Embassy in Ukraine, first as a trade and economy adviser in the early 1990s and then as head of the economic service 11 years later. He returned to the private sector in 2011, when he joined Alstom in his current post.

Q: What are your first memories of Russia?

A: When I arrived in 1983 to work in the Soviet Union, everything was different — the cars, the way to buy products, everything. It was a completely different world. It was also sometimes much easier for business. For example, foreign trade was a monopoly, meaning that when you knew just two people — the person responsible for France at the relevant ministry and the foreign trade company or organization that covered your sector of the economy — you were contacted for all tenders over the entire Soviet Union from Vladivostok to Kaliningrad and from Frunze [now Bishkek, the capital of Kyrgyzstan] to Arkhangelsk. You had also to know the bosses of these two people, and the minister and so on, but not a lot of people for the size of the Soviet Union.

And never forget, the Soviet Union had, at least until the period of General Secretary Mikhail Gorbachev, one of the lowest levels of financial risk in the world, and contracts were paid very well. This began to be lost in the Gorbachev era, but has come back with President Vladimir Putin. Now Russia is still, despite the sanctions, a good place to be.

Q: Why did you stay in Russia?

A: In France there are not so many people who know Russia. So in Alstom I am like a bridge between the two cultures and countries. The Association of European Businesses is also a bridge — between the EU and Russia. Even if people do not always agree with each other, it is a place to exchange views and discuss.

Q: What is the role of the Association of European Businesses, especially in this current crisis?

A: The association’s role is to promote the activities of our 650 members with European and Russian authorities. We are here to advocate economic growth and create value. In this situation, that means being clearly against economic sanctions against Russia and also promoting de-escalation everywhere. Because escalation is bad for business — in Russia of course, but first and foremost in Ukraine. We will, of course, comply with any economic sanctions, but we look a priori to avoid them.

We are also working toward the establishment of new long-term ties between the EU and Russia and the negotiation of a free-trade agreement between Europe and Eurasian Union [a bloc that unites Russia, Belarus and Kazakhstan].

Q: How do you lobby the Russian government? Who are you in contact with?

We are in contact with everybody. With the economic ministries, with the Foreign Ministry — Foreign Minister Sergei Lavrov regularly accepts our invitations to speak to the association — and with the State Duma and the Federation Council. It is always better to lobby before laws are written than after they are adopted. So we try to influence laws during their creation, in the interest of our members or European business. Or to say: Attention, this law may have a bad influence on our relations.

Russian lawmakers are very open to discussion. I will not say we always agree, but at least we discuss. Just as we also now — especially now — do not always agree with the European Commission or different European governments.

Q: What do sanctions against Russia mean for the EU?

A: Economic sanctions will have a very bad influence on European economies, raising unemployment and causing bankruptcies. There is a choice: Do they [European governments] want to prioritize the quality of life of their own citizens, or of people abroad, Ukrainians? I think with elections inside the EU — in France, Denmark, Italy and so on — the message of voters is: We want the EU to look to us, not to look abroad.

Q: Do you think the crisis has shaken European companies’ faith in the Russian economy?

A: We had a good survey by market research company GfK, which showed in its most recent report in May that European companies are very confident in the long term. Thanks to the growth of the middle class, modernization of infrastructure and so on, it is clear that Russia is developing. Maybe not as fast as Western businesspeople, Western politicians and Western journalists would like, but you should not forget that Russians have never in their history lived so free and in such good conditions as now.

Short-term, of course, there could be difficulties, but at companies that have been here for a long time, such as Alstom and Siemens, we know there have already been many crises, and we survived. So there is a crisis. There will be other crises in the future. But we stay here because we know that between the crises we will raise and rise with the country, as the market rises.

A: Russia is a very big country, and China, like Europe, is its neighbor. It is normal that Russia has ties with both. Even in the Soviet era there were ties with China. I think there is space for everybody. At the same time, the EU accounts for 75 percent of foreign investment in Russia. The Chinese are still not at this level and will need a long time to get there. The EU’s presence in Russia is historical, centuries-old and important.

Q: How has Russia’s economic slowdown affected Alstom’s operations and your sector in general?

A: Alstom is between two phases of investment. The market is flat. Investment around the winter 2014 Olympic Games in Sochi is over, and a new phase of investment to modernize infrastructure for the 2018 Football World Championship is set to start. We are confident that Russia will have to modernize the 10 [host] cities. They will need new public transportation and metro systems, and new electricity networks.

Q: How would you describe your relations with state companies?

A: Our clients are mainly state companies. We produce locomotives for Russian Railways and metro and tram cars for cities and municipalities. We also work with energy companies Inter RAO, Rosatom and RusHydro. We have very good relations with state firms, even partnering with them. We have a joint venture in nuclear with Rosatom, for example. Nuclear is very touchy, and we are dealing perfectly with them.

Q: How do you handle staffing with expats and Russian workers?

A: The most difficult thing is to find good high-level Russian employees who speak English. With expats, attracting them is a question of what we pay. But the problem with expats is that usually — at least in our company — they do not speak Russian, so you do not use these two resources for the same thing. When, for example, we are at the design concept stage of a new type of locomotive, it is better to have expats. These transfer their know-how to Russians — after all, we need Russian people for production and so on. Expats are not here for life, they come for a couple of years.

Q: How do you manage staff in Russia?

A: The traditional way to rule a Russian company is pyramidal: It all goes to the general director, who signs everything. That is the Russian way. Western companies, especially big companies like Alstom, are organized in a matrix structure. So what I need to do in my position is to mix both, to straddle the pyramid and the matrix. It is a bit complicated. I would not say it is impossible, because we are managing it, but it is a challenge.

Q: What advice would you give to a foreign company that wants to come to Russia?

A: First you need to establish confidence with your clients. Russians only do business with their friends. You need to know them, you need to spend time with them, and only then can you do business. That means you have to spend time in Russia. You cannot simply send an e-mail or fax for a quotation. First, they usually do not read the e-mail. When you send an e-mail you have to call them and ask, “Have you seen my e-mail? And can you open it?” You need to have their mobile number in your mobile, and they have to have yours in their mobile. Never call with a secret number — your name must be on their mobile when you call. Then they answer. Indispensable. Without that, business is impossible.

Even chief executives themselves must spend time in Russia. Alstom chairman and CEO Patrick Kron comes regularly — three, four times a year. Henri Poupart-Lafarge, the head of Alstom transport, comes every month. There is no other country he visits so often.

It is also important to be here when times are difficult. French CEOs and French businesses showed this at the last St. Petersburg International Economic Forum. Chief executives came despite phone calls from the U.S. State Department. They came and said, “We are with the Russians at this difficult time.” They all came, by the way, all the CEOs who used to come to the St. Petersburg forum. But you know the French. By themselves, they might hesitate, but when they hear a phone call from Washington — no hesitation, they go. Our American friends do not know us very well. It is the French mentality.

Q: How does this strong human element affect careers in Russia?

Q: What will you miss when you leave Russia?

A:  Contact with people. When you are partners, you are also friends. You do not find this in other, Western countries. You know your partner’s family, his kids, his wife, his friends. He invites you to his birthday parties, which is usually something very important in Russia. All of this creates confidence. So this type of strong human relationship I will certainly miss when I leave Russia. But I hope I will not leave soon.