Morrison digging a grave for Australia 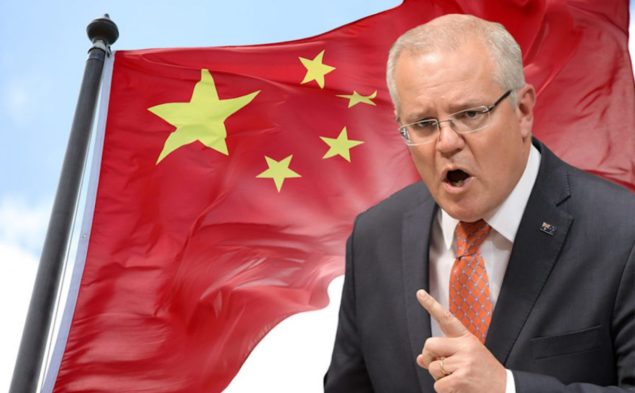 By yielding to US pressure to antagonize China, Australia risks being buried alive, says Bhim Bhurtel.

But I do remember one scene from that Hollywood film vividly, and I still find it frightening whenever that memory pops up in my mind.

In the scene, a soldier of the war’s victorious side forced a counterpart of the defeated side to dig a grave. After the grave was dug by the enemy soldier, the commander ordered his troops to bury him alive, in the pit he had dug himself.

That horrifying scene is an analogy of what I see today in Asia-Pacific geo-strategy, with one critical difference: In the film, the man buried alive was the enemy. But in real life at this moment, the grave is being dug at the behest of a friend and ally.

In this modern scene, the gravedigger is Australian Prime Minister Scott Morrison, and it is his own country that is to be buried alive.

It is US President Donald Trump who is getting Morrison to dig the grave. Whether or not Morrison knows that Australia is to be buried in that hole, such an outcome is inevitable.

The Sino-Australia relationship has been at a historic low since April. Consequently, China has been applying economic sanctions against Australia. The economic embargo is the result of Australia’s series of provocations against China, which Beijing is certain were undertaken by Canberra at the behest of the US.

Morrison has been announcing more and more stringent measures against China since 2018. In August of that year, Australia was the first OECD (Organization for Economic Cooperation and Development) country to announce a ban on Huawei and ZTE providing equipment for a 5G (fifth generation) telecom network.

This year, Morrison called in April for an independent inquiry into the origins and spread of Covid-19. And in May, Australian Foreign Minister Marise Payne joined a meeting with counterparts from Canada, the UK and the US in which they issued a statement of “deep concern” over Beijing’s proposal of new national-security law in Hong Kong.

In July, Australia announced that in its view, Beijing’s claims in the South China Sea have no legal basis.

Australia is planning to rejoin the Malabar naval exercises with India, the US and Japan. It is also planning to join a ministerial meeting of with those three countries in New Delhi to transform the Quad into an Asian NATO as part of a strategy to “contain” China.

Thus Australia has taken one initiative after another against China, none of which will have any direct benefit. It is not doing this at its own will but because it has not been able to resist US pressure.

Whenever Canberra has tried to resist such pressure, Washington has forced it to bow down. For instance, Secretary of State Mike Pompeo warned that the US could complete a “disconnect” from Australia over the Victoria state government’s Belt and Road deal with China.

Why has China chosen to retaliate against Australia? There are many reasons.

First, it considers Australia a proxy for the US. As well, Beijing wants to set an example for other middle-power countries seeking to join the US-led alliance against China.

The message to such countries is that it is their choice whether or not to participate in an alliance against China, but if they choose to be part of a coalition of the “like-minded” based on democracy, the rule of law, and human rights, they should be willing to pay the price.

Second, Australia is the most economically dependent country on China among the developed economies. Exports contribute 24% to Australia’s national output, and about 39% of those exports go to China.

In 2018-19, Australian universities earned A$37.6 billion (US$27 billion) in revenue from foreign students, and almost 32% came from Chinese students.

Chinese tourists spent A$12.4 billion in Australia in 2019, one-third of the total foreign tourists’ spending of A$37.4 $ billion.

Similarly, China is a leading importer of Australian farm products, iron ore, coal, and natural gas. The economics editor of The Sydney Morning Herald, Ross Gittins, quotes John Edwards, a former Reserve Bank of Australia board member, as saying, “Without trade with China, Australia’s living standards would be lower, its economy smaller, and its capacity to pay for military defense reduced.”

The impact of the Chinese economic sanctions on Australia is likely to be seen immediately, and their implication transmitted effectively to other countries eyeing an anti-China alliance with the US.

Third, China wants to stop Australia from being part of the US plan to convert the Quad into an Asian version of the North Atlantic Treaty Organization. It also wants Australia not to participate in the Malabar drill hosted by India. If Australia participates, China will impose severe economic sanctions against it. Through this, China also builds pressure on India.

China isn’t interested in firing a gun; instead, it fires economic artillery that can inflict severe damage.

Fourth, even if China’s relations with Australia reach a nadir, China will not be as affected as Australia. Beijing does not consider Canberra a significant regional player in global or Asia-Pacific geopolitics.

Australia is not a permanent member of the United Nations Security Council. It is not a rule-maker in global governance bodies such as the World Bank, the International Monetary Fund, the World Trade Organization, or other specialized bodies. So Australia is a soft target for the Chinese.

Fifth, China does not share a border with Australia allowing the latter to exert direct military pressure like India. Its maritime borders are also not connected with Australia.

Whatever the logical conclusion of the trade and technology war between China and the US, Australia will get nothing at the end of the day. On the contrary, Australia is highly likely to lose the Chinese market for its exports, Chinese students for its education sector, and Chinese tourists for its hospitality industry.

Let us look now at some hypothetical scenarios. First, suppose China and the US enter full-scale war. Suppose China loses the battle, and its economy collapses. In that case, one of the direct losers will be Australia, because it will lose its income from China.

Second, suppose a war breaks out, and China defeats the US. In that scenario, Beijing will make or adjust international trade rules and global governance in its own interest. Again, Australia would be a loser because it has not done anything to motivate China to reward it.

Third, if an agreement is reached between China and the US in the form of an “October surprise,” Australia will be badly affected.

If China and the US reach a trade agreement, following the Phase 1 deal, China will import beef, barley, dairy products, wine, wool, and other agricultural products from the US instead of Australia. Similarly, the US is a net exporter of coal, natural gas and iron ore; China can import these commodities from the US rather than Australia.

The US and China reached an agreement on January 15 under which China vowed to purchase an additional $200 billion worth of US goods and services over 2017 levels in four sectors – manufactured goods, services, agricultural products, and energy – in the next two years. To achieve that figure, China could replace its Australian imports with those from the US. American manufacturing, agriculture, and energy products are perfect substitutes for Australian exports to China.

Beijing could allow US universities to open branches in China and create an environment for more Chinese students to study in the US rather than Australia. A large number of Chinese tourists could be diverted from Australia to the US. Such measures would certainly help the US balance its trade deficit with China.

All in all, it is an even bleaker picture than what I saw in that movie I mentioned in the opening paragraphs.

Bhim Bhurtel is visiting faculty for a master’s in international relations and diplomacy, Tribhuvan University in Kathmandu, and faculty for a master’s program of Development Economics, Nepal Open University. He was the executive director of the Nepal South Asia Center (2009-14), a Kathmandu-based South Asian development think-tank. Bhurtel can be reached at [email protected]