The New York Times is at it again with another slanted report on the April 4 chemical weapons incident in Syria, applying ridicule rather than reason to prevent a real evaluation of this war-or-peace moment.

In blaming Syrian President Bashar al-Assad for the April 4 chemical incident in Khan Sheikhoun, The New York Times and other Western news outlets have made a big deal out of discrepancies in the timing and other details provided by the Syrian and Russian governments. 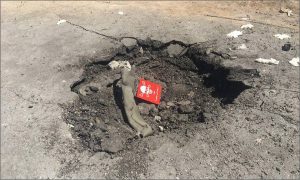 Site of alleged chemical attack in the Syrian town of Khan Sheikhoun on April 4, 2017

The Times and the others also have chided anyone who notes that Assad had no logical reason to undertake a sarin attack since his forces were making solid gains and he had just learned that the Trump administration was dropping the longstanding U.S. goal of “regime change” in Syria.

To those of us outside the mainstream media bubble, there seemed to be little or no military advantage to be gained. Instead, Assad would be risking more international intervention, which has ripped his country apart for the past six years. But the Times and other major outlets dismissed our logic by arguing that Assad was simply announcing his impunity in some particularly brutal Arab-sort-of-way.

However, neither the value that the Times and others placed on the Russian-Syrian timing discrepancies nor the strange explanation of Assad’s motive made any sense. After all, if Assad were making some bizarre public declaration of his impunity, why would he then deny that his forces were responsible? Wouldn’t he simply say, “yes, I did it and I don’t care what anyone thinks”? Isn’t that what impunity means: that you do whatever you want knowing that no one can hold you accountable? Instead, Assad has consistently denied ordering the attack.

The gotcha observation about the time element of the bombings fails the logic test, too. Why would Syria and Russia say Syrian warplanes carried out a conventional attack on Khan Sheikhoun around noon if the actual attack occurred around 6 a.m., as it apparently did? There was nothing to be gained for them by having the timing off by six hours, since the point that Syria and Russia were making was that there were indeed airstrikes but that they were conventional bombs that may have unintentionally struck an Al Qaeda depot holding chemical weapons and thus released them. The timing element was immaterial to that point.

What this apparent timing error suggests is confusion, not “spin”, as the Times insists in a tendentious April 27 video by Malachy Browne, Natalie Reneau and Mark Scheffler, entitled ‘How Syria and Russia Spun a Chemical Strike’.

The Syrians and Russians appeared perplexed by what had happened. Their officials understood that a conventional airstrike had been carried out and stated what they believed the time was. The time discrepancy either meant the Syrian air-wing commander had dispatched warplanes earlier than expected or that some other entity carried out the 6 a.m. strike. But the Syrians and the Russians would seem to have no reason to lie about this detail.

Another false assumption pervading the Western accounts on this and other chemical incidents in Syria is that only the Syrian government and its Russian allies have control of the skies. That is clearly not true. Various military forces, including those of the U.S. and its allies, as well as Israel and – to some degree – the rebels have air capabilities in Syria.

According to Syrian accounts, the rebels have captured some government helicopters and apparently used one in what United Nations investigators were told by multiple eyewitnesses was a staged chemical-weapons attack in 2014 with the goal of sticking the blame on the Syrian regime.

Further, the U.S. and its allies have been conducting airstrikes across much of Syria in campaigns against Islamic State and Al Qaeda-linked terror groups, which have been supported by Saudi Arabia, Turkey, Qatar and other Sunni-led sheikdoms. Turkey has been active, too, with strikes against Kurdish forces. And Israel has hit repeatedly at Syrian targets to promote what it regards as its interests, including destruction of Iranian weapons believed headed to the Lebanese militant group, Hezbollah.

Some – if not all – of these entities had a far stronger motive to create a chemical-weapons incident in Syria on April 4 than the Syrian government did. At the end of March, the Trump administration announced that it was no longer a U.S. priority to overthrow the Assad government, an announcement that upset several of the countries involved in the Syrian conflict, including Turkey, Saudi Arabia, the Gulf States and Israel.

All of them – having committed resources and prestige to achieve “regime change” in Syria – had motive to overturn President Trump’s pronouncement. (Israel has had “regime change” in Syria at the top of its to-do list since at least the mid-1990s.) How better to keep that hope alive than to stage another chemical-weapons attack and blame it on Assad?(Another sarin attack in August 2013 also now appears to have been a staged incident by Al Qaeda that killed hundreds while almost tricking President Obama into ordering a massive U.S. military strike on government forces.)

Shortly after the incident at Khan Sheikhoun, I was told by an intelligence source that U.S. satellite imagery had picked up what looked like a drone in the vicinity at around the time that the poison gas was released. Despite some technical difficulties in tracking its route, the source said the analysts believed that it may have come from a Saudi-Israeli special operations base in Jordan, used to assist the rebels.

There are also other combinations of factors that should have been carefully evaluated before President Trump jumped to his Assad-did-it conclusion and fired off 59 Tomahawk missiles at a Syrian airbase on April 6, but they weren’t given serious thought in the rush to blame Assad.

For instance, Al Qaeda’s clever propagandists could have again staged a chemical attack on the ground by creating a crater in the road and inserting what was purported to be a chemical-weapons canister. The Times and others have noted that the crater was not visible in earlier satellite images but that observation doesn’t mean the crater had to be created by an aerial bomb; a ground explosion or simple digging could have done the trick – with the crushed canister inserted later.

The canister-in-the-crater story struck MIT’s technology and national security expert Theodore Postol as particularly odd because on-scene photos showed people climbing into the supposedly sarin-saturated crater wearing minimal protection and not keeling over dead. Postol also said the canister appeared to have been crushed rather than exploded.

There is also the possibility that some third party with access to sarin or other powerful chemical weapons could have delivered the poison gas by air – possibly from that drone – with the rebels either coordinating with that delivery before the fact or reacting to the opportunity after the fact.

The hard truth is that intelligence services from a number of countries could fit the bill in terms of producing sarin or some similar substance that could mimic what Syria once had in its arsenal, although those chemical weapons were supposedly destroyed in 2014 as part of an agreement hammered out by Russia and the United States.

And there are plenty of ruthless intelligence operatives on all sides who would have found the deaths of 80 or so people acceptable collateral damage to advance a geopolitical priority. The timing, so close to the Trump administration’s major announcement that Assad no longer had to go, would have represented a logical motive for such a ruse.

The other problem in assessing what has or hasn’t happened in Syria over the past six years is that all sides, but particularly those seeking “regime change,” have deployed sophisticated propaganda operations to the combat zone.

Anti-regime activists – financed and supplied by the West and the Gulf States – understand the emotional value of showing dying children. These propagandists have regular and uncritical access to major Western media outlets, from the hipsters at VICE to the neocons and liberal-interventionists at The New York Times.

In other words, what is still desperately needed in this latest chapter of the Syrian tragedy is some honest broker who could conduct a serious investigation that isn’t contaminated by all the previous propaganda-infused narratives. But the chances of finding that person or group are slim to none.

Consortium News is approaching the deadline for its spring 2017 fund drive. The drive is $2,000 short of its $30,000 goal. To contribute to the fund drive, click here.