By Ivan Katchanovski, published on his Facebook page, July 25, 2015 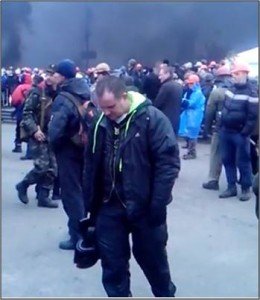 One of several pro-Maidan snipers (background left in photo) shown in video on YouTube from Feb. 20, 2014

This previously unreported but publicly available video (https://www.youtube.com/watch?v=KCrl2lAvmlw) shows [Volodymyr] Parasiuk and some armed members of his special company walking past the Maidan stage from the Trade Union building direction during the Maidan massacre at 9:10am on February 20, 2014 (3:25-3:28 mark in the video). One of them openly carries an AK assault rifle, or its hunting version.

My study contains evidence that Maidan snipers shot at the police from the Trade Union building shortly before the police units fled at 8:50am and that this building remained one of the locations of the Maidan “snipers” or their coordinators during the massacre of the protesters.

From 9:07-9:10am, at least four protesters (Shymko, Solchanyk, Saienko, and Kotsuba) were killed within less than 150 meters of each other. The evidence suggests that at least first three of them were shot from the Hotel Ukraina. At 9:10am, there was a public announcement from the Maidan stage about snipers in the Hotel Ukraina. Armed Berkut police officers were also firing live ammunition in the close distance at this very time.

This group of the Maidan “snipers” was not seen in videos and photos from 9:10am till 10:18am, that is, during the time when most of the 49 protesters were killed. This looks like “dog that did not bark.” At 10:18-10:19am, they were filmed running into the Hotel Ukraina as a part of a larger armed group, which was then shooting from the hotel as protesters were killed from the same hotel, as even the official investigation now concluded.

Such seemingly irrational actions become rational if the Parasiuk special Maidan company “snipers” and the initial Hotel Ukraina “snipers” were from the same side. Many Maidan activists and leaders and journalists near and on the stage saw this group of the Maidan “snipers” walking past them, but none of them reported this.

The YouTube video has received only a few dozen views.