Monopsony capitalism and worker power in the global garment industry 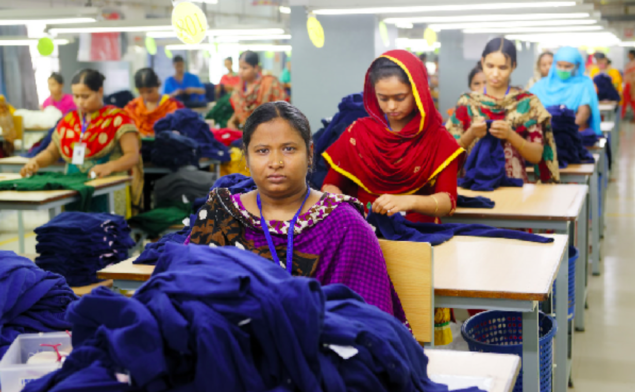 Bangladesh is an industrial one-trick pony. Eighty-four percent of its export revenue are readymade garments which workers, mostly women, churn out chiefly for western markets.

However, since the COVID-19 pandemic, global demand has plummeted, brands and retailers have cut and run, and factories have shutdown, laying off a million garment workers — a quarter of the country’s garment workforce.

On May 27, the Bangladesh Garment Manufacturers and Exporters Association (BGMEA), the country’s largest trade group for garment factory owners, wrote to British billionaire Philip Day’s Edinburgh Woollen Mill (EWM), which owns brands such as Jaegar and Peacocks, demanding that the group pay for clothes shipped prior to March 25 and threatening to blacklist the company.

BGMEA president Rubana Huq suggested that targeting EWM was only the beginning. The move was unprecedented in the history of the sector.

The pandemic and its economic effects have accelerated many of the changing dynamics that I outline in Monopsony Capitalism: Power and Production in the Twilight of the Sweatshop Age. Indeed, the COVID-19 crisis lays bare the consequences of years of overreach by global brands as well as the growth, consolidation and organisation of suppliers in the apparel industry.

The durability of sweatshop conditions in the garment and footwear sectors has rested on disintegrated value chains, in which large oligopolistic buyers (brands and retailers) maintained a high Degree of Monopsony Power (DMP) over many small suppliers. Monopsony, simply, is when you have many suppliers and few buyers.

This dynamic left low-margin manufacturers in a state of perpetual instability, unable to muster the capital necessary to escape the orbit of brand power and pursue their own development as a result of the unrelenting existential threat of losing a purchasing contract.

The persistence of a low value, high DMP structure made it impossible for workers to make demands at the point of production.

For over a hundred years, retail brands maximised profits by creating bidding wars between factory owners. Factory owners, in order to stay competitive and survive, would increase downward pressure on workers.

Workers at the factory-floor end of this chain reaction were left with poverty wages, deteriorating workplace standards, and increasing incidences of factory fire and collapse. Namely, the 2013 collapse of the Rana Plaza in Dhaka where 1,129 workers perished and many more were injured. It marked the deadliest structural failure in modern human history and symbolises the enduring legacy of the sweatshop.

However, as we entered the period of globalization, every new liberalized border increased the number of supplier firms able to enter the sector, which intensified the Degree of Monopsony Power.

The result was that small and medium size suppliers were unable to compete and were acquired by larger suppliers, which lowered the Degree of Monopsony Power (DMP).

I demonstrate that two sometimes overlapping forms of spatial inflexibility for capital, regulatoryand market, increase the disruptive potential for workers. In other words, the more flexible the supply chain, the easier it is to replace workers who cause disruptions in the supply chain. Conversely, the more inflexible, the greater the disruptive potential.

In the early years of industrial capitalism in the mid-1800s, the legal grey area in which labor activism operated gave way to more formal collaboration with employers and the state. By the 1930s until the 1970s, a high degree of regulatory spatial inflexibility, set limits on the degree of monopsony power (or the ratio of suppliers to buyers), giving labor a stronger leverage with which to move the economy, a newfound power manifest through the trade union movement and collective bargaining agreements.

Before the crisis of the 1960s and 1970s, Western garment workers, particularly in the US and the UK, had been shielded by protectionism. This capped the monopsonistic power of buyers and confined the trade unions’ need to ‘chase the work’ within the US and parts of Canada.

The crisis, however, inaugurated a new era of trade liberalization – that is, a lower degree of regulatory spatial inflexibility, as capital spilled over into the Third World, significantly isolating these same trade unions.

The result, however, was a production apparatus that was spread more widely, and despite the MFA ensuring a modicum of regulatory spatial inflexibility, it nonetheless remained too low to prevent capital from easily enacting spatial fixes should workers in any one location flex their collective muscle.

The 2005 end of the MFA was also the official end of the industry’s regime of regulatory spatial inflexibility. Global buyers then steered production into a handful of cheap but labor-rich countries.

As manufacturers began consolidating in response to the intense competition for contracts in those labor-rich countries, buyer DMP gradually contracted, giving rise to a market form of spatial inflexibility. In other words, large retailer brand oligopolies have come to simultaneously benefit from growing profits brought on by economies of scale and integration while becoming gradually dependent on increasingly oligopolistic outsourced manufacturers.

What emerges is an increasingly calcified symbiotic relationship – locking-in global buyers with global suppliers – intensifying the integration of supplier end capital; horizontally, as factories grow larger, from factory to warehousing, logistics to retail.

By this point, suppliers in the most ‘valorazible’ sections of the sector had become mature firms, guarding their market positions with high entry barriers (via technology and so on), and exercising increasing heft within the supply chain.

Before this latest stage set in, labor had been launching campaigns organized around a rights-based framework (codes, audits, and so on), but did not have enough footing to fight a globalized, vertically disintegrated industry.

But now, centralization and market spatial inflexibility have rendered the relevant workforces much more important, substantially increasing their relative structural power. They are no longer so disposable.

Regulatory and market spatial inflexibility each have their own drivers, underlying logics, and developmental contexts. But both set constraints for global buyers, and therefore the degree of monopsony power, value distribution, and critically the disruptive power of workers in the value chain.

The COVID-19 global pandemic and economic crisis will only intensify the underlying monopsony logics outlined above. In addition to the growth and consolidation of particular suppliers, there is increasing organization of suppliers into employers’ associations on a national level.

Led by Bangladesh, the BGMEA and Bangladesh Knitwear Manufacturers and Exporters Association (BKMEA) have become the most outspoken representatives of supplier interests, They have challenged the brands openly as in the case of EWM, and issued more general public statements against the unfair terms of exchange and the unilateral actions of the brands and retailers in the current crisis.

In Cambodia, the Garment Manufacturing Association of Cambodia (GMAC) has taken a similar, if less strident, stance in calling on the brands to honor their contracts.

In Korea, ad hoc groups of suppliers have formed around particular cases, as in the bankruptcy of Forever 21 that left 15 suppliers owed over US$100 million, and in the case of Kohl’s, which owes even more to a group of ten major suppliers. This is pushing the Korean Federation of Textile Industries to abandon its conservative stance and move in the direction of confronting the brands and retailers.

Suppliers like Crystal Group, MAS Holdings and Esquel Group are so powerful that its unnecessary for them to speak up publicly, as their brand customers have attempted to neither cancel orders nor demand discounts. As the herd thins out, there are few alternatives able to produce at the pace, cost, and capacity of these large capital-holding firms.

In Bangladesh and Cambodia, and in the case of Korea-based suppliers, the suppliers’ organization gives them the power to demand that brands honor their contracts, and to threaten a boycott. But it is only because of the growth and consolidation of the individual suppliers that they are able to maintain an organization expressing their common interest in spite of competitive dynamics.

This crisis not only reveals the growth, consolidation and organization of the suppliers — it will also greatly contribute to a new wave of consolidation as weaker suppliers fail and are taken over by larger capital-holding firms.

The shakeout is likely to eliminate much of the excess productive capacity in the industry, further empowering the remaining suppliers in relation to the brands and retailers. Indeed, the underlying logic of competition coupled with the COVID19 crisis bolsters supplier-end consolidation, resulting in more inflexible supply chains due to falling DMP.

These changes open up new possibilities for suppliers and workers. Just as the era of regulatory spatial inflexibility limited the degree of monopsony power, which increased the bargaining power of workers, so too, the era of market spatial inflexibility is already seeing greater demands from supplier firms. Indeed, workers are asserting their disruptive power against their increasingly powerful employers, which could help signal the twilight of the sweatshop age.

Ashok Kumar is Lecturer in International Political Economy at Birkbeck, University of London.

This article summarizes and reflects on Ashok Kumar, ‘Monopoly Capitalism: Power and Production in the Twilight of the Sweatshop Age‘, Cambridge University Press, 2020.