Interview by Dmitry Rodionov with Victor Shapinov, published in Svododnya Pressa, Sept 7, 2015, translated from Russian to English by Greg Butterfield in Red Star Over Donbass. 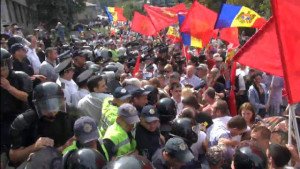 Protest by Red Bloc in Chisinau, Moldova is attacked by police on Sept 6, 2015 (Red Star Over Donbass)

On Sunday, September 6 in Chisinau, the biggest protest in the existence of independent Moldova took place. According to the protesters, it attracted about 100,000 people. The rally was attended not only by residents of the capital, but also visitors from remote areas of the country. And that, apparently, is only the beginning of the campaign, which many have dubbed the “Moldovan Maidan.”

After the action, the protesters crashed in the center of Chisinau, camping out near government headquarters. On Sunday nigh,t there were about 10,000 people in the central square of Chisinau. Organizers of the rally began collecting money to, in their words, “get ready for a long confrontation with the authorities,” while residents began to bring food and water to the demonstrators.

“Grand National Assembly” – so the protesters named their event. Those remaining in the area christened the campground “Township of Dignity and Justice.” …

Prime Minister of Moldova Valery Strelets established a working group to negotiate with the protesters. “We are ready to discuss all the demands. To do this, an ad hoc group of representatives from various ministries has assembled, under my direction,” he told representatives of the contact group. However, leaders of the “YES” Platform noted that the scheduled 17:00 meeting with demonstrators never took place.

“We came to the government, but no one wanted to meet us,” said one of the leaders of the “YES” platform, lawyer Andrei Nastase. The press service of the Moldovan government reported that the prime minister and several members of the government came to the meeting, which, in the presence of journalists, was appointed in the great hall of the building of the Ministry of Agriculture and Food. Finally, after waiting for each other for about 20 minutes in different places, the two sides broke up with nothing.

Recall, the protesters demanded the resignation of the president and the government, the leadership of the National Bank, the General Prosecutor’s Office and other agencies, removal from power of the oligarchs, first of all, Vlad Plahotniuc, holding of early parliamentary elections no later than March 2016, transition to popular election of the president (currently selected by Parliament), depoliticization of law enforcement and prohibition of entry into the U.S. and EU for the current leaders of Moldova, reform and return of the country to the path of European integration. The demonstrators accused leading members of the ruling pro-European coalition of the Liberal Democratic party (PLDM), the Democratic party (DPM) and the Liberal party (PL) party of corruption, of embezzling billions of dollars from three commercial banks, as well as monopolization of the media and suppression of press freedom.

In addition, a group of protesters led by the Red Bloc tried to set up tents in front of the Prosecutor General’s Office. After clashing with the demonstrators, security forces dismantled the tents.

The protesters tried to break through to the building of the Prosecutor General, but police stood in their way. During the clashes, several people were injured. One woman was taken to the hospital in an ambulance. The picketing was carried out by activists supporting the demands of the Red Bloc party. Their supporters gathered in front of the Academy of Sciences, where a rally was held, attended by several hundred people. Then they marched through the city center and tried to enter the building of the Prosecutor General.

“The Prosecutor General’s Office is in the hands of oligarch Plahotniuc and carries out his political orders,” explained one of the leaders of the party, former Communist MP Grigory Petrenko. As a result, Petrenko was detained, along with his associates Pavel Grigorchuk and Mikhail Amerberg. …

According to political commentator Victor Shapinov, who was detained by Moldovan police last fall for taking part in a protest rally and deported to Russia, the current actions are more like the Marsh than the Maidan. [Translator’s note: “the Marsh” refers to the Russian protest movement of 2011-2012, which had both left/antifascist and right/pro-Western wings.]

Victor Shapinov: Different forces are unhappy, including both leftists and pro-Russians. The center of discontent is a regime that caters to the interests of only one of the largest oligarchs — Vlad Plahotniuc. People rebelled against him not only under European flags, but under red ones.

In today’s protest at the General Prosecutor’s Office – an agency fully corrupted by Plahotniuc – my comrade and friend Pavel Grigorchuk was arrested. For Pavel, this was not the first arrest. Last fall, he and I were arrested on suspicion of “preparing mass riots,” when in fact we were only trying to organize farmers suffering from the disastrous policy of European integration, which deprives Moldovan peasants of their markets in the Customs Union countries. We were interrogated in that same prosecutor’s office which yesterday was stormed by several hundred angry people led by Pavel. At that time I was deported, and Pavel spent a few months in jail.

Free Press: What are the chances that the regime will be toppled?

VS: The chances are great. If even the “pro-European” coalition has rebelled, even pro-European-minded citizens, then the situation for the corrupt oligarchic regime is bad. However, there is a danger that the righteous anger could be intercepted by Moldovan Nemtsovs and Khodorkovskys. And that would lead the country into even greater deadlock than it is in now.

FP: What is the “Yes” Platform? What will happen to the country if it comes to power?

VS: The “Yes” Platform is a liberal-nationalist coalition. Basically, its leaders are those who in 2007 overthrew President Voronin [leader of the Communist Party], but for one reason or another do not fit into the new “pro-European” government. But again, unlike Ukraine, in Moldova the protest has a left wing. In the last elections in Moldova, first place was taken by the Socialist Party, which went to the polls under anti-oligarchic slogans and with the intent to improve relations with Russia. Those who voted for the Socialists and other opposition parties are now also in the ranks of the dissenters, but they do not believe that it is necessary to change one group of pro-European politicians for another.

FP: What is the role of the West in this process? How does it feel about a possible regime change?

VS: The people who set the tone for the “Yes” Platform are not alien to the West. Therefore, I believe that the West would not prevent the removal of the Plahotniuc regime, since it has become so corrupt that it discredits its own European partners.

FP: And how should Moscow respond to what is happening?

VS: I would support the left and pro-Russian wing of the opposition. But usually Moscow “wakes up” too late — as we have seen in Ukraine.

FP: Is there a chance for the left and pro-Russian forces to seize the initiative?

VS: There is. But, unfortunately, the Socialist Party, which came in first in last year’s elections, succumbed to pressure and falsifications, bowed to the government of the “pro-European forces,” went into opposition and began a parliamentary mess. If the radical left – like Grigory Petrenko and Pavel Grigorchuk – can lead the discontented masses, create an organization, then there is a chance.

FP: And what about the Communist Party (PCRM)?

VS: The PCRM, in the person of party head Vladimir Voronin, unfortunately, turned out to be in the camp of Plahotniuc. The communists withdrew slogans against “European integration” and actually supported right-wing pro-European parties. Those who disagreed with this were expelled from the party, such as Petrenko, who was a parliamentary deputy of the PCRM and a member of the Central Committee.

Therefore, the results of the PCRM in the last election were modest – from 45 percent, its support has fallen to 17 percent, and its voters have gone to the Socialist Party.

FP: And what would be the results of early elections?

VS: It’s difficult to say. The “Yes” Platform has no party structure, but it could pick up “pro-European” voters from the parties in power. On the left, the Socialists will gain a lot. Another leftist or pro-Russian project might make a breakthrough. Petrenko heads the “Red Bloc” party. The pro-Russian politician Renato Usatii has a good chance — in the last election, his Rodina party was removed from the ballot under false pretenses.

FP: Where do you place the Moldovan crisis within the European situation and the global confrontation between Russia and the West? What role could Moldova play in this confrontation, especially against the backdrop of the crisis in Ukraine?

VS: Moldova has been forced into the role of supplier of labor to the EU. A large part of the country’s GDP is remitances from migrant workers.Goods produced in Moldova can be sold only in Russia and the countries of the Customs Union. Therefore the choice of integration strategy is so important. And, of course, Moldova is suffering from the global crisis of capitalism — the number of jobs in the EU is decreasing, the pressure of migrants from the South, uprooted from their homes by wars, intensifies. All of this plays a big role for Moldovans.

With regard to the contradictions between Russia and the West, Moldova has never been a key element. Perhaps it will become so now due to threats by the Ukrainian regime against the Pridnestrovian Moldavian Republic [the independent republic of Transnistria]. In Moldova they are afraid of war, people fear that NATO will pull their country into conflict with Ukraine or Transnistria. I hope that the healthy forces of the Moldovan society will be able to prevent it.