How we were misled about Syria: The case of Amnesty International

January 25, 2017
By Professor Tim Hayward, published on his website ‘Tim Hayward’, Jan 23, 2017
Most of us living outside Syria know very little of the country or its recent history. What we think we know comes via the media. Information that comes with the endorsement of an organisation like Amnesty International we may tend to assume is reliable. Certainly, I always trusted Amnesty International implicitly, believing I understood and shared its moral commitments. 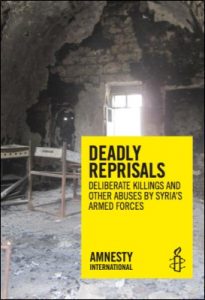 Amnesty International report on Syria in 2012

As a decades-long supporter, I never thought to check the reliability of its reporting. Only on seeing the organisation last year relaying messages from the infamous White Helmets did questions arise for me.[1] Having since discovered a problem about the witness testimonies provided by Doctors Without Borders (MSF), I felt a need to look more closely at Amnesty International’s reporting.[2] Amnesty had been influential in forming public moral judgements about the rights and wrongs of the war in Syria.

What if Amnesty’s reporting on the situation in Syria was based on something other than verified evidence?[3] What if misleading reports were instrumental in fuelling military conflicts that might otherwise have been more contained, or even avoided? …

Previously by Tim Hayward:
How we were misled about Syria: The role of Médicins Sans Frontières (Doctors Without Borders), by Tim Hayward, Dec 30, 2016