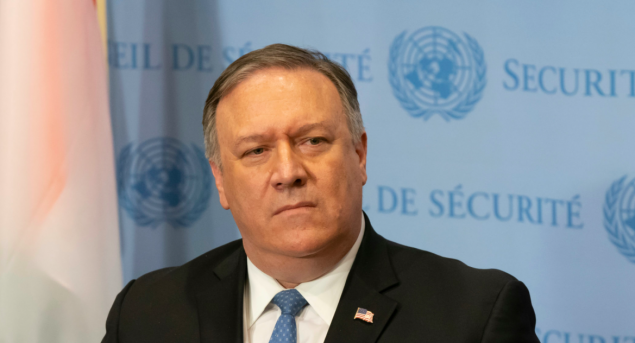 Pompeo’s use of words like “realism” and “restraint” is a smokescreen intended to confuse his audience and make Trump’s foreign policy sound like it squares with the policies most Americans want.

When your political opponents start using your terminology and pretend to embrace your policy recommendations, it shows that they understand that your ideas are powerful and attractive and that it is best to try to coopt them rather than dismiss them outright.  In short, it’s a good sign that you’re on the right track.

It is somewhat encouraging, therefore, to hear super-hawkish Secretary of State Mike Pompeo describe the Trump administration’s foreign policy as one of “realism” and “restraint.” On February 25, for example, Pompeo said the three principles underpinning President Trump’s foreign policy are “realism, restraint, and respect,” adding, “All of these apply to Afghanistan and what we are doing there.”  Leaving the Afghan government out of the peace negotiations isn’t exactly a sign of “respect,” of course, but getting the United States out of the Afghan quagmire is certainly right policy at this point.

This was not the first time Pompeo used these terms. In a speech on U.S. policy toward Latin America in December, Pompeo claimed that “realism” was the core idea shaping U.S. policy there as well.  In his words: “You have to stare at the problem set as it is, not as you wish it were to be.” Pompeo then added that “the second idea is restraint. . . our power is not limitless, and sometimes we must make difficult choices.” And “the third idea is respect. . . for our American principles and how other nations choose to run their affairs inside of their own countries.”

If the secretary genuinely believed in these concepts, and if the broad sweep of U.S. foreign policy reflected them, it would be tempting to applaud politely and offer Pompeo a non-resident fellowship at the Quincy Institute after he leaves office. Unfortunately, Pompeo’s words are mostly empty rhetoric. Viewed objectively, U.S. foreign policy under his and Trump’s leadership bears little resemblance to what a realist and restrained foreign policy would be.

For starters, let’s not forget that the Trump administration has continued to expand an already bloated defense budget, without offering a convincing justification for seemingly endless increases. Advocates of a more realist and restrained foreign policy favor maintaining a strong U.S. military, but we recognize that we have that already. It is hardly “restraint” when Trump, Pompeo, and Secretary of Defense Mark Esper insist that the United States must continue to spend more on national security than the next seven or eight countries combined, while critical domestic needs go unmet.

Similarly, restrainers emphasize the importance of diplomacy, because realism teaches that states can more easily gain their objectives if they have the support of other like-minded states and can keep their adversaries isolated. What have Trump and Pompeo done instead? They have purposely weakened the Department of State, appointed manifestly unqualified loyalists to key foreign policy posts, failed to defend dedicated U.S. diplomats like former Ambassador to Ukraine Marie Yovanovitch, and treated more than a few friendly heads of state not with “respect” but with ill-disguised contempt.

Consider also how the Trump administration has handled America’s growing rivalry with China. Instead of embracing the Trans-Pacific Partnership, a twelve-nation trade deal that would have aligned key Asian economies with the United States and reinforced our strategic partnerships with key allies who could help us contain China, Trump walked away from the deal on his third day in the White House and left our Asian allies to forge a regional pact on their own. Instead of assembling a coalition of advanced economies to confront China over its abusive trade practices, Trump picked trade fights with Japan, South Korea, Canada, Mexico, and the European Union, all at the same time. The result: the United States ended up facing China entirely on its own and with far less leverage over Beijing. This is mindless unilateralism, not realism, and it helps explain why the trade war with China achieved little. Indeed, China may be the long-term winner.

Most important of all, the Trump-Pompeo approach to foreign policy has relied far more on wishful thinking than in “seeing the problem set as it really is.” Trump thought a glitzy “reality-show” summit with North Korean leader Kim Jong Un and his own personal charm would convince Kim to abandon the nuclear arsenal that is his regime’s — and his country’s ultimate guarantee of survival. This unrealistic line of thinking blithely ignores everything we know about North Korea and the deterrent power of nuclear weapons. Look at it this way: if the mighty United States thinks it needs thousands of nuclear weapons to be secure, is it surprising that a far weaker and much more vulnerable government like Kim’s is unwilling to part with its far more modest nuclear arsenal, which it has made extraordinary sacrifices to acquire?

Or take Pompeo’s signature policy of “maximum pressure” against Iran. There is nothing “restrained” about this policy; it is a campaign of brutal economic warfare, punctuated by repeated threats, unrealistic demands, and occasional acts of violence. After abandoning the JCPOA — the nuclear deal in which Iran agreed to constrain its nuclear program in exchange for multilateral sanctions relief — the United States threatened to impose punishing secondary sanctions on the remaining parties to the agreement if they continued to adhere to it and expanded their economic relations with Tehran. The JCPOA had been endorsed by the U.N. Security Council — giving it the full force of international law — placing the Trump administration in the bizarre (and hardly restrained) position of threatening to sanction several close allies if they obeyed a law that the Trump administration had broken.

The purpose of this policy, as MIT’s Barry Posen recently observed, is the anti-restraint goal of regime change in Iran. There no question that “maximum pressure” has inflicted great harm on Iran’s population, but the clerical regime shows no sign of either collapsing or capitulating to U.S. demands. Instead, it has done what any good realist would have predicted: it has struck back by threatening oil shipments in the Gulf, retaliating against U.S. allies like Saudi Arabia, restarting its nuclear program, and inching closer to the capability of acquiring a nuclear weapon more quickly. Pompeo may think Trump’s decision to assassinate a top Iranian general was “restrained” behavior, but that’s not how Iranians view this action and that’s not how the secretary would see it if Iran (or any other country) declared open season on top U.S. officials. In short, it was neither realist nor restrained for Trump and Pompeo to go down a path that has made another war in the Gulf more likely. And as Posen makes clear, the war that Trump and Pompeo are courting is not in anyone’s interest.

To be sure, President Trump sometimes sounds like a restrainer, saying that he wants to get out of the regime-change business, bring some U.S. troops home, and get our wealthy allies to take more responsibility for their own defense. Trump recognizes that most Americans want out of Afghanistan, which is why he cut a deal with the Taliban. But don’t let Trump’s words fool you: there are now more U.S. troops deployed in Europe than when Trump took office, and he sent more troops to the Middle East to reassure Saudi Arabia after the conflict with Iran heated up.  As for treating other nations “with respect,” that approach is no longer in America’s diplomatic playbook.

The bottom line: Pompeo’s use of words like “realism” and “restraint” is a smokescreen, intended to confuse his audience and make Trump’s foreign policy sound like it squares with the policies most Americans want. It may also be intended to discredit true realists and restrainers, by suggesting that our views are no different from the current administration’s.

Whatever Pompeo’s motives may be, those of us affiliated with the Quincy Institute should take some small satisfaction that our core principles are starting to seep into his rhetoric. But we still await the moment when he goes beyond mouthing words he plainly does not believe, and starts pursuing a genuine policy of realism and restraint. If Pompeo wants to learn what such a policy would entail, he knows where to find us.

*****
Stephen M. Walt is the Robert and Renée Belfer Professor of International Affairs at the Harvard Kennedy School of Government, where he served as Academic Dean from 2002 to 2006. He previously taught at Princeton and at the University of Chicago, where he was Master of the Social Sciences Collegiate Division and Deputy Dean of Social Sciences. He received his B.A. in International Relations from Stanford and his M.A. and Ph.D. from the University of California, Berkeley. He is currently a contributing editor at Foreign Policy magazine and co-editor of the Cornell Studies in Security Affairs book series. Professor Walt was elected a Fellow of the American Academy of Arts and Sciences in May 2005 and received the International Studies Association’s Distinguished Senior Scholar award in 2014. His books include The Origins of Alliances, (Cornell University Press, 1987) which received the 1988 Edgar S. Furniss National Security Book Award, Revolution and War (Cornell, 1996) and  Taming American Power: The Global Response to U.S. Primacy (W.W. Norton, 2005) which was a finalist for the Lionel Gelber International Affairs Book Award and the Arthur Ross Book Prize. His book The Israel Lobby and US Foreign Policy  (co-authored with John J. Mearsheimer) was a New York Times best-seller and has been translated into more than twenty foreign languages. His latest book is The Hell of Good Intentions: America’s Foreign Policy Elite and the Decline of US Primacy , published by Farrar, Straus & Giroux in October 2018.
Editors’ Note: While we don’t necessarily share the views we publish on New Cold War, we do attempt to provide readers with a range of views. This is because your right to make your own mind up depends on your being fully informed.
Share
Tweet
Share
Pin