Introduction by New Cold War.org–In this new essay, Dutch investigative writer Max van der Werff publishes findings from a visit on April 17 to 23, 2015 to the village of Torez, Donetsk region, eastern Ukraine. The village is located very close to the site of the crash of Malaysian Airlines Flight 17 on July 17, 2014. Vanderwerff visited Torez specifically to investigate the veracity of photos published last year allegedly taken from Torez showing the vapour trail of a missile fired on the day and at time of the MH17 crash. His conclusion: the published photos were doctored. 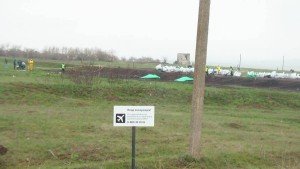 Van der Werff published an earlier report from Torez, consisting of his Facebook postings during the time he was there: MH17: My week at the crash site in Donbass. The article is replete with photos and videos.

One of the reasons I visited the MH17 crash area in April 2015 was my desire to verify the authenticity of the only two existing photos showing a smoke plume claimed to be generated by a Buk missile.

Read the full article, with extensive photos and images, at the weblink above or by clicking here.

Video of ongoing recovery work at the crash site of MH17

Recovery work at the MH17 crash site by Dutch and Malaysian investigators is still ongoing. Here is a four-minute video of that work, by Max van der Werff, filmed on April 21, 2015: