Mehbooba’s Daughter to Amit Shah: ‘Tell Me Under Which Law I’ve Been Detained’

Iltija Mufti, the entrance of her family’s house in Srinagar, and Union home minister Amit Shah. Photos: Twitter and The Wire

‘Apologies for not posting this letter, but as you’re aware postal services in Jammu and Kashmir have been suspended.’

On August 7, The Wire‘s founding editor, Siddharth Varadarajan, attempted to meet her at the residence but was told by the plain-clothed policemen deployed there that this would not be possible and that they had orders “from above” not to allow Iltija Mufti to meet anyone.

On August 15, Iltija manage to send this letter – addressed to Union home minister Amit Shah – out to The Wire through a trusted aide.

It is being reproduced in full below.

I am left with no other option but to write to you since I’ve made several unsuccessful attempts to get a degree of clarity on my detention. Hope and pray that I am not punished/penalised or arrested for raising questions about my fundamental rights.

Kashmir is engulfed in clouds of darkness and I fear for the safety of its people including those who spoke up. We Kashmiris are reeling in despair since the unilateral abrogation of Article 370 on August 5, 2019. My mother, Ms. Mehbooba Mufti, former chief minister of Jammu and Kashmir was detained along with scores of other elected representatives the very same day.

It’s now been over ten long agonising days since this crippling curfew was imposed. The valley is gripped with fear because all forms of communications have been snapped thereby debilitating an entire population. Today while the rest of the country celebrates India’s Independence Day, Kashmiris have been caged like animals and deprived of basic human rights.

Unfortunately, for reasons best known to you, I also have been placed under detention at my residence. We are not even told when visitors are turned away from the gate and I am not allowed to step out either. Odd, since I am not affiliated to any political party and have always been a law abiding citizen.

However, the security personnel have cited my interviews to various media portals and newspapers as the reason for my detention. In fact, I’ve been threatened with dire consequences if I speak up again.

Pertinent to mention that the recurrent theme of these interviews was unconstitutional abrogation of the Article 370 followed by an unprecedented curfew. I also expressed concern for my mother’s safety, who along with hundreds of political detainees have been jailed since August 5, 2019.

With due respect, I fail to understand why I am being punished for speaking on behalf on Kashmiris whose voices have been smothered. Is it a crime to articulate the pain, torment and indignity we’ve been subjected to?

Does it warrant a detention to describe our plight? I’d be most obliged If you could kindly throw light on the laws under which I’ve been detained and for how long? Do I need to seek legal recourse?

It’s suffocating and humiliating to be treated in this manner. I have to grovel for permission to allow my aged grandmother to visit her son. Is she also a potential threat?

For the world’s largest democracy, doesn’t a citizen not have a right to speak up in the face of unimaginable repression? Satyamev jayate i.e. truth only triumphs has defined the spirit of our country and it’s constitution. It’s a tragic irony that I am being treated like a war criminal for stating the inconvenient truth.

Apologies for not posting this letter but as you’re aware postal services in Jammu and Kashmir have been suspended. 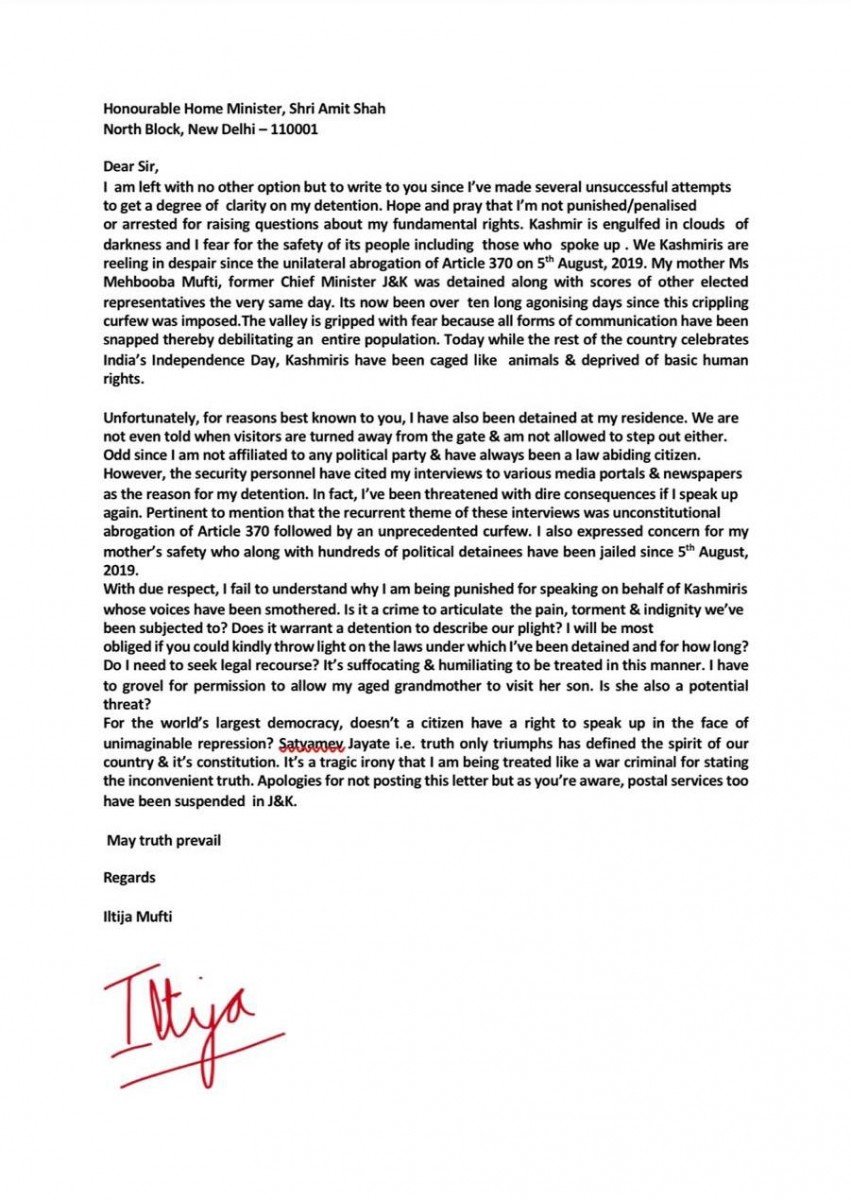