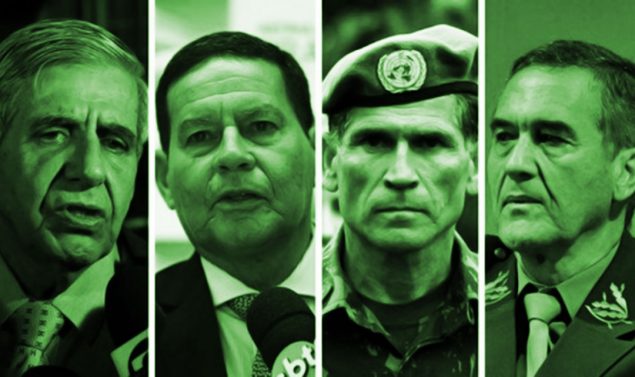 A Junta has taken the power that was left vacant by the cartoon caricatures of Bolsonaro and his sons. Captain Jair may continue living in the Presidential Palace and even play video games in his office in the Capital building. All he has to do is obey his commanding officers, the generals.

It was a little more than 45 days of the most bizarre power experiment in Brazilian history, but it’s over. The Jair Bolsonaro government, as the victorious power arrangement that won at the ballot box in 2018, no longer exists. A new phase two is beginning, of a regime that is ending the period of the people’s Constitution of 1988. A military junta is taking power in a government which they already dominated. There are 4 generals encapsulated in the Presidential Palace: Augusto Heleno, Hamilton Mourão, Carlos Alberto dos Santos Cruz and Eduardo Villas Bôas. In the next few days, the Junta may incorporate General Floriano Peixoto Neto, who is slated to substitute General Secretariat Minister Gustavo Bebianno, Bolsonaro’s campaign coordinator who was recently ousted on money laundering charges.

It is not exactly a coup d’état. The coup took place in 2015-2016. They were already there. Now they occupy all of the key positions in the government. They have taken the power that was left vacant by the cartoon caricatures of Bolsonaro and his sons. Captain Jair may continue living in the Presidential Palace and even play video games in his office in the Capital building. All he has to do is obey his commanding officers, the generals.

The most prominent member of the Military Junta will probably be Villas Bôas. He was the great strategist, the negotiator, the man who took the initiative to betray democracy, ordering the Supreme Court to block Lula’s freedom and impeding the ex-President’s candidacy and with this, guaranteeing the rise of a new regime. The decisive role of Villas Bôas, which should have remained in the shadows, turned public in a pathetic manner – like everything in this process – by the clumsy Jair Bolsonaro. During the January 2 inauguration ceremony for Defense Minister, General Fernando Azevedo e Silva (one more general), the now zombie President publicly mumbled, “General Vilas Boas, what we spoke about privately will remain a secret. You are one of the people responsible for me being here.”

Villas Bôas is like a post-modern Augusto Pinochet, at a time when coups are no longer mobilized with military troops, bombings or blood on the streets – for now. Nominated by Dilma, as Pinochet was nominated by Allende, he will probably now be the boss of the Military Junta. If this doesn’t happen, it will only be due to the fact that he has a serious and fatal illness, amyotrophic lateral sclerosis, which confines him to a wheelchair and a respirator. But his mind is sharp and, despite his health problems, he is a clear member of the Junta.

With Villas Bôas disability, the man who is taking charge is the Chief of the President’s Institutional Security Cabinet, General Augusto Heleno, who played a decisive role during the election campaign and is respected in the Army officer corps. He and Government Secretary General Santos Cruz are friends who form the “Haitian nucleus” inside the Junta, and they will join forces with General Peixoto Neto. They all served in the UN Minustah forces in Haiti. Heleno was the first, and this stands him out from the others. He was Minustah commander in 2004-2005. Santos Cruz took over from 2006-2009, and Floriano Peixoto took over in 2009-2010.

Vice President Hamilton Mourão comes into the Junta almost like a fish out of water. He is not from the same group, is not an intimate friend of any of the others and is always seen as an outsider. But he has something that none of the others posses: he is Vice President of the Republic and, therefore, impossible to fire. But that which would be an enormous difference in the civilian and democratic world may not have so much weight in the relationship of a new power scheme in the capitol. Mourão is un-firable as Vice President. But can anyone from the Military Junta really be fired? What we can see now is that the dormant tensions in the government are deepening.

The Military Junta takes power with broad support from civilian elites. The military are seen as, maybe, the last chance to implement a project for the Nation that aims to alienate all of the natural resources and concentrate wealth at a scale that has never been seen before, under a discourse of “competence”, of ultra-neoliberalism and under the guidance of the “market”.

Bolsonaro is a loose screw. The elites have already concluded that he will get nothing off the ground due to the leaked conversations between him and Bebianno, which irreparably damage both father and sons. The editorials of O Globo and Estado de São Paulo this Tuesday were definitive: it’s over. “It would be naive to believe that Bolsonaro, from one minute to the next, will start acting like a President and take on the responsibilities of the Government,” said the Estado de São Paulo. The Marinho family [owners of Globo], doing justice to their long tradition as coup actors, did not stutter. They publicly asked for a a Military Junta to take control of the government from the chaos of the Bolsonaro clan. They know what they want.

This article originally appeared in Portuguese on 247 and was translated, with permission, by Brian Mier