ADEN, Yemen — While the media was flooded with images of the starving children of Syria, the thousands of children suffering from Saudi Arabia’s U.S.-backed onslaught on Yemen made far fewer headlines. 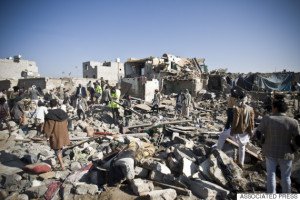 The mainstream media was eager to report on the struggle for survival in Madaya. The mountain town near Syria’s southwestern border was once known as a popular resort destination in the Middle East, but its population is now reportedly being starved under a siege by the Syrian army.

However, the actual situation is far more complex. The U.S.-supported, so-called “moderate” rebels including the Nusra Front, the Syrian branch of al-Qaida, had first laid siege to the cities of Kefraya and Fua, leading to a retaliatory siege on Madaya by the Assad government. Those same rebel groups were also, in turn, responsible for allowing the starvation in Madaya to continue by occupying the city and keeping humanitarian aid out of reach of the populace as a strategic tactic. Additionally, many images used in media reports on Madaya turned out to be fake or misleading.

Meanwhile, far fewer journalists are covering the large-scale starvation and displacement taking place in Yemen, a situation caused by a bombing campaign and blockade led by Saudi Arabia and its allies and backed by U.S. military aid. The Nusra Front, one of the groups responsible for skyrocketing food prices in Madaya, also has the backing of the Saudi government, like many of the rebel forces in the region.

Saudi Arabia is currently engaged in a proxy war with Iran, who Riyadh blames, inaccurately, for the rise to power of the Houthis in Yemen and setbacks to the kingdom’s agenda in Syria, leading to a bombing campaign and embargo on crucial resources that began in April.

UNICEF reported in October that 537,000 Yemeni children were at risk of severe malnutrition nationwide, while Alexi O’Brien, reporting for Al-Jazeera in September, noted that the United Nations warned that 96,000 children were “starving and close to death” in the port city of al-Hodeidah, and an additional 8,000 children faced starvation in Aden in 2016. 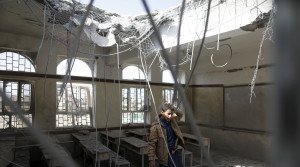 The situation was so dire nationwide that, in June, the U.N. reported “that at least six million people in Yemen are in urgent need of emergency food and life-saving assistance, a new United Nations (UN) investigation has found … 10 out of Yemen’s 22 governorates are facing an ‘emergency level’ food security situation amid the ongoing conflict, including major areas like Aden, Taiz, Saa’da and Al Baida.” In July, Oxfam reported that the number of starving people in Yemen had topped 6 million — nearly half the country’s population of 13 million. Aid workers are struggling to reach the needy, with the World Food Programme reporting that it had served 3.5 million Yemenis by August.

While the suffering of the residents of Madaya is heart-wrenching, some critics have questioned the motives behind the media’s focus on this single town rather than suffering in Yemen or even elsewhere in Syria. Vladimir Safronkov, Russia’s deputy ambassador to the U.N. Security Council, lamented recently that the timing of the reports seemed calculated to undermine the budding peace process in Syria, according to a report from RT. “It looks like that, under the pretext of the deterioration of the situation in besieged cities, attempts are being made to undermine the launch of the inter-Syrian dialogue scheduled for January 25,” he told an emergency meeting of the Security Council on Saturday.

Safronkov said the West practices a “double standard” by raising the alarm about Madaya while ignoring cities besieged by anti-Assad forces:

“Much is being said about Madaya, but not a word about the villages of Nubul and Az-Zahra in the province of Aleppo. And we are talking about the fate of tens of thousands of people.”

On Monday, Ben Norton, politics staff writer for Salon, cited the siege of Yemen, as well as Israel’s decade-long blockade of Gaza, when he questioned why some atrocities are condemned and others are “barely even acknowledged.” He wrote:

“All sieges are of course tragic, because they harm civilians. There should be outrage at the siege on Madaya, but there should be proportionate outrage. All of the other ongoing sieges — and the much larger blockades — that happened to be supported by the West should not conveniently be ignored.

Americans, in particular, should be concerned about the millions upon millions of people being starved in policies backed by their ostensibly democratic government, right at this very moment.”

View:
Two-minute video report on starvation of children in Yemen: It’s not #Madaya. It’s #Yemen … Thank you Saudi regime,  from Stop The War On Yemen.