Big Brother [speaking in English – of course – with an American accent]: “Are you or have you ever been sympathetic to the old communist experience in Eastern Europe?”

Big Brother: “And what about Russia today?”

Yanis Varoufakis: “It’s a sinister and good for nothing place!”

What are Europeans allowed to think today? What are the parameters of current European thought? What magic words aid careerism and media exposure in Europe? And what thoughts in the European landscape are s 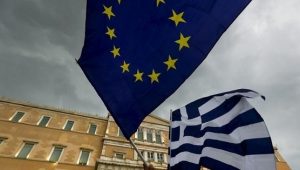 Protesters wave Greek and EU flags in front of the parliament building, in Athens, Greece on June 30, 2015 (Reuters)

The razor sharp mind of the former Greek finance minister and the founder of the Democracy in Europe Movement 2025 (DiEM25), Yanis Varoufakis, is a good indicator of contemporary European thinking. And it’s corrupt shallowness.

Varoufakis declares himself to be a “Europeanist”. Indeed going by his latest book Adults in the Room that’s all he thinks about: Europe. Or to be more precise: the European Union and how to prevent it from falling apart. “Democracy, pluralism and unwavering Europeanism” is his solution to the EU’s problems. That and anti-communism.

When face to face with the EU’s most hawkish decision maker – German finance minister, Wolfgang Schäuble – this is how Varoufakis defines and defends himself and the “radical left” in Greece.

‘Are you comparing me with a well-meaning DDR [East German Communist] minister….?’ I asked. ‘Let me reassure you, Wolfgang…. I am a committed democract, a determined pluralist and an unwavering Europeanist. And so are my Syriza party colleagues. We have …[nothing]… in common with [East German Communism].’ “

Varoufakis believed that his own credibility and that of his “radical left” party in 2015 hinged upon this clear disavowal of communism.

But Varoufakis doesn’t stop there – he’s desperate to be a good European. In his account of his time in the Eurozone crisis, he places other markers around the edges of his thought. Markers which are meant to support his European-ness. And indeed his morality.

And what do these markers look like? They’re almost invisible in the context of 500 dense pages – but they’re strategic pointers that prove Varoufakis is a real “Europeanist”.

On page two, Varoufakis quickly frames his understanding of Europe today: “Vladimir Putin must be rubbing his eyes in disbelief at the way the West has been undermining itself so fabulously.” For this truly European author, it’s a given that “Putin” is enjoying the fall of the West!

A few lines later, our European hero (Varoufakis) says: “there are no ‘goodies’ or ‘baddies’ in this book.” But in the background, of course, there is one bad “regime” he can’t tolerate.

On page 347, he calmly states: “Putin and his regime had an appalling human rights record: did we, whose only real backers were the progressives of Europe, want to be associated with such a state?”

So who, then, do we good Europeans want to associate with? Varoufakis doesn’t explicitly answer this question because the answer is obvious: America. The Butcher of Arabia and The Godfather of Zombie Capitalism – the humanitarian USA – is apparently progressive Europe’s only option.

Varoufakis has no compunction when linking up with the American Deep State. In his struggle to be a good European he openly embraces: Lawrence ‘Larry’ Summers, Jeffrey Sachs, Bernie Saunders and Barack Obama.

In his struggle (his ‘Mein Kampf’) to be a good European, Varoufakis is clear: he didn’t want to antagonize America. And so he persuaded Syriza to jettison it’s genuinely radical 2012 plans. Plans that included, for example, the closure of “all foreign bases in Greece and withdrawal from NATO”.

In a 2013 speech, written by Varoufakis, Syriza directly informed the Brookings Institution that U.S. foreign policy was now not a problem. In other words, the humanitarian crisis in the Middle East caused by the U.S. was not an issue for the good European.

And this brings us to the big blank space in Varoufakis’s understanding of Europe today: imperialism. Joseph McCarthy would’ve been proud. Because while emphasizing his anti-communism and his Russophobia, this good European – Varoufakis – completely misses the horror which Europe and its partner/master (the USA) are responsible for.

NATO’s wars of aggression which are contemporaneous with the Eurozone crisis – and which may explain a large part of that crisis – are absent from Varoufakis’s account of European reality.

But what does Varoufakis know? After all he’s only an economist. Reality is something the academic economist rarely addresses. Another in vogue “left-wing” European economist unconsciously explains the problem well. In his bestselling book Capital the Frenchman Thomas Piketty declares in his introduction:

Varoufakis is a bit older than Piketty but he too was obviously “vaccinated for life against …anticapitalism”.

This vaccination, however, wasn’t just against anti-capitalism, it was also against anti-imperialism. As a result, Piketty, too, doesn’t mention imperialism once in his book on capital.

Such is the emptiness of the “progressive” European mind today that reality passes it and it sees nothing. And Europe is paying the price. Cut off from its fellow Europeans (its working class and the Russians) and cut off from its neighbors (the Asians and Africans), “progressive Europe” is an embarrassing lonely fool.

Only by engaging and adopting the verboten concepts – anti-capitalism and anti-imperialism – does it have a hope. But that demands independence from its American Big Brother. And it also demands probably for the first time in the history of Europe: adulthood.

Aidan O’Brien is a hospital worker in Dublin, Ireland.

Also by Aidan O’Brien on CounterPunch:
Ireland remembers the past and forgets the present, April 8, 2016

…  This Easter, during the commemorations marking the 1916 rebellion against the British Empire, all was on show on the streets of Dublin. The official appearance of independence was on parade. The flags flew, the army marched, the bands played, the choirs sang, the media was in tune and the generals and politicians looked real. It looked like Woody Allen’s “Bananas”. There was even a bit of sunshine. Although the usual rain and cold arrived late in the day.

The present was missing. The British colony in the north, the bank bailouts in the south, the Berlin dictatorship in the east and the American tax dodgers in the west were all hidden from view…