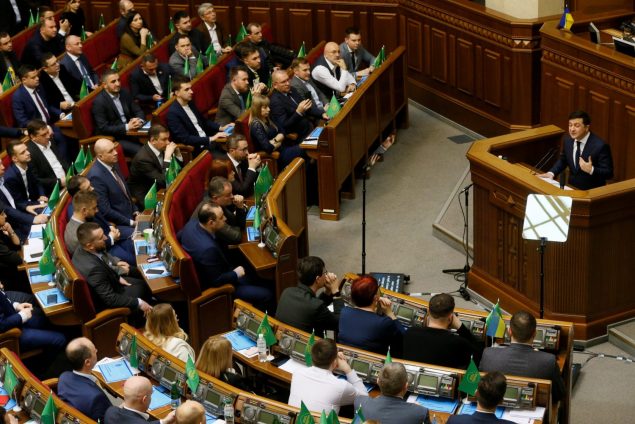 During the month of March, Ukraine has faced serious political crises, accompanied by economic troubles and the COVID-19 outbreak. The Cabinet of Ministers resigned in early March, under a barrage of harsh criticism for its ineptitude in dealing with the country’s economic problems.

President Vladimir Zelensky publicly criticized the former Prime Minister Alexei Honcharuk for his incompetence over the circumstances leading to the unprecedented fall of production in Ukraine, which has accelerated since the end of 2019. Tax and custom services were unable to collect even 25% of the amounts due, which had been planned for the public budget.

To tell the truth, this criticism by the president seems to be hypocritical, as he could not have been totally unaware of whom he had appointed last year. From the very beginning, the former Cabinet of ‘young progressive bloggers’ had revealed its ignorance – they were simply following the instructions of western politicians and bankers. Former PM Honcharuk had even confessed [1] openly in a leaked audio that he ‘was a complete ignoramus about economics’.

Reshuffle leads to shift in power

The appointment of a new Cabinet and PM in early March revealed, however, a certain shift in power in the Ukrainian government. The new PM, Denis Shmygal, formerly worked for the richest Ukrainian billionaire Rinat Akhmetov, number one in the country’s Forbes list. Other appointments and the president’s meetings revealed that Rinat Akhmetov is strengthening his position among Ukraine’s powerful; replacing influential oligarch Igor Kolomoisky and people from western-funded NGOs.

Zelensky had met with him on several occasions, asking for financial aid to deal with the coronavirus threat. In return, the richest Ukrainian received some preferential treatment for his businesses and the opportunity to promote his people to ministerial positions (specifically in the economic sphere).

The first decision of the new Prime-Minister was to raise taxation on electricity imported from Russia. Although Russia sells Ukraine a mere 0.5% of its total consumption, this is an alternative energy source that does not necessitate the increasing of electricity prices for domestic consumers. The biggest electricity producer in Ukraine is Rinat Akhmetov, who virtually has a monopoly of the country’s energy market (controlling some 80% of power production) and, it goes without saying, any monopolist would strive for the elimination of such an alternative source, as it undermines their ability to pursue the uncontrolled increasing of prices.

Western media, in association with the US Democratic party and the Atlantic Council [2], immediately attacked the shift of power and the replacement of ‘their people’. Furthermore, this month they were concerned by the changing of the General Prosecutor. It should not be forgotten that some years ago Joe Biden personally pressured the former Kiev government into firing the General Prosecutor Viktor Shokin, who conducted an investigation into the corruption case involving the gas company Burisma, which had hired Joe Biden’s son.

This time it was the G7 ambassadors who were concerned over the replacement of the Prosecutor General [3]. The point here is that the former Prosecutor General, Ruslan Riaboshapka, was associated with western-funded NGOs and the US Democratic party. Despite public demands for an investigation of the corruption cases, he suspended all cases against corrupt businessmen and politicians from the coterie of the former president Peter Poroshenko.

Currently, concern over the current Prosecutor General mainly stems from the fear that the investigation of corruption cases in Ukraine may negatively impact on some influential western politicians who have been engaged in Ukraine’s schemes.

The change of the Cabinet also revealed the deepening split inside the ruling party ‘Servant of the People,’ which is de-factoa coalition of agents of Ukrainian oligarchs and western-funded NGOs associated with the US Democratic party. However, to calm the concerns of Ukrainian nationalists they appointed as education minister, Lyubomira Mandziy – a quite notorious politician – known for being an organizer of a program for children aimed at the glorification of the SS division ‘Galychyna’ [4].

The only minister who retained his position is the Interior Minister Arsen Avakov. He has headed this ministry for six years and effectively runs the Azov neo-Nazi regiment, the police, the National Guard and numerous far-right gangs. Called the ‘alternative president,’ he accompanies nominal president Zelensky at all important meetings and actually controls him. He plays a very risky game, flirting at the same time with both US Dems and Republicans [5].

Reportedly, he used to inform Republicans about Democrats and vice versa. The Interior minister has seemingly managed to convince western governments that only he is able to control the situation inside the country and prevent its possible collapse.

This shift in Ukrainian politics took place immediately prior to the crisis resulting from the coronavirus pandemic. Kiev met the global threat with an almost completely ruined healthcare system. Last year it was ‘reformed’ by the US installed healthcare minister Uliana Suprun, who cut healthcare spending, banned cheap Russian drugs and medical equipment and disbanded the sanitary-epidemiological service.

By February-March, the former government had also sold most of the country’s medical masks. Thus, when coronavirus reached Ukraine, medics were left without any and only Chinese aid, supplied to Kiev at the end of March, was able to slightly improve the situation. Meanwhile, a criminal case was launched against former Prime-Minister Alexei Honcharuk, who had approved the mass export of medical masks from Ukraine [6]. The Sanitary-epidemiological service was finally re-established in early March, but by then there were no specialists left, as all the former medics had either retired or migrated.

Neoliberal healthcare reforms, promoted by the US-installed ministers, contradict the very principle of targeting pandemics or emergency situations. Neoliberal principles claim that services should be remunerated after they have been provided. But any pandemic or emergency situation requires that extra personnel, extra hospitals and extra equipment should be prepared for in advance. No one begins to organize a fire service in the middle of an inferno.

The measures taken by the Kiev government against the spread of the coronavirus has revealed complete incompetence, as well as chaotic and inconsistent moves. When the Kiev city authorities decided to suspend public transport, it quickly became obvious that even hospital staff were unable to get to work. Instead of organizing transport for the medics, the authorities merely called on private car owners to help out.

However, the Kiev government didn’t miss the opportunity to unleash neo-Nazis under the pretext of coronavirus. Kiev and other big cities are being patrolled by the so-called Municipal Guard, comprising the neo-Nazi paramilitary group C-14, notorious for its frequent assaults on the Roma people [7].

The first cases of coronavirus in Ukraine were registered on March 3. Most of these cases were associated with the return of Ukrainian migrants from Italy and Poland, following the closure of factories and businesses there. Rushing home in their thousands and crossing the border unchecked, their return quickly spread the disease throughout the country.

During February, several dozen Ukrainians had been evacuated from China, causing a mass riot, even though they were isolated. But only a few weeks later, thousands of Ukrainians fleeing from Italy came home and no one bothered to measure their temperature.

Economic crisis and lack of finance

At the end of March, Ukraine’s authorities introduced quarantine and most Ukrainians were left without jobs. Since most of them have no savings and are unable to work, this measure increased the number of gangs and marauders roaming the country. The economic crisis and lack of finance then began to threaten the ‘most important mission of Ukraine’ – to fight against Donbass rebels and pay out debts to the IMF.

The lack of money to treat the coronavirus pandemic caused the new Cabinet to reconsider the public budget, increasing its deficit by almost 300%. But there were cuts, mostly to social programs: aid to farmers, compensation for houses destroyed by Ukraine’s army during the civil conflict, the reimbursement of poor families’ gas bills, and educational programs.

The only funding that was not cut was the military budget and payments to foreign creditors, including the IMF[8]. Whatever happens in the country – be it famine, mass riots, pandemic, earthquakes or economic collapse – these two will remain unchanged. This is the fate of any country ruled by local and foreign bankers.