Manbij – a blueprint for Raqqa in Syria after ISIS?

In the village of Abu Kahaf, at the first Manbij Military Council (MMC) checkpoint after government positions end in the East Aleppo countryside, Syrian Army soldiers who can’t take us any further stay with us until our escort to Manbij arrives. 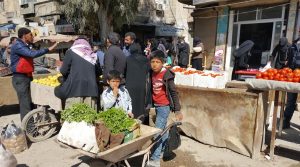 In Manbij, Syria, fourth week of March 2017 (photo by Lizzie Phelan of RT)

It’s an uneasy layover, as local MMC fighters complain to the soldiers about their neighbors in the government-controlled villages next to theirs where checkpoints are manned by an Iraqi militia they say have looted everything from the village. “The people of this village are crying because of this,” one MMC fighter laments, “you’re Syrian right? and you? and you?” The soldiers nod. “Right” he continues, “Syria has been destroyed because of this.”

As the Syrian war enters its 7th year, looting has become increasingly prevalent among many factions on all sides of the conflict, to help make up for the pittance paid to those hundreds of thousands of men sucked toward the country’s frontlines. While their backers turn a blind eye, ordinary people have little choice but to begrudgingly accept it as an inevitability.

However, a few kilometers east of Abu Kahaf, the city of Manbij has not long been liberated from ISIS, is trying to break the mold.

In the months since Kurdish-led Syrian Democratic Forces (SDF) defeated ISIS here, a faction which has become the partners of choice in the U.S. fight against ISIS in Syria, military and civilian institutions have rapidly been established to form a cohesive local government under the name of the Manbij Military and Civilian Councils. 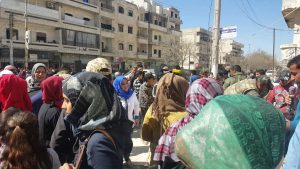 Inauguration of women’s council in Manbij, Syria in fourth week of March, 2017 (photo by Lizzie Phelan of RT)

The leadership promises to soon inaugurate Manbij as the latest Canton of the Democratic Federal System of Northern Syria, a self-governing project unofficially known as Rojava which was initiated by the Kurdish-led PYD party that Turkey brands a terrorist organization because of its links to the Kurdistan Workers Party which it has been at war with for decades on home soil.

It’s a development that brings the leadership of the federal system closer to connecting their territories on the Turkish border which until now have been severed from one another by towns controlled by forces that oppose their project: a mix of ISIS, Turkish-backed rebels, and the Syrian government.

Turkey, therefore, repeatedly threatens to invade Manbij with its own local proxies and overthrow this fledgling local government. Once Turkey moved into nearby Al Bab after months of fighting with ISIS, bringing them to the gates of Manbij, the city became a focal point for both the US and Russia, that are present in and on the outskirts of the city, under the pretense of keeping the peace. And so far, the peace is holding, and the people of Manbij are seizing the opportunity to turn Manbij into a haven in a region that has been ravaged by destruction, death and economic instability that has bred rampant crime.

In the center of Manbij where a few months ago the streets were bare as men, rarely women, only ventured out for essentials under ISIS rule, they now thrive, full of the colors of street sellers hawking recently banned cigarettes, fresh fruit, and vegetables. Many of the stalls and workshops have reopened.

As Zacharia handles the steady stream of customers cramming into his small jeans store, he jokes that times were better under ISIS, because they dealt in dollars. When I asked him about the changes Manbij has been through since the war broke out and how things compare now he says: “In the rest of the country, whether in opposition or regime control, I’ve heard there is looting, the rich can’t show off their wealth or they will be robbed. But here the SDF cares about people, they are solving all problems, and there is no more corruption, unlike in the past there are no bribes.”

It is a common sentiment. A young Arab lady I meet in the market who won’t give her real name and tells us to call her Nour, is still afraid the current stability is short-lived, says: “Now there is government and institutions, and in case there is any problem, we go to the civilian council, and they solve it”. I ask her about Turkish claims the Manbij Civilian Council (MCC) is illegitimate because of the predominance of Kurdish forces in a majority Arab city, she says: “We didn’t see something like that, on the contrary, if we have a problem and we take it to the council, we receive justice. Everything is available, and if we make a proposal or suggestion, we get a response.”

Like almost every Syrian town and city, everyone here has a horror story to tell from the recent past, nevertheless, when asked about the future, the progress that they have seen to date in Manbij gives them cause for hope.

And hope is something they look for everywhere, locals took symbolic reassurance from a small bush in a central square that now serves as a bus station, but was recently ISIS’ site for public executions. They say it grew spontaneously, and defiantly, on top of a hole where the body of a woman stoned to death was discarded.

Now, the concrete changes around them offer comfort. Another young shopper who won’t give her real name says: “The last few years, there was no life for us, we just lived eating and drinking, everything was prohibited. But right now things have progressed, and Manbij has developed. Thank God all the institutions, schools, everything has reopened and is better than before. Honestly we didn’t expect this development.”

Round the corner, the Manbij Civilian Council is inaugurating its Women’s Council, run exclusively by women to deal with issues that affect them. Many relate to their suffering from the legacy of ISIS rule under which they were forced to marry, saw their husbands and sons executed and remain traumatized by the group’s brutality toward women.

Overseeing the event, Co-Chair of the Executive Committee of the MMC, Zeynab Jamil Kamar says of the arrival of the SDF in Manbij, many of whom are female fighters: “[the women in Manbij] saw freedom and people who came embodying democracy and equality, from all parts of society. So women were motivated by these people and were especially inspired by those women holding rifles and weapons,” she says referring to the cohorts of female fighters in the SDF that have attracted global admiration.

The turnaround of Manbij’s fortunes has also served as valuable PR, if not a blueprint for the SDF as they take the helm in the battle for Raqqa. Following months of warnings from Ankara that the Kurdish-led forces will be rejected by the majority Arab population in Raqqa, Kamar says Manbij’s progress has served as “a model for other Syrian cities. The future of Syria is very important for us we are rebuilding the city and building a new generation.”

Not only has Turkey’s push to be invited into the battle for Raqqa at the expense of the SDF been snubbed by its NATO partner the US, but Kurdish officials have made clear that once they liberate Raqqa, like Manbij, the city will be incorporated into their burgeoning federation that Ankara so fears.

For the most part, the war-weary population of Manbij receives Turkey’s threats to kick out the SDF from their city with contempt.

An elderly man, Mahmoud, calls Erdogan an “occupier.” He says: “We don’t want Turkish involvement, the situation here is very good and comfortable.”

So dreaded is the prospect of Turkish disruption of their newfound peace, the American buildup of troops in Manbij is broadly accepted even if like Zacharia they feel their authorities are “submissive” to their American allies.