The Russian President Vladimir Putin has replaced several governors and regional representatives as well as one ambassador. He also merged the Crimean Federal District with the larger Southern Federal District. 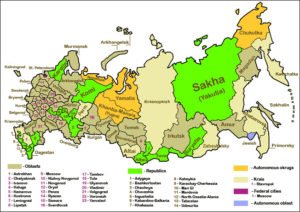 Map of constitutional entities of the Russian Federation, not to be confused with the federal districts of the presidential administration

The former representative for the Crimean Federal District, Oleg Belaventsev, was appointed to the same position in North Caucasus Federal District, replacing Sergey Melikov. Meanwhile Melikov takes up the post of first deputy head of the Russian National Guard (Rosgvardiya) – the federal law enforcement agency formed in April this year.

Senator for the Crimean Republic Sergey Tsekov told RIA Novosti that the merger was a pre-planned move, as the Crimean Federal District was created purely to allow for the smooth transition of the region into the Russian Federation.

The governor of the Russian Baltic exclave of Kaliningrad, Nikolay Tsukanov, was reassigned as representative to the Northwestern Federal District. The head of the regional branch of the Federal Security Service (FSB), Evgeny Zinishev, was appointed acting governor in Tsukanov’s absence.

Former Northwestern representative Vladimir Bulavin was appointed head of the Federal Customs Service to replace Andrey Belyaninov, who resigned on Thursday after investigators searched his home as part of a major smuggling case in which Belyaninov is a witness.

Putin reassigned the acting governor of Sevastopol, Sergey Menyailo, as representative to the Siberian Federal District. Dmitry Ovsyannikov was appointed acting Sevastopol governor until a new city head can be elected.

Another governor who lost his post on Thursday was Nikita Belykh from the Northern Russian Kirov Region. Belykh is currently in custody as investigators probe his involvement in a major corruption scandal. His lawyer has told reporters that Belykh received news of his dismissal “with understanding,” but insisted on his innocence. Former head of the Federal Service for State Registration Igor Vasilyev was appointed acting governor of Kirov Region.

Later on Thursday the presidential press secretary Dmitry Peskov told reporters that the main objective of the reshuffle was a bid to improve the effectiveness of state administration.

“This is not related to a staff reshuffle in the FSB and it is not directly related to the [September] elections. This is just a normal rotational work connected in part with the necessity to boost effectiveness and, in some cases, with making corrections in places where the rates of development could be better. This is an ordinary rotation,” Peskov said.

Also on Thursday, the president ordered that Russian Ambassador to Ukraine Mikhail Zurabov be relieved of his duties. Sergey Toropov was appointed acting ambassador, the Foreign Ministry said in a press release.

Federal districts were introduced in the Russian Federation in 2000 as form of division used by federal agencies and the presidential administration for the purposes of control over execution of various programs. A presidential representative reporting directly to the head of the state is appointed to each such district.

These administrative regions should not be confused with the federation subjects, which comprise the 85 regions, internal republics and major cities that have their own legislatures and elected leaders.

The federal districts of Russia are groupings of the federal subjects of Russia. Federal districts are not provisioned by the Constitution of Russia and are not the constituent units of the country. They exist purely for the convenience of operation and governing by federal government agencies. Each district includes several federal subjects and each federal district has a presidential envoy titled a Plenipotentiary Representative of the President of the Russian Federation in a Federal District.