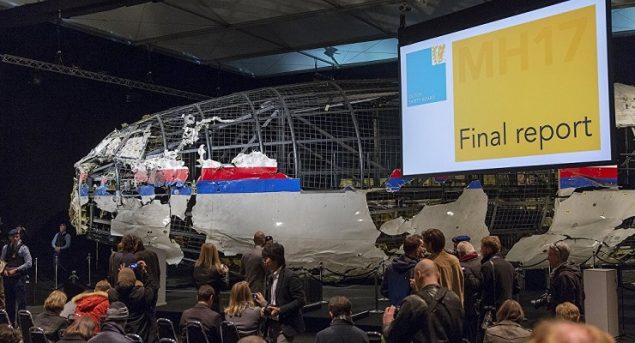 Malaysian Prime Minister Mahatir Mohamad sent shock waves in a public speech where he dismissed a Dutch “official” report blaming Russia for the downing of Malaysia Air Flight 17 in July, 2014, weeks after a CIA-led coup toppled the elected President of Ukraine. Despite the downplaying in western mainstream media of the Malaysian leader’s comments, it is creating a major new potential embarrassment for ex-Vice President Joe Biden and his Ukraine collaborators such as Igor Kolomoisky, in their flimsy effort to blame Russia for their own misdeeds.

During a dialogue with the Japanese Foreign Correspondent Club May 30, Mahatir challenged the Dutch government to provide evidence for their claim that the civilian Malaysian MH17 jet that crashed in Ukraine was shot down by a Russian-made BUK missile fired from a Russian regiment based in Kursk. The Malaysian Prime Minister told the Japanese media, “They are accusing Russia, but where is the evidence? We know the missile that brought down the plane is a Russian type missile, but it could also be made in Ukraine.” The blunt-spoken Mahatir added, “You need strong evidence to show it was fired by the Russians; it could be by the rebels in Ukraine, it could be Ukrainian government because they too have the same missile.”

He went on to state, “We don’t know why we are excluded from the examination but from the very beginning, we see too much politics in it, and the idea was not to find out how this happened, but seems to be concentrated on trying to pin it to the Russians.“

The Malaysian Air MH17 was en route from Amsterdam to Kuala Lumpur when it was shot down over the conflict zone in eastern Ukraine on July 17, 2014. Only in May 2018 the Dutch-led Joint Investigation Team issued its report alleging that a BUK missile was used to shoot down Malaysia Airlines Flight MH17, claiming that it originated from the 53rd Anti-aircraft Brigade of the Russian Federation, stationed in Kursk near the Ukraine border. The Dutch Joint Investigation Team (JIT) declared that it “has come to the conclusion that the BUK-TELAR that shot down MH17 came from 53rd Anti-aircraft Missile Brigade based in Kursk in Russia,” according to top Dutch investigator Wilbert Paulissen. Paulissen added, “We are convinced that our findings justify the conclusions…”

The Dutch-led group presented no concrete forensic proof, and Moscow has repeatedly denied involvement in an act that would make no military or political sense for them. In 2018 the Russian Defense Ministry provided evidence that the BUK missile which had exploded to destroy the Malaysian passenger jet had been manufactured in a Russian plant in 1986, and then shipped to the Ukraine. Its last recorded location was at a Ukrainian military base.

By recasting doubt on those Dutch JIT conclusions, Mahatir has potentially opened a can of deadly worms that could come to haunt the Ukrainian government at the time, especially Igor Kolomoisky, the billionaire Ukrainian financial backer of the newly elected Ukrainian president Volodymyr Zelensky. It potentially could also implicate then-Vice President Joe Biden and many others.

Independent investigators into the destruction of MH17 stress the fact that the Dutch-led JIT deliberately excluded Malaysia as well as Russia from their group, but included the CIA-backed coup regime in Ukraine, hardly an unbiased party. Further, all telephone taps the JIT has presented as proof of the guilt of the Russians came from the Ukrainian secret service SBU. Since the CIA-backed coup in Ukraine in 2014, the SBU has been involved in repeated fake accusations aimed at Russia, including faked murder of a journalist later revealed to be quite alive.

One of the central issues that the Dutch JIT group never addressed is why, at a time it was a known warzone, and commercial international flights were told to avoid the airspace in eastern Ukraine, the MH17 flight was reportedly ordered by Ukraine air traffic control authorities in Dnepropetrovsk to change course and to fly directly into the war zone. According to a Dutch site, Post Online, Eurocontrol, European Organisation for the Safety of Air Navigation, gave information to the Dutch Parliament about the status of Ukraine radar in 2016 informing that the Ukraine air traffic control organization UkSATSE failed to inform Eurocontrol in summer 2014 about the non-operational status of three radar systems in Eastern Ukraine, a grave violation of law. One of the three was taken in the wake of the CIA Ukraine coup in April by a masked band that destroyed the radar facility.

Further, in another breach, the Ukrainian UkSATSE refused to permit their air traffic controller at Dnepropetrovsk, responsible for controlling flight MH17, to be questioned. According to Russian reports, the person “went on vacation” and never reappeared.

Notably, at the time of the MH17 downing, the Ukrainian governor of the Dnepropetrovsk Oblast or region, was Igor Kolomoisky. Kolomoisky, who is listed as the third richest man in Ukraine with an empire in oil, coal, metals and banking, was also reported to be directly linked via offshore entities to control of Burisma, the shady Ukrainian gas company that named the son of then-Vice President Joe Biden to its board.

Kolomoisky, who is notorious for hiring thugs and neo-nazis to beat up business and other opponents in Ukraine, reportedly secured the lucrative Burisma post for Hunter Biden, despite Biden’s lack of any experience in Ukraine or in oil and gas, in return for Joe Biden lifting Kolomoisky’s US visa travel ban. Joe Biden was the Obama Administration point person in charge of the 2014 CIA-orchestrated Maidan Square coup and toppling of the elected President Viktor Yanukovych.

Notably, the Mahatir remarks have drawn attention anew to the mysterious circumstances around the downing of Malaysian Air MH17 in 2014 and the potential role of Kolomoisky and others, in that. The role of corrupt Ukraine officials backed by the Obama Administration, is now under scrutiny.

Notably, the new President of Ukraine, Volodymyr Zelensky, is widely reported to be a protégé of Igor Kolomoisky. Zelensky became a national name as a comedian on a Ukraine TV station owned by Kolomoisky, and the latter reportedly provided funds and personnel to run the comedian’s victorious May 2019 election campaign in which he defeated incumbent Petro Poroshenko, a bitter foe of Kolomoisky. Following Zelensky’s election victory, Kolomoisky returned to Ukraine after exile in Switzerland following a bitter falling out with Petr Poroshenko in 2015.

All these pieces of a very murky geopolitical puzzle underscore the dirty role that Ukraine and the Obama administration have played in demonizing Russia as well as the Trump Administration. Most recently, it appears that the US Special Counsel Robert Mueller and his staff, relied on a Ukrainian businessman named Konstantin Kilimnik, who worked for Trump campaign chairman Paul Manafort, as the key figure supposedly linked to Russian intelligence, as a key figure to make the case of Russian collusion or interference in the 2016 US elections.

Far from a Putin agent, however, new evidence shows that Kilimnik, since at least 2013 was a confidential Ukrainian informant to the US State Department, according to US journalist John Solomon. Solomon cites FBI documents including State Department emails he has seen where Kilimnik is described as a “sensitive” intelligence source for the US State Department. The Mueller report left that embarrassing detail out for some reason. Kilimnik worked for Paul Manafort who before the 2014 Ukraine coup had served as a lobbyist for Ukrainian elected president Viktor Yanukovych and his Party of the Regions.

Their shadowy acts in Ukraine may soon come to haunt key figures in Ukraine such as Kolomoisky, as well as people like Joe Biden and family. From the true authorship of the downing of MH17, which Dutch and other investigators believe was linked to Kolomoisky actors, to the Ukraine business dealings of Hunter Biden to the true facts of the Mueller “Russiagate” probe, all could well prove to be a far more revealing investigation for the US Justice Department than the obviously biased Mueller probe has been. Increasingly it is looking like the Ukraine and not Russia is the more likely source for interference in the 2016 US election, and not in the way we have been told by the establishment media such as CNN.

F. William Engdahl is strategic risk consultant and lecturer, he holds a degree in politics from Princeton University and is a best-selling author on oil and geopolitics, exclusively for the online magazine “New Eastern Outlook.”