Long live the Queen of Chaos 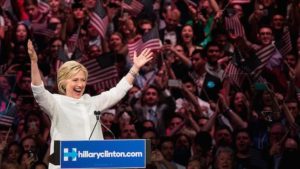 For those to whom this hasn’t yet occurred, if Hillary Clinton is elected President she will be President. The Democratic Party platform, Bernie Sanders’ program proposals and Mrs. Clinton’s theorized move Left will be but distant memories. If Mrs. Clinton brings with her a Democratic Congress (or not) she will use it to pass the TPP and TTIP ‘trade’ agreements, to launch ‘liberal’ wars across the Middle East and rattle sabers against Russia, she will re-launch the ‘Grand Bargain’ to cut Social Security and Medicare under the pretext of a fiscal crisis and should Wall Street falter, she will ‘hold her nose’ and once again bail out her benefactors. This is the program her supporters are voting for.

By analogy, when Barack Obama entered office with a Democratic Congress in 2009 he had the best opportunity since the early 1930s to enact a new New Deal in favor of social justice and against the forces of neoliberal militarism. After bailing out Wall Street and institutionalizing the worst ‘unitary President’ excesses of the George W. Bush administration Mr. Obama ran and won again in 2012 on the well-instantiated delusion that once freed from having to run for office again he would be the ‘progressive’ his supporters always thought him to be. This despite his self-description as a ‘moderate Republican’ and his actual record at the center of the Democrats’ three decade turn to the political hard-right.

The Democratic Party line that a vote for Green Party candidate Jill Stein or a write-in vote for Bernie Sanders is a vote for Donald Trump overlooks that establishment Democrats rigged the primary process in favor of Mrs. Clinton and that it is their policies that are responsible for widespread political disaffection. The odds have it that if a vote were taken to exile both Party establishments to poorly provisioned outposts on Mars they would be on the way there now. What is so frighteningly irresponsible about Mrs. Clinton’s insertion / assertion as the Democratic Party candidate is the same problem posed by Barack Obama’s posture as a ‘progressive’ President— it leaves the radical right as the only alternative for disaffected voters.

The illusion of political choice only works as long as the status quo functions in some basic sense. The recurring financial bubbles from Savings and Loan deregulation (1980s), privatization and equitization of government-funded research in the tech boom – bust (late 1990s) and the housing boom – bust demonstrated the fleeting nature of Wall Street fueled ‘prosperity.’ With the Middle Class on the ropes, the working class all but disappeared and the poor desperately clinging to the few crumbs that fall to them, the U.S. is but one recession away from being economically (and politically) untenable. The only programs that Democrats have— ‘free-trade,’ private debt fueled consumption, deregulation, privatization and Wall Street bailouts, are proven losers for all but a few in 2016.

One of the reasons the American political leadership needs foreign ‘enemies’ is to divert attention away from the damage that nominal Americans do— Wall Street, corporate executives, the NSA and carceral state, trade deals that act as firewalls against social and environmental resolution and local government actors for corporate power (ALEC-American Legislative Exchange Council). Another is the ‘business’ of nominal governance, the nexus of state and corporate interests that promotes geopolitical tensions, fear and paranoia as business ventures from which profits are earned through mass destruction (Vietnam, Iraq). As the most despised candidate for U.S. President in recent history, Hillary Clinton needs foreign enemies.

Flip the Democratic Party script for a moment to consider that Vladimir Putin might have a point. Hillary Clinton is the most dangerous person on the planet because she is a neoliberal militarist who is absolutely immune from the consequences of the crises she creates. Armed with nuclear weapons freshly ‘upgraded’ by Barack Obama, Mrs. Clinton and the neocon cabal she hopes to lead have destroyed Iraq, Afghanistan, Libya and Syria, have surrounded Russia with NATO troops and weapons, staged a neo-fascist coup in Ukraine, supported a right-wing coup in Honduras and have indicated their intentions to proceed apace turning entire regions of the planet into chaotic rubble with body-counts already in the millions.

This isn’t speculation about some future state of affairs. Hillary Clinton sold U.S. sanctions against Iraq in which one-half million of Iraq’s most vulnerable citizens were starved and denied life-saving medicines to ‘teach Saddam Hussein a lesson.’ And the Clinton-Bush war against Iraq cost one million more innocent lives and created chaos across the Middle East. ISIS is a direct result of Clinton-Bush policies. The liberal pretense that the U.S. War of Aggression against Iraq was ‘Bush’s war’ requires overlooking the eight years of liberal bombing and sanctions that preceded it and that Bill Clinton gave Mr. Bush political cover for the war as his wife voted for it. The U.S. war against Iraq— catastrophe that it was / is, was as bi-partisan as they come.

The system that Mrs. Clinton and Donald Trump— past friends who attend each other’s public functions and private affairs and whose children thrive together in the closed lootocracy of officialdom, are vying against one another to ‘lead’ a spoils system where ‘leadership’ means the ability to arrange profitable outcomes for private interests through ‘public’ means. Neoliberal militarism is private profits created through public death, destruction and misery. The profits explain why Hillary Clinton is never held to account for deadly sanctions, gratuitous wars that turn into geopolitical catastrophes, social policies that turned the poorest 40% of the country into a beggar class and racist strategies like mass incarceration to divide the working class. Given her actual record, Black support for Mrs. Clinton is akin to choosing between AIDS and cancer.

Americans exhibit near-heroic aversion to history and the consequences of American policies that now constitute the core of the Democratic Party’s domestic agenda. The IMF has been pushing these policies on ‘client’ (victim) states for the last half-century. The capitalist lootocracy that the Democrats (and Republicans) serve has long installed puppet governments to reign with impunity as long as they deliver local wealth to back ‘up’ to it. The Clintons are corrupt puppets who serve this system of un-enlightened self-interest as domestic agents of international capital. The sooner the youth of America and the residual Left realize that there is no hope for a better, or even livable, future through establishment politics the sooner we can get to the task at hand: a (real) political revolution.

The title of this piece is taken from Diana Johnstone’s book Queen of Chaos. Rob Urie is an artist and political economist. His book Zen Economics is published by CounterPunch Books.

Hillary Clinton’s acceptance speech at the Democratic Party convention on July 28, 2016 is here.

Millions read CounterPunch, many fewer donate. Click here to support the cause.

As Hillary Clinton begins her final charge for the White House, her advisers are already recommending air strikes and other new military measures against the Assad regime in Syria.

The clear signals of Clinton’s readiness to go to war appears to be aimed at influencing the course of the war in Syria as well as U.S. policy over the remaining six months of the Obama administration. (She also may be hoping to corral the votes of Republican neoconservatives concerned about Donald Trump’s “America First” foreign policy.)…