Lithuania to adopt euro amid concerns about emigration

Lithuania to adopt euro amid concerns about emigration

Lithuania is set to adopt the euro as its legal tender amid concerns that its gravitation toward richer Europe could accelerate the rate of emigration out of the country. The Baltic country switches over to the euro on January 1, when Lithuanian leaders will withdraw their first euros from a bank machine in the capital, Vilnius, just after midnight. 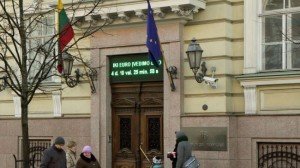 Digital clock at Bank of Lithuania in Vilnius displays countdown until Lithuania adopts euro on Jan 1, 2015

Lithuania is hoping that membership in the European Union’s official currency will bring a rise in investment and trade. Lithuanian President Dalia Grybauskaite said in a statement that the eurozone entry is an important step and symbol of “deeper economic and political integration with the West.”

However, Lithuania’s increasing integration with richer European countries has brought about a wave of emigration that has been emptying towns and causing worker shortage. Emigration has been on the rise since 2004, when the country of three million people joined the European Union. During the 2008-2011 financial crisis, more than 80,000 people left every year*, mainly to Germany, Britain, and other richer economies in pursuit of better salaries.

Pranciskus Sliuzas, a journalist and anti-euro activist, has described joining the euro as “one of the most stupid things of all time.”

Sarmite Mikulioniene, a sociology professor at Mykolas Romeris University in the capital, said, “There will simply be no one left to do simple jobs here in 10 or 15 years.”

Lithuania losing its litas to adopt the euro currency

On January 1, 2015 Lithuania will be the last Baltic nation to join the growing number of EU states to have adopted the euro. Like Estonia and Latvia, Lithuania is hoping for more investment and lower borrowing. 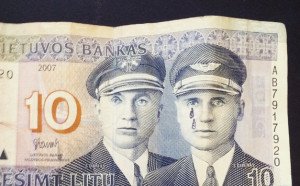 The switch coincides with steps towards greater energy independence and requests for more NATO troops in Lithuania, marking a new shift away from Moscow. But half those polled in this state of three million do not welcome the euro.

“It is all a horror movie,” elderly Laima Krecikiene said outside a supermarket by the border. “Don’t you understand? Can you imagine how little money people in the villages have? Just look at the prices, they shot up in anticipation of the euro.”

Market reforms and wider economic crisis have been tough for Lithuanians, driving many to emigrate. But few oppose its shift towards the West.

Russia’s move into Ukraine has awoken fears the Baltics could be next. NATO has scrambled its jets over 150 times this year after Russian sorties, three times more than last year. Moscow held surprise military exercises in neighbouring Kaliningrad in December with 9,000 troops and 55 ships.

Russian sanctions have hit Lithuania’s transport sector, which employs around 100,000, as well as its dairy industry.

While the aim may be to bring the country back into Moscow’s orbit, analysts say it is having the opposite effect, focusing business minds on the west and emerging markets like Asia.

“I think Russians are trying to educate us how to behave,” said Gitanas Nauseda, chief economist as SEB bank in Lithuania. “But among executives the mentality of having Russia in your strategic plan is disappearing.”

With Russia still accounting for some 20 percent of exports compared with 60 percent going elsewhere in the European Union, the government, which has been among the most vocal in Europe in denouncing Russia, says there is some way to go.

Prime Minister Algirdas Butkevicius said some businesses still did not appreciate the risks of dealing with Russia. “It’s better to work with less risky markets, make use of having a stable currency like the euro in Lithuania, have lower profits but long-term stability in business,” he told Reuters news agency.

A big step came in October when “Independence”, a floating liquefied natural gas import terminal, arrived under heavy guard in Lithuania, marking the end of the Baltic state’s reliance on Russian gas by allowing it to import from countries like Norway as well.

While a Russian crisis could upset forecasts, the central bank says euro zone membership could add 1.3 percent to GDP in the long term.

The economy is expected to grow 2.9 percent this year. Massive public spending cuts coupled with an economic crisis saw Lithuania’s GDP shrink by 15 percent in 2009, a drop that took until 2014 to recover.

Now Lithuania seems healthier than many EU economies, but central bank head Vitas Vasiliauskas said it could not relax. “The euro gives you a lot of opportunities. At the same time you must move forward with reforms,” he said in an interview.

Deeper problems include creaking education and health systems and the brain drain, and even businesspeople are sceptical about the benefits of joining the euro.

Visvaldas Matijosaitis, CEO of Viciunai Group, producer of frozen products that exports to 56 countries and employs 7,500 people, complained of a shortage of skilled labour – his company is forced to bus in workers from 100 km away.

“Productivity is not what it is in the West,” Matijosaitis said, as lines of women filleted fish by hand nearby. “A lot of investment would be needed to raise productivity.”

Asked if the euro would help, he did not hesitate. “It changes nothing,” he said.

Background:
* According to a June 2014 study of immigration and emigration in Lithuania, emigration has averaged 40,000 people per year during the past ten years. Around one fourth of the country’s population, close to 800,000 people, have emigrated since independence in 1990.