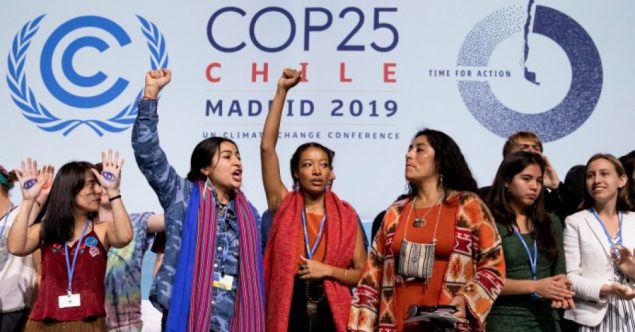 Representatives of the 14-nation Lima Group walked out of the assembly hall at the time of the speech given by Venezuela’s Foreign Minister Jorge Arreaza at the COP25 summit in Madrid. One of the countries that participated in the boycott of Arreaza’s speech was Chile, which is exercising the presidency of the summit.

One aspect of the boycott goes beyond absurd in that it is nothing short of tragic. By making a political statement against the Maduro government, the Lima Group is politicizing a conference that is addressing the problem of climate change which threatens civilization as we know it and future generations. Such a decision is irresponsible, especially because of the imminence of a climate disaster which is already manifesting itself to the detriment of millions of people throughout the world.

But the decision of the Lima Group is also absurd and pathetic when you consider that the fierce repression against protesters in Chile in real time includes the use of rubber bullets that have resulted in 200 reported victims who have lost sight in one or both eyes. Does the repressive regime of Sebastián Piñera have the moral right to criticize another government for alleged violation of democratic norms?

Another absurd and pathetic aspect of the boycott is the statement of Juan Guaidó’s representative in Spain, Antonio Ecarri, who justified the move saying that the “usurper” Arreaza was sent by the “regime that is the biggest depredator of the environment in Latin America.” Does Ecarri not know that the Foreign Minister Ernesto Araujo of the Bolsonaro regime of Brazil, another member of the Lima Group, claims that climate change is a “Communist plot”? This is not to mention Bolsonaro’s encouragement of forest clearing by cattle ranchers which led to this year’s devastating fires in the Amazon rainforest.
How ironic! The COP25 originally was to take place in Brazil, but Bolsonaro reneged on the nation’s previous offer, obviously because of his refusal to take seriously the issue of climate change. Then it was to be held in Chile, but at the last moment Piñera (whose acceptance according to surveys has reached low of 4.6%) backed out because of the protests against his government and the concomitant police repression.
Those who are ambivalent about the international campaign against Maduro, which includes stringent sanctions and the threat of military intervention, should consider that at the helm of that campaign are right-wing governments whose positions on climate change and democracy are absurd, if not pathetic.
Editors’ Note: While we don’t necessarily share the views we publish on New Cold War, we do attempt to provide readers with a range of views. This is because your right to make your own mind up depends on your being fully informed.
Share
Tweet
Share
Pin