Letter to Toronto Star: ‘Your presentation of the war in Ukraine is exceptionally one-sided’

I am very disappointed as well as disturbed by the article on Ukraine by your global economics reporter published in the Star on Dec. 23. 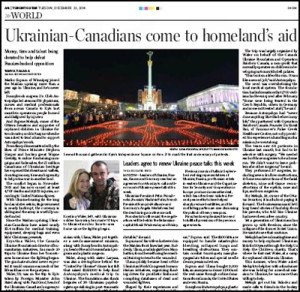 Your presentation of the war raging in eastern Ukraine is exceptionally one-sided and ill-informed. You offer no indication of who or what is responsible for the war. You make a very shallow and selective description of the humanitarian consequences for the people of the affected region, leave alone the entire country. And you give no indication of whether Canadians should be concerned over the side that the government in Ottawa has chosen in this war.

You do not report that the Ukrainian government, supported by Canada and by the NATO powers, has been bombarding the towns and cities of eastern Ukraine during the past seven months, including with the use of cluster weapons. You do not report on the people of the combat zone, including children, forced to live for months on end in bomb shelters, and those more than 1.5 million people who have been forced to flee the war zone for their safety, most to Russia.

Amnesty International is the latest human rights agency to raise concerns that the war being prosecuted by the Ukraine government in the east of the country is having calamitous humanitarian consequences. Human Rights Watch and the Special Mission for Ukraine of the Organisation for Security and Cooperation in Europe have raised similar concerns. Most recently, Amnesty is condemning the blockading by the extreme-right militias that are allied with the Kyiv government and its armed forces of humanitarian shipments to eastern Ukraine.

Throughout this year, the Toronto Star has neglected to report that part of the news from Ukraine that does not fit your ‘blame Russia’ editorial narrative. I recently published a lengthy commentary on the same methodology practiced by your media colleagues at the Globe and Mail, including its reporter in Ukraine, Mark MacKinnon.

But it gets worse. In the aforementioned article of Dec. 23, your writer promotes the ‘Patriot Defense’ fundraising campaign. It funds ‘first aid’ kits and training, “being provided to members of the special Battalions, the National Guard, the Army and the Border Service and other security agencies. We are working together with Ukraine’s Ministry of Defence”.

The mentioned ‘Battalions’, ‘National Guard’ and ‘other security agencies’ are the notorious paramilitary units of the fascist and other extreme-right political forces in Ukraine. They are responsible for countless atrocities in eastern Ukraine. They are also acting as shock troops of the wide-ranging suppression of political rights that is taking place in Ukraine, including the Odessa Massacre of May 2, 2014 that saw more than 40 anti-fascist protesters burned alive in an arson attack by the extreme right against the large, trade union headquarters building in that city where protesters had taken refuge. 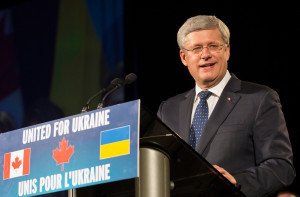 Stephen Harper speaks at ‘United for Ukraine Gala’ in Toronto on Sept 11, 2014, photo by Office of the Prime Minister of Canada

The Ukraine extreme right is very active in your city of Toronto. This is not the first time you and your newspaper are unwittingly promoting its activities. The ‘United for Ukraine Gala’ fundraising dinner about which you glowingly reported on Sept. 11 was organized by the Canadian Ukrainian Congress and featured the participation of Prime Minister Stephen Harper. Two of its events in Toronto this year featured the participation of the Right Sector fascist political party/agglomeration. These were the ‘Ukraine Independence Day’ commemoration on August 23 and the one-year commemoration of the ‘Maidan’ movement on November 29.

The August event saw the participation of the cream of Ontario’s political elite, including Minister of Citizenship and Immigration Chris Alexander, Ontario Premier Kathleen Wynne, Mayor Rob Ford, his city councillor brother Doug Ford and Toronto mayoral candidates John Tory and Olivia Chow. (John Tory was elected mayor of Toronto on Oct. 27.) Premier Wynne gave a vigorous speech there in support of the war being waged by Kyiv (what it calls an ‘anti-terrorist operation’).

At the November 29 event, NDP MP Peggy Nash shared the stage with a Right Sector operative brought all the way from Ukraine for the event–Valeriy Chobotar. Nash is reported as saying, “… it is important to stand firm against Putin and the foreign aggression of Ukraine, and we cannot ever accept the loss of Crimea or the loss of the territories in the east. We have to stand firm in solidarity with Ukraine!”

Elected representatives from the Conservative and Liberal parties gave greetings to the event and Premier Wynne sent written greetings.

If the ‘Right Sector’ was an organization of discernible connection to the Muslim faith, mainstream media would be raising a hue and cry that Premier Wynne, MP Peggy Nash and other political figures like them are aiding and abetting terrorism. But it seems Ukrainian fascism is becoming acceptable, if not fashionable. Indeed, the weekly French women’s fashion magazine Elle published a glamour news and photo story in its issue of Nov. 14, 2014 of the ‘heroine’ paramilitaries who are fighting in Kyiv’s war.

I sympathize with war veterans today who are looking aghast at the Canadian, U.S. and other NATO governments working hand in glove with the ideological descendants of those against whom their countries went to war 75 years ago. I share the views of U.S. journalist Robert Parry who is sharply critical of what he calls the “liberal idiocy” of mainstream news reporting on Ukraine that sees it playing with fire—potentially calamitous military confrontation—in eastern Europe.