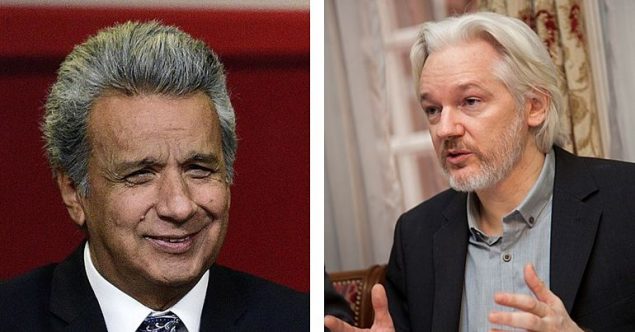 This is part 3 of a 3-part interview with Guillaume Long, the former foreign minister of Ecuador. Part 1 covers lawfare in Latin America, and part 2 covers systemic corruption. The interview has been edited in part for clarity.

On 22 September, Julian Assange will have served his sentence for “skipping bail” while exercising his right to political asylum in the Ecuadorian embassy in London. The UK will keep him in jail anyway, awaiting a hearing process on extradition to the US for charges under the Espionage Act. Tomorrow, in other words, Assange will effectively become what many outside of the excruciating groupthink of the corporate media have long understood: a political prisoner.

The Canary spoke exclusively with Ecuador’s former foreign minister Guillaume Long about how the UK aggressively pressured his government to hand Assange over, and the current Ecuadorian president Lenin Moreno’s historic betrayal of the WikiLeaks publisher.

You previously said in relation to Assange’s residence in the Ecuadorian embassy in London that the UK was putting the most pressure on Ecuador. In what ways?

I can tell you in general… how tense the situation was. Certainly the British governments… were very aggressive towards Ecuador, and wanted Ecuador to expel Julian Assange. They said it in a very forthright [way]. In diplomacy you have different levels of directness, and I think they used the maximum level – very aggressive.

What strikes me in hindsight is that… you would have a meeting with an official and he would look into your eyes, speak to you face to face, and pretty much say ‘you guys are paranoid’, in these words or other words: ‘The only thing we’re interested in’ – and this was reiterated time and time again by British authorities in private meetings with them –… ‘is the Swedish sexual allegations, and the right of the Swedish women to justice’.

We didn’t have a problem with that outcome. Actually, Assange didn’t have a problem with that outcome, when he talked to us, or his lawyers talked to us. But we wanted to make sure that what we were concerned about – which was the journalistic activities of Mr Assange – wouldn’t lead to an extradition. From Britain to the United States, or from Sweden to the United States.

In addition to US charges related to WikiLeaks revelations, of course, Assange faces a rape allegation in Sweden. Swedish authorities reopened this investigation at the request of the accuser’s lawyer. Notably, though, Assange’s residence in the Ecuadorian embassy was for political asylum; indeed, no government would provide asylum to somebody seeking to escape rape allegations. The Canary takes seriously the sexual assault allegations and believes that no allegations of sexual assault or rape should ever become politicised by either side.

Do you think Lenin Moreno essentially betrayed Assange, in Rafael Correa’s words at least, and made the faeces on the walls allegations because of similar pressure being put on him. Or was it to do with a vindictiveness over the INA papers [corruption allegations against Moreno and his family] that the WikiLeaks social media pages were sharing. Or perhaps a combination of the two?

So I think there are a number of reasons why he did this: one of the fundamental reasons is realignment in the US sphere of influence… And, of course, all sorts of security and foreign policy doctrines that have changed. Assange is a consequence, I would say, of the new pro-US doctrine.

Right now Moreno’s got a sort of pact… that he’s not going to be persecuted for it. But things change in politics, suddenly you find yourself not in power or favour anymore. So I think that Moreno is seriously thinking, once his presidential term comes to an end in 2021, is to leave the country and to flee. And in order to have that protection he needed a strong pact with the country I think he is planning to flee to. I think he’s really trying to be the best pupil in the submissive class in order to be able to benefit from that sort of long-term pardon… to become a fugitive from Ecuadorian justice in the future…

He knew he had to violate international law, and he knew that that was going to have consequences, and so they had to prepare the terrain for that decision. And so they did it through the typical pathologisation of Julian Assange as a crazy man, who had strange living habits, who had hygiene problems… [and] didn’t do the washing up. It is quite humiliating for Ecuador but also for the international press, for the global debate to have sunk that low on such an important issue: an issue that has to do with freedom of expression, with asylum law, with cybersecurity, anything to do with Huawei and 5G to US imperialism, Iraq, freedom of expression, whistle-blowers. You name it, Assange is at the centre of a lot of global debates – and they made it about faeces on the wall.

I know that embassy very well. I went frequently, I was foreign minister. Assange had a good respectful relationship with diplomats when I was there…

Also, at one point the Moreno government decided to put Assange under a regime of total isolation. I think what they were hoping was that Assange would walk out of the embassy by his own will and they wouldn’t have to expel him – a form of torture, as denounced by the special rapporteur on torture… Basically [I think] they wanted Assange to crack, give in and walk out – they failed, they underestimated his resilience.

What they did also was to change all the diplomatic staff around him – they changed the ambassador, they changed everyone in diplomacy, and gave new instructions. Obviously, his predecessors had developed certain ties… he was treated absolutely humanely so there was a relationship there. But the new authorities, the new diplomats, were given probably I suspect instructions to make it living hell for him.

And so that’s just a corollary of that strategy on behalf of Moreno – smearing him in order to make it possible in media terms for Ecuador to expel him from the embassy.

Assange wrote at length about the dangers of digital imperialism, and how this can manifest itself through corporate social media or search engine algorithms. Rafael Correa was a victim of this – he was taken off Facebook, and recently Cuban accounts were taken off Twitter. So as a smaller Latin American country, how might, in government, you deal with these kind of massive information monopolies against you?

That’s the great challenge of the 21st century. New forms of control, new forms of domination, digital imperialism – is a clear example of that. It goes to show how a science and tech symmetry is going to create these new types of centre-periphery relations, and new types of domination… Here is a clear case of the importance of the integration mechanism. When we were in UNASUR, or CELAC, which is the Latin American and Caribbean community of states, we always raised our voice saying that we needed to create digital sovereignty, and platforms where we could keep our digital social contract safe, and also have control over the information.

We knew this wasn’t something that we were going to construct from one day to the next, but if we united… we could have collective policies. This is exactly why organisations like UNASUR and CELAC exist – you can have a collective effort where states wouldn’t [otherwise] have the capacity…

We need our own apps, we need our own social networks – and the people who understood that are the Chinese. But not all of us have the science and technology capacity that the Chinese have… What you need to do is unify Latin American countries…