‘Torture, murder and death camps’ for gays and lesbians in Chechnya has been downgraded by Western media to ‘arbitrary detentions’. 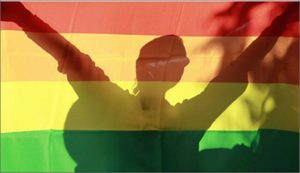 Beginning in April 2017, mainstream Western media and anti-Russia alternative media has been abuzz in reporting ‘torture camps’ in Chechnya for gays, lesbians and transsexuals in the Russian republic of Chechnya. Many victims are being killed, says the outcry.

Human rights organizations have taken up the cause. Amnesty International, for example, issued an appeal on April 4, decrying that “Men believed to be gay are being abducted, tortured or even killed in Chechnya as part of a coordinated campaign with impunity.”

Human Rights Watch gave the ‘killings’ side of the story a spin, as reported by Associated Press, in saying that Chechen authorities have “sometimes” been encouraging families of gay men released from detention to kill their errant offspring.

A petition effort by Avaaz launched in April reads “Chechnya is rounding up gay people and taking them to torture centres, and it’s as horrific as it sounds. Men are being electrocuted, tortured until they reveal names of other gay people, and beaten so badly that some have died.”

Avaaz says what is happening is “something like the Nazis would do.” Its petition has received more than 1.5 million signatures.

German Chancellor Angela Merkel got into the act during a meeting on May 2 with the Russian president.

The scandalizing has stemmed from one, single source: an article series in the anti-government, liberal newspaper in Russia Novaya Gazeta, beginning on April 1. That’s it. One searches in vain for any other verifiable source. Not to worry: the Guardian’s anti-Russia writer Shaun Walker assures us on April 13 that the Novaya Gazeta writer (unnamed by Walker) is “an author regarded as a leading authority on Chechnya”.

A May 11 article in Associated Press reports a recent change in tune in the campaign. Now the campaign speaks of “arbitrary detentions and torture of gay men”, with no one, apparently, being killed. Once again, we are left to trust the word of the news agency and, in particular, the voices of the advocates of the campaign in the West and among the liberal opposition in Russia.

Update: The New York Review of Books daily bulletin for May 19, 2017 returns to the ‘mass killings’ theme with a claim that “160 men were arrested, fifty were killed, and most of the rest were savagely beaten” in Chechnya. Incredibly, the story provides no hint of when or where in Chechnya the alleged atrocity occurred. The NYRB Daily story is titled ‘Putin’s Monster’, referring to Ramzan Kadyrov, the leader of the Republic of Chechnya, which is an autonomous constituent of the Russian Federation.

The AP article reports on the detention in Moscow on May 11 of five activists protesting the alleged mistreatments in Chechnya. At least one of the activists is a foreigner, an Italian. The five were soon released from detention. AP carries a selfie photo of the five activists smiling from inside a police van. 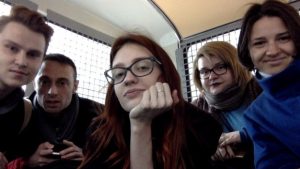 Photo of five gay rights activists in Moscow who say they were detained in Moscow on May 11, 2017 for advocating LGBT rights (photo by one of the detained, via Associated Press)

The AP story is embellished by Canada’s anti-Russia state broadcaster, the CBC, with additional information from Canada on the efforts of some to have the Canadian government raise a hue and cry on the international stage.

An April 22 article by the CBC gave prominence to the story by reporting on a protest that day by a handful of people in Toronto against the alleged abuses taking place in Chechnya. The CBC cited “allegations of several killings and up to 100 men being detained in secret prisons in the Russian republic [of Chechnya].”

A spokesperson for Rainbow Railroad, one of the sponsors of the Toronto action, lauded Canada’s human rights record, telling the CBC, “We need to honour the Canadian values of inclusively and acceptance and being welcoming to people — and make it easier for people who’ve experienced persecution to claim refuge in safer countries like Canada.”

‘Disappeared’ from this rosy historical record is Canada’s long, violent record of suppression of homosexuality. Criminal violence against gays and lesbians remains part of Canadian society today, as does torture in Canada’s prison systems in the form of solitary confinement. Not to speak of the more than 1,100 women, mostly First Nations people, whose disappearances and presumed murders during the past several decades are the subject of a full-scale commission of inquiry underway in Canada.

Meanwhile, what is actually taking place in Chechnya? We do not have details in the English language because Western media conducts a boycott of news reporting from Russia except when extraordinary events prompt a round of ‘on the spot’ reporting crafted to reinforce negative stereotyping of Russia and its people.

RT reports on May 5 that Russian President Vladimir Putin has requested that Russian Commissioner for Human Rights Tatyana Moskalkova investigate and prepare a report on the acusations leveled against Chechnyan authorities. The same RT report contains a vigorous denial of the accusations voiced by the head of the Chechnyan republic, Ramzan Kadyrov [the “monster” of the NYRB Daily headline above].

Perhaps the Russian government could be faulted for not acting more quickly to bring to light whatever truth or half-truth that might underlie the accusations of suppression of LGBT rights in Chechnya. Or maybe it is just, plain hard-pressed to find the time and resources to put out the many fires sparked by anti-Russia accusations emanating from the West. After all, Russia is rather preoccupied with the large and growing military threat against it by the NATO countries along its border with Europe. Not to speak of Russia’s effort to prevent ‘regime-change’ chaos in Syria from spreading to its own borders, as those spreading the chaos would like to see. Sadly, ‘human rights’ organizations in the West as well as mainstream Western media appear utterly unconcerned about all this, even when there is a nuclear threat underlying the NATO threats and aggression.

What’s more, perhaps the Russian people and government can detect the unmistakable sign of hypocrisy in the latest accusations over Chechnya. The same LGBT rights and human rights organizations speaking up about Chechnya are rather unconcerned about the very real threats to gays, lesbians and transsexuals in today’s, right-wing Ukraine.

Ukraine turned sharply to the right and became a NATO pawn following the overthrow of its elected president in February 2014. Thousands have died and millions have been displaced by the civil war launched by right-wing, ‘Maidan’ Ukraine in eastern Ukraine. The silence in the West over THAT ongoing tragedy is deafening.

Human rights in Ukraine after the Euromaidan, by Volodymyr Chemerys, translated to English by New Cold War.org and published in CounterPunch, January 22, 2016.

MOSCOW – Chechnya’s leader Ramzan Kadyrov will organize a trip to his homeland for the Finnish reporter who asked Russian Foreign Ministry Spokeswoman Maria Zakharova a question about alleged persecution of gay people in that Russian North Caucasian region, Kadyrov said in an interview with Life news on Wednesday…

During her May 31 press briefing, Zakharova called on Kadyrov to organize a trip to the republic for the Finnish reporter interested in alleged persecution of LGBT people in Chechnya.

On April 1, Novaya Gazeta published an article on its website entitled “Murder of Dignity” which referred to some alleged abductions and possible killings of Chechen residents over their non-traditional sexual orientations or on suspicion of being gay. The paper cited anonymous sources in law enforcement agencies and also victims, without revealing their names…