‘The last battle’: Chris Hedges reports for ‘On Contact’ from resistance at Standing Rock, North Dakota

Environmental activists and Native Americans from 200 tribes are waging a determined last-ditch effort to stop the construction of the Dakota Access Pipeline. Chris Hedges, host of RT America’s ‘On Contact’, visited the water protectors’ resistance camp. 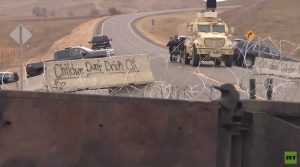 Thousands of protesters have camped out near Cannon Ball, North Dakota, facing off against police, private security contractors and the U.S. Army Corps of Engineers. The company behind the Dakota Access Pipeline (DAPL) intends to run the pipes under Lake Oahe, an artificial lake created by the Army on the Missouri River. The lake is the Standing Rock Sioux Nation’s sole source of drinking water.

“Go back to when we were put on reservations,” Kandi Mossett, an activist with the Indigenous Environmental Network, told Hedges. “The Standing Rock tribe never ceded this land.”

Among the many Native American banners, several upside-down U.S. flags fly over the encampment. Mossett explained they symbolized the Natives’ distress.

“We have been in distress out here ever since we’ve been attacked by the police and the military for simply saying, ‘No, we do not want a pipeline underneath our drinking water source,’ and on our unceded treaty territory,” she said.

The North Dakota native has been fighting hydraulic fracturing, or fracking, work since 2008, when drilling began at the Bakken shale fields which lie under North Dakota and the neighbouring Canadian province of Saskatchewan. The oil boom brought thousands of workers to the state, disrupting local communities. Women and children no longer feel safe because of the oil workers who live in “man camps,” Mossett said.

The land has suffered, too. There was an oil spill of over a million gallons in July 2014, contaminating the upper flow of the Missouri. “Nothing is growing there, whatever that water touched,” Mossett says. 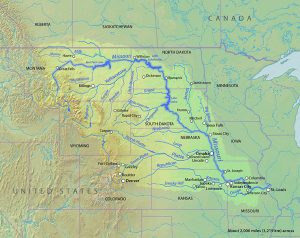 The Standing Rock Nation and its allies worry that when Dakota Access ruptures – not if, but when – it will affect not just the waters of Lake Oahe, but up to 80 million Americans living downstream.

The $3.8 billion pipeline, which is being constructed by Energy Transfer Partners, would transport 470,000 barrels of crude oil from the Bakken fields through three other states to a refinery in Illinois.

“It seems like what they want to do is just get the pipe in the ground and deal with whatever later,” Mossett said.

Native Americans and environmental activists have been buildinga  broad alliance against Dakota Access, seeking to replicate the success of the fight against the TransCanada Keystone XL, another pipeline endangering Indigenous reservations.

Racism is a “powerful instrument that is being used to divide people,” Tom Goldtooth of the Indigenous Environmental Network told Hedges. To counter this, the activists built a “Cowboy-Indian alliance” against Keystone, partnering with the farmers and ranchers in Nebraska.

The struggle in North Dakota has become “a model of resistance that will be replicated throughout the U.S., especially under a Trump presidency, against the hegemonic power of corporations and a democratic system that has become too anemic to carry out reforms – especially environmental reforms – that will protect the planet,” said Hedges.

“This is the last battle in the struggle against colonization – not only of people, but of the Earth. It is a battle indigenous communities have been fighting for over four centuries,” Hedges added. “If they lose, we all lose. If they win, we make possible life itself.”

Watch the episode of ‘On Contact’ with Chris Hedges in North Dakota here, or click on the screen here:

Arrests of journalists at Standing Rock test the boundaries of the First Amendment, by Alleen Brown, The Intercept, Nov 29 2016