Kyiv’s moves against Transnistria are anti-Ukrainian

Not content to merely blockade and shell its citizens in Donbas, post-Maidan Ukraine is now also looking to squeeze ethnic Ukrainians in Transnistria 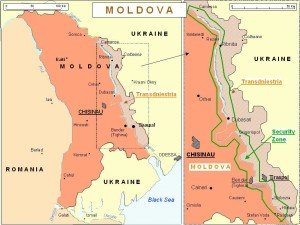 Transnistria (or Pridnestrovie – “land along the Dniester”) is the spiritual predecessor of Novorossiya. It is a small, de facto independent, state taking up a strip of land along the left bank of the mighty Dniester river. The territory in question is internationally recognized as being part of Moldova but has a Slavic majority.

Transnistrian independence is a result of a joint Russian-Ukrainian uprising in the 1990s. As the Soviet Union dissolved, the Slavic left-bank of the former Moldavian SSR sought independence, especially since Moldova was being shaken by a movement that sought the unification of this Romanian-speaking country with Romania.

For Slavs on Dniester’s left-bank, this would have meant leading the existence of a tiny minority among 25 million Romanian speakers, and furthermore would have meant returning under the rule of their former occupiers. During WWII, Romania occupied a chunk of southern Ukraine and was not well-remembered among the Slav populace. As one would expect, they were not too thrilled about the prospect.

Indeed, Pridnestrovie’s inclusion into Moldovan SSR was highly artificial in the first place. In the interwar period, the Soviet Union lay claim to the historic region of Bessarabia on the right bank of the Dniester which had been part of the Russian Empire but was inhabited by a Romanin majority. It was at that time part of Romania.

To enhance its claim, the Soviets dreamt up a “Moldavian Autonomous Soviet Socialist Republic” out of southern Ukraine along the border with Romania on the Dniester and maintained that this “Moldavia” properly extends to cover the entire Romanian region of Bessarabia.

In 1940 under Stalin, the Soviets fulfilled their ambition and after seizing Bessarabia formed a highly dubious “Moldavian Soviet Socialist Republic” out of this majority ethnic Romanian territory and the Ukrainian left-bank Dniester. Essentially, exactly in the same way that inclusion of Romanina-majority Bessarabia into the (Slav-majority) Soviet Union was artificial and forced, so was the inclusion of Slav-majority left-bank Dniester into the Moldavian SSSR.

What is particularly interesting is that volunteers included both Russian and Ukrainian nationalists. Among the Ukrainian volunteers, one could find members of the ultra nationalist UNA-UNSO. It is the oldest and the largest of the groups which today forms the Ukrainian Right Sector coalition.

In other words, back in 1992 Ukrainians as well as extreme anti-Russian nationalists were convinced Transnistria deserved to be helped and that it was wrong to demand of ethnic Ukrainians there to submit to rule from the other side of the Dniester (or even from Bucharest in Romania), which they experienced as alien.

(The decisive role in the conflict was not played by such volunteers but by the remnants of the Soviet Army in the region which put itself between the warring sides and deterred attempts of the stronger Moldavian/Romanian side to resolve the matter by force. Russian peacekeepers in the region today are a continuation of this force.)

In the meantime, much has changed. Today Transnistrians complain (1,2,3) that Ukraine is working with Moldovans to exert pressure against them and get them to submit to Moldova. This pressure consists of a military build up along the Ukrainian-Transnistrian border and a blockade against Russian peacekeepers in Transnistria, making it hard for Transnistrians with Russian passports to travel and making it difficult for Transnistria to export goods except through Moldovan customs.

Kiev has justified these moves by essentially painting Transnistria as Putin’s military colony. This is highly dubious, since Transnistria is very much a geostrategic liability. It is tiny (population of 0.5 million), landlocked, borders only Moldova and Ukraine and covers a thin strip of land. It is therefore highly vulnerable. It may have some value as leverage in relation to Moldova, but it is the case that Moldova itself is a small (population of 3 million), impoverished and landlocked country of little to no strategic significance itself. The reality is that Moscow sees its presence in Transnistria as a moral and possibly political, but not military, asset.

The real reason why Kiev feels the need to denounce Transnistria is because the enclave is in so many ways the antithesis of post-Maidan Ukraine. Culturally and politically it is far closer to Crimea and Donbass than what Ukraine is moving towards.

For one thing, Transnistria continues to uphold the Soviet-era symbols that are now banned in Ukraine. Its flag actually features a hammer and sickle.

Secondly, unlike officially monolingual Ukraine, Transnistria grants official status to Romanian, Ukrainian and Russian at the same time. Even so, its Ukrainians, who are largely Russian-speaking, are content to mainly use Russian and in no mood to take up linguistic de-Russification.

Finally, Transnistria’s orientation is solidly pro-Russian. In part because unlike official Ukraine, official Russia has at times demonstrated concern for the region. If anything Pridnestrovie’s ethnic Ukrainians are even more pro-Russian than ethnic Russians.

In 2009, western scholars funded by the United States’ National Science Foundation organized a survey of public opinion highlighted by the Washington Post which found that Transnistria’s ethnic Moldovans, Russians and Ukrainians all solidly regretted the dissolution of the Soviet Union, approved of Russia’s leadership and supported Transnistria’s independence as a second choice to integration into the Russian Federation. Ukrainians were the most solidly pro-Russian of the lot: 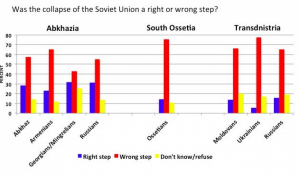 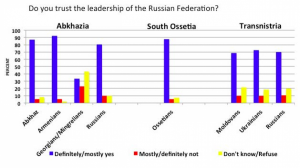 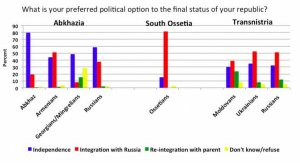