Enclosed are four news reports on the escalating military tensions in eastern Ukraine. The tensions are caused by ongoing shellings by the Ukrainian armed forces and extremist battalions as well as their movement of heavy weaponry to front lines of the conflict. 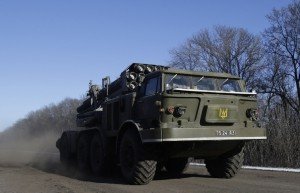 The military tensions are accompanied by ongoing maneuvres by the Kyiv government to give an appearance it is in compliance with the Minsk-2 ceasefire accord signed on Feb. 12, 2015. A centrepiece of the maneuvering is the declared aim of Ukrainian President Petro Poroshenko to pass a law through the Rada (Parliament) to hold “elections” in eastern Ukraine.

TASS reported last week that Poroshenko wants to place such a proposal before the Rada later this month. Analysis of this effort was published on New Cold War.org last month. As we reported, the proposal for an “election” is being made over the heads of the elected representatives of the Donetsk and Lugansk people’s republics, as if they did not exist. Indeed, Ukraine does not recognize the people’s republics. It has imposed an economic embargo against them and it shells the civilians there routinely (see news reports below). All this is in violation of the Minsk-2 agreement itself, including clause 11 which reads (emphasis added):

MOSCOW–Ukraine’s armed forces have begun clearing minefields from their positions towards the front lines in Donetsk to provide smooth movement during an attack on the Donetsk People’s Republic (DPR), the republic’s defence ministry said on Sunday.

“From the Golmovsky settlement (controlled by Kiev) towards the front line we see then demine fields in preparations for an attack,” the Donetsk News Agency quoted the ministry’s representative Eduard Basurin.

The ministry reported during the night to Sunday that the Ukrainian military continues deploying  heavy weapons and troops or a future attack. “In Konstantinovka, up to 40 pieces of weapons have arrived, including SPG (self-propelled gun),” the representative said.

A peace deal struck on February 12 in Minsk, Belarus, by the leaders of Russia, Ukraine, Germany and France envisaged a ceasefire between Ukrainian forces and people’s militias starting from February 15, followed by withdrawal of heavy weapons from the line of military engagement and prisoner release.

The final document says that the Ukrainian troops are to be pulled back away from the current line of engagement and the militias of the Donetsk and Luhansk regions, from the engagement line set by the Minsk Memorandum of September 19, 2014.

On August 22, DPR’s envoy to ongoing peace talks, Denis Pushilin, said because of the continuing shelling of the front line, the republic has made a decision to evacuate civilians.

According to the United Nations Office for the Coordination of Humanitarian Affairs (OCHA), the violence in Ukraine has killed 6,500 people in the past year, wounded 16,000 and left 5 million people in need of humanitarian aid. With more than 1.3 million registered IDPs, Ukraine has now the ninth largest number of internally displaced in the world, according to the Internal Displacement Monitoring Centre.

A Ukrainian army engineering officer made sensational revelations last week that in 2014, he was ordered to stockpile anti-personnel mines in eastern Ukraine. Vadim Yatsulyak was a commander of the corp of engineers of the National Guard of Ukraine. He refused to accept the order and wrote repeatedly to the highest levels of Ukraine’s armed forces to reverse the order but received no replies. Eventually, he fled Ukraine to Russia.

Ukraine and many of the NATO countries which are backing Ukraine’s war in the east of the country are signators to the  international treaty banning the use of land mines. The treaty became part of international law in 1999. The United States has refused to sign the treaty.

Ukrainian troops have shelled the Kirovsky and Petrovsky districts in Donetsk, the city administration said on Monday.

“Around 11pm [local time], as a result of direct hits in the settlement of Staromikhaylovka in the Kirovsky district, damages were registered in four houses and one outbuilding,” Donetsk News Agency quoted the administration as saying.

According to preliminary reports, no one was wounded in shellings. Information about the extent of inflicted damage is being verified.

Twenty-three civilians were killed in shellings by Ukrainian troops from August 15 to 21 and 32 more people were injured, the office of the human rights ombudsperson of the Donetsk People’s Republic (DPR) said on Monday.

“Between August 15-21, as a result of military actions, 23 people died, among them four women and 19 men. Thirty-two people were hospitalized with injuries of varying severity, among them 24 men and eight women,” Donetsk News Agency quoted the office as saying.

The human rights ombudsperson stressed that among the places subjected to most massive shellings are the town of Gorlovka, settlements of the Telmanovsky region, as well as Donetsk’s Kuybyshevsky, Petrovsky and Kirovsky districts.

From August 10 to 16, 17 people were killed in shellings by Ukrainian neo-Nazi fighters and 45 more were injured, DPR defense ministry spokesman Eduard Basurin said.

Earlier in August, the DPR office of human rights ombudsperson said that almost 1,300 people have been killed in shellings by Ukraine forces in DPR since the beginning of 2015.

MOSCOW–Kiev continues to purposefully amass heavy weapons at the line of contact in eastern Ukraine which will lead to the resumption of hostilities in southeastern Ukraine, the Russian Foreign Ministry said.

The ministry noted that the Russian side at the Joint Center for Coordination and Control had informed the employees of the Special Monitoring Mission of the Organization for Security and Cooperation in Europe (OSCE) “about the build-up of pieces with caliber over 100 mm at the line of demarcation” .

In addition to that, five Gvozdika self-propelled howitzers have been deployed to Orlovskoye and two tanks discovered in Granitnoye, the Russian Foreign Ministry said.

“This information has been confirmed by the data obtained from an unmanned aerial vehicle (UAV) of the OSCE Special Monitoring Mission,” the ministry added. “It is noted that on August 15, flying over Aslanovo, the mission’s UAV was subjected to radio interference from the Ukrainian military.”

At the same time, the Russian side at the Joint Center for Coordination and Control informed representatives of the Special Monitoring Mission that, “according to the information of the Donetsk People’s Republic intelligence service, the Ukrainian army was deploying main attack forces with heavy weaponry to the contact line and suggested verifying this information.”

“The Ukrainian authorities thus continue to purposefully build up heavy weaponry at the contact line in violation of the agreements reached in Minsk, which will lead to the resumption of hostilities in southeastern Ukraine,” the ministry noted.

The Information and Press Department of the Russian Foreign Ministry also told TASS the Ukrainian military has substantially increased the number of artillery bombardments of the  Donetsk and Luhansk republics (DPR, LPR) over the past week with the use of all types of weapons despite the ceasefire. “As a result of these artillery bombardments, civilians continue to die and sustain injuries of varying severity, residential houses and social infrastructure facilities are destroyed.”

The heaviest fire fell on districts of Donetsk, the Donetsk airport and the towns of Gorlovka and Debaltsevo, shelled overnight since August 16 by 122-mm and 152-mm artillery systems from the Peski settlement controlled by the Ukrainian Armed Forces. The artillery bombardments have left a man and two women dead, whose identities are being established.

“The relevant information, including photos and video footage on these violations have been handed over by representatives of the Russian Armed Forces at the Joint Center for Coordination and Control to the Special Monitoring Mission of the Organization for Security and Cooperation in Europe (OSCE). They also provided information on Russia’s activities to render assistance in the implementation of humanitarian projects in southeastern Ukraine,” the Russian Foreign Ministry said.