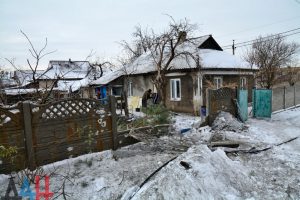 “The enemy continues to provoke us on the Mariupol axis, too. In the first inept attack, in Kominternovo village area, which began at 10:00 a.m., the enemy lost one infantry fighting vehicle and ten servicemen killed,” Basurin said.

As they retreated to initial positions, Ukrainian forces left their fatalities and wounded in the battlefield. However, that did not stop Kyiv. A second attempt to break through DPR defences was made which failed as well.

“At 2:30 p.m. Ukrainian gunmen unsuccessfully attempted to carry out reconnaissance in force, attacking our positions in Kominternovo area with up to one platoon supported by two infantry fighting vehicles. As they were flanking our positions, they began tripping mines. DPR militia returned dense fire, which left seven Ukrainian servicemen killed and more than ten wounded,” Basurin said.

Earlier reports said two DPR militiamen were killed and six others were wounded by Ukrainian forces shelling on Tuesday.

DONETSK – The chairmen of the Donetsk and Lugnansk People’s Councils [legislatures], Denis Pushilin and Vladimir Degtyarenko, respectively, have appealed to the Russian, U.S. and German leaders in a joint statement on Tuesday.

“We ask you to stop Ukraine and compel Poroshenko to cease criminal actions against Donbass people. Make Poroshenko stop shooting at civilians and lift the economic blockade. It must be done before it is too late. Prevent great trouble before an environmental and humanitarian disaster occurs in our land,” reads the statement received by Donetsk News Agency.

The statement noted that the Ukrainian military has targeted industrial facilities and infrastructure, thus creating the danger of environmental and humanitarian disaster both in Donbass and adjacent Ukrainian regions.

The Donetsk People’s Republic and Lugansk People’s Republic made arrangements starting Tuesday to gather more evidence of Ukraine’s actions aimed at worsening the humanitarian crisis. Simultaneously, signatures are being collected in support of the DPR and LPR parliament speakers’ appeal to world leaders.