KYIV BLOG: Did Ukraine provoke the clash in the Sea of Azov? 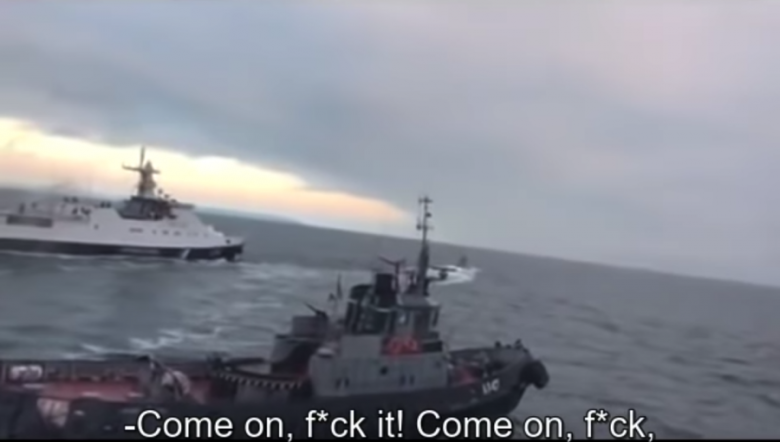 A useful mainstream take on the Kerch Strait incident.

I’m going to get into trouble asking this question. The problem is that the whole situation in the conflict between Russia and Ukraine has become so emotional and polarised that even suggesting Russia is not entirely to blame for the flaring military tensions in the Sea of Azov over the weekend brings down condemnation from Ukraine’s supporters – which include most of the western world.

But there is a question that has to be asked: if Russia is to blame then why would Russian President Vladimir Putin give such an obvious political gift to Ukraine’s President Petro Poroshenko when he is so obviously in such deep political trouble?

With presidential elections now only four months away, Poroshenko is trailing badly in the polls at least 10 percentage points behind his nemesis opposition leader, former prime minister and head of Batkivshchyna (Fatherland) party Yulia Tymoshenko, and unlikely to make it to the second round after the poll on March 31, 2019, let alone win. Ukraine watchers admit that he has failed to deal with corruption, failed to solve any of the journalist murder cases, failed to jail anyone responsible for the deaths during the Euromaidan protests and in general failed to deliver on the promise of the Revolution of Dignity. Ukraine is now the poorest country in Europe and recent polls say 85% of the population believe the country is going in the wrong direction.

A sharp military showdown with Russia, a strongman image of decisive action in the face of an external enemy, the imposition of martial law (and the potential ability to cancel the elections at will) and the opportunity to wear his military uniform in public often is exactly what Poroshenko needs to rescue his campaign. Indeed, these were exactly the tactics Putin used to bolster his flagging support in 2014 when Russia annexed the Crimea, and later led to a sweeping victory with a record margin in the Russian presidential elections in March. If Ukraine didn’t provoke this clash then Poroshenko has just had an extraordinary piece of political luck – and for this reason alone the question must be asked.

Before I go on let me make it clear that Russia is clearly the aggressor in Ukraine, that its proxy forces are fighting an illegal war in Donbas, that the annexation of Crimea in 2014 was just that and the Kremlin is working to undermine the legitimate government in Kyiv. None of this is in dispute.

On top of that the authority the Russian coastguard had to stop, ram and board Ukraine’s three ships that tried to traverse the Kerch Straits on November 25 is at best questionable. The decision to park a container ship under the new Kerch bridge amounts to a blockage of Ukraine’s strategically important ports in the Sea of Azov and that is an act of war.

But none of this means Poroshenko is above manipulating the conflict for his personal political benefit. He remains after all a highly successful Ukrainian oligarch that became rich in one of the most corrupt countries in Europe and was a member of the kleptocratic former president Viktor Yanukovych’s administration.

The Sea of Azov is not international waters (it’s too small to have a patch of shared water in the middle beyond the territorial waters that stretch 20km from a country’s beaches) and there is an international border between Russia and Ukraine that runs down the middle.

As the two countries have to co-exist in the sea, Ukraine has guaranteed right of passage through the sea to its ports in its territorial water in the northwest corner of the sea under an agreement signed with Russia in 2003.

The 2003 agreement is the key here. The Kerch straits are actually difficult to navigate, full of shallows and rocks. The protocols of the agreement require ships to check in with the Russian port authorities at Kerch and take on a pilot to help them navigate the straits. As a result there are regularly traffic jams of ships queuing up in the waters on either side of the straits waiting to be allowed to pass.

This is the second time Ukraine has sent military ships through the straits this year, according to reports. Some frigates passed the straits in September with no problems.

What went wrong this time, the Russian side claim, is that unlike in September the three ships at the weekend – two patrol boats and a tug – didn’t hail Kerch port for permission and didn’t respond to hails from the Russian coastguard when they approached Russian territorial water (on the Russian mainland side of the straits, rather than the disputed territorial waters on the Crimean side of the straits). The Ukrainian ships continued to sail on a course that would have taken them through the straits without permission from the Kerch coast guard.

The Russians claim that the Ukrainian ships entered Russia’s undisputed territorial waters on the eastern side of the straits and that is where the ramming incident took place. This point is now confused as there are multiple conflicting reports, some claiming the incident happened in international waters and others that it happened in Russia’s waters, but the navigation records can clear this up; because the passage is dangerous, ship locations are carefully tracked.

While the right of passage for Ukrainian shipping is guaranteed it is not automatic. Under the 2003 agreement the Russians supervise the passages and Ukraine is obliged to comply with the protocols, according to bne IntelliNews sources. This is to avoid ships without pilots running aground or collisions between shipping passing in and out of the Sea of Azov. No ships are allowed to simply steam through the straits on their own.

“[Russian Prime Minister Dmitry] Medvedev is panicking,” one operator said on the audio, adding, “We should assault them. We have to destroy them,” and “It seems that the president is in control of all of that shit.”

The operators also discuss the arrival of 10 men with “incredible physical skills” within the hour, which corresponds to the arrival of Russian Special Operations, or Spetsnaz, troops who boarded and seized the Ukrainian ships.

However, none of this is inconsistent with stopping the Ukrainian ships if they were deemed by the Russian authorities to be trying to pass through the straits without sticking to the safe passage protocols – what the Russians have referred to as “dangerous manoeuvres.” If it was designed as a Ukrainian provocation it would be expected for the Kremlin to panic and for both the president and prime minister to become involved. Indeed, if it was a planned act of aggression by the Russian side there would be no panic in the Kremlin.

The Ukrainian side claim the opposite and flatly contradict the Russian version of the story. In the statementaccompanying the audio file the Ukrainians claimed that the Ukrainian vessels did hail the Kerch authorities and did ask permission to pass through the straits.

“At 03.58 in order to comply with international shipping security standards Ukrainian Navy small armoured artillery boat “Berdyansk” contacted the coast post of Russian FSB AF, maritime traffic control KERCH and KAVKAZ and informed them about an intention to pass the Kerch Strait. Information was received, but no response was provided. Nevertheless, on 04.07 negotiations of the port Kerch “BEREG-23” operator with the Russian Black Sea Fleet corvette “Suzdalets” regarding the detection of ships of the Naval Forces of the Armed Forces of Ukraine were recorded,” the statement said.

While the video footage clearly show the Russian frigate ramming the Ukrainian tug, this throws no light on the crucial issue of if the Ukrainian ships followed the protocols to pass though the straits. Ukraine has produced audio of the Russian operators talking but pointedly has not provided audio of their own ships asking for permission to pass through the straits. What evidence there is from the audio tape is inconclusive.

More damming is the Russian decision to close access to the straits by parking a tanker under the bridge and effectively closing the straits to traffic. According to the Ukrainian navy statement this ship had turned off its Automatic Identification System (AIS) transponder that identifies it to other shipping, which is a breach of maritime law and opens Russia up to accusations of blockading the straits. (The tanker was removed by the end of the day, else this would be a clear act of war.)

The question of who started this fight remains open without conclusive evidence on either side. But the political timing of the Sea of Azov incident makes it highly suspicious and warrants careful review.

The main problem is that Putin, who is widely credited with being a “master tactician” (even if he is also thought to be a poor strategist) seems to have lost the plot with the Sea of Azov and handed Poroshenko a political gift that amounts to his best chance for getting re-elected.

The animosity between Putin and Poroshenko is palpable when they meet in person. And the Kremlin’s best interests are clearly served by seeing Poroshenko lose the election to Tymoshenko, who is at the end of the day, a deal maker.

As the former a prime minister, Tymoshenko had a fraught relationship with the International Monetary Fund (IMF). She was caught red handed cooking Ukraine’s national accounts to pretend the budget deficit was IMF compliant when in fact she was spending freely to bolster her popular support, as bne IntelliNews reported at the time. She famously granted the return of Soviet-era deposits with Oschadbank, the former Soviet-era savings bank, that were lost during the hyperinflation of the start of the 90s while prime minister, which cost the state billions of dollars, amongst other moves.

Moreover, she is currently campaigning on what is in effect an anti-IMF platform, calling the IMF’s demand to hike domestic gas tariffs — a demand the Poroshenko government has conceded to — “economic genocide” on October 23 and promising to prosecute Poroshenko’s administration if she wins the election.

If Tymoshenko wins then it is quite possible the new $3.9bn Stand By Agreement (SBA) agreed with the IMF in October will stall again. In that case Tymoshenko will need money – lots of it. Ukraine has $6bn of public debt to refinance in 2019 and even more in 2020 when the debt restructuring deal cut by former finance minister Natalie Jaresko expires. Without a functioning IMF deal the public markets will be closed to Ukraine or exorbitantly expensive. Ukraine paid through the nose for a $725mn short-term Eurobond Ukraine placed over the summer as a bridge loan while the current IMF deal was up in the air. That bond was immediately refinanced after a $2bn bond was issued in September days after the new IMF deal was announced.

All this combines to suggest that Tymoshenko might be willing to cut some sort of deal with the Kremlin in exchange for some sort of cash – improved export access to Russia for example. Certainly the Kremlin would prefer to see anyone in charge of Ukraine other than Poroshenko, so why would Russia gift him a tailor-made military crisis?