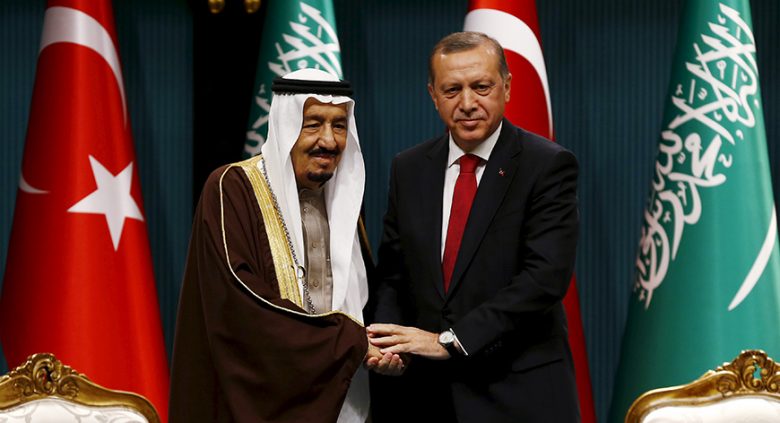 With Ankara ramping up the rhetoric in the aftermath of Khashoggi’s death on a daily basis, this article examines the historic reasons for the increasingly bitter religious divide between Turkey and Saudi Arabia.

The journalist’s suspected murder, and its aftermath, was the latest battle of a 300-year war over Sunni Islam.

The apparent abduction, and probable murder, of the prominent Saudi journalist Jamal Khashoggi at the Saudi consulate in Istanbul on Oct. 2 unmasked the ugly despotism behind the reformist image of the kingdom’s crown prince, Mohammed bin Salman. Less noticed, however, is the way this scandal revealed a long-running rivalry between the two countries that directly butted heads at the outset: Turkey and Saudi Arabia.

The foundation of the rift lies in the countries’ distinct versions of Sunni Islam—versions that have evolved within very different historical trajectories and that have produced contrasting visions about the contemporary Middle East. If the present crisis forces the non-Muslim world to choose sides between these religious models, the decision should be easy.

If the present crisis forces the non-Muslim world to choose sides between these religious models, the decision should be easy.

Both are flawed, but based on their past actions and ideas for the future, only one of them deserves international support.

This is a story that goes back to the 18th century. Then, much of what we call “the Middle East” today, including the more habitable part of the Arabian Peninsula, was part of the Ottoman Empire, ruled from Istanbul, then called Constantinople, by a cosmopolitan elite of mainly Turks and Balkan Muslims, including Bosnians and Albanians. The Hejaz, the western region of the Arabian Peninsula that included the holy cities of Mecca and Medina, was revered for religious reasons, but it was a backwater with no political or cultural significance.

In the 1740s, in the most isolated central area of the Arabian Peninsula, called Najd, a scholar named Muhammad ibn Abd al-Wahhab emerged with a fiery call for the restoration of “true Islam.” He had revived Hanbalism, the most dogmatic of the four main Sunni schools, with a passion to renounce and attack “apostate” Muslims, which included Shiites but also fellow Sunnis such as Ottomans. The latter was guilty of various “innovations” in religion—a term that amounts to “heresy” in Christianity—such as Sufi mysticism and venerations of shrines.

Wahhab soon allied with a chieftain called Ibn Saud—the founder of the Saudi dynasty. The First Saudi State they established together grew in size and ambition, leading to a big massacre of Shiites in Karbala in 1801 and the occupation of Mecca in 1803. The Ottomans crushed the Wahhabi revolt in 1812 via their protectorate in Egypt, and Wahhabism retreated to the desert.

Another tumult in Hejaz occurred in 1856 when the Ottomans, thanks to the influence of their British allies, introduced another heretical “innovation”: the banning of slave trade, which was then a lucrative business between the Africa coast and the Arabian city of Jeddah. At the behest of angry slave traders, Grand Sharif Abd al-Muttalib of Mecca declared that Turks had become infidels and their blood was licit. As we learn from the chronicles of Ottoman statesman Ahmed Cevdet Pasha, Turks’ sins included “allowing women to uncover their bodies, to stay separate from their fathers or husbands, and to have the right to divorce.”

These were the changes introduced during the Tanzimat, the great Ottoman reform movement in the mid-19th century by which the empire imported many Western institutions and norms. The Tanzimat allowed the Ottoman Empire to ultimately become a constitutional monarchy with an elected parliament—something still unimaginable in the absolute monarchy of Saudi Arabia

It also allowed the rise of the modern Turkish Republic, where secular law became the norm, women gained equal rights, and democracy began to grow.

Today, admittedly, we are at a very grim point in Turkish democracy, as a religious reaction to the excesses of French-style secularism has been captured by President Recep Tayyip Erdogan to bolster a fiercely authoritarian populism. The “Turkish model” that Erdogan’s party seemed to represent at the outset of this century was an inspiration to many Muslims, including myself, as a synthesis of Islam with liberal democracy. In the past five years, however, this model has collapsed dramatically, as Turkey became the home of jailed journalists, crushed opponents, hate, paranoia, and a new cult of personality that I have called “Erdoganism.”

Yet Erdogan and his fellow Islamists are still Turkey’s Islamists—that is, compared with Saudi Arabia’s elites, they are still operating within a more modern framework that reflects a milder interpretation of Sunni Islam. And this sheds light on the two major political disputes that have emerged between Ankara and Riyadh.

The first of these concerns Iran. The Saudis are the champions of a united Sunni front against Iran, which is not free from the hatred of the rawafid, a derogatory term for Shiites, that is deeply embedded in Wahhabism.

The Saudis are the champions of a united Sunni front against Iran, which is not free from the hatred of the rawafid, a derogatory term for Shiites, that is deeply embedded in Wahhabism.

And while this militancy may sound like music to hawks in Washington and Israel, who are eager to ostracize Iran for their own reasons, it only escalates the poisonous sectarianism in the region, whose main example is the disastrous civil war in Yemen.

In contrast, despite being at odds with Iran for years over the Syrian civil war, Turkey has not condemned Iran as an enemy, let alone fueled any anti-Shiite view. “My religion is not that of Sunnis, of Shiites,” Erdogan has repeatedly said. “My religion is Islam.” This is the right approach in a region that needs not more but less sectarianism. Erdogan believes that the best way to tame Iran’s destabilizing influence is through diplomacy, of the sort former U.S. President Barack Obama tried, rather than threats and aggression.

It’s important to properly understand the contours of the dispute. The Muslim Brotherhood, a political party whose ultimate aim is to introduce sharia, or Islamic law, can be a legitimate concern for secular Arabs. Saudi Arabia, however, already implements the most rigid form of sharia

The Muslim Brotherhood, a political party whose ultimate aim is to introduce sharia, or Islamic law, can be a legitimate concern for secular Arabs. Saudi Arabia, however, already implements the most rigid form of shariaand also promotes the Salafi movements around the region, which are more regressive than the Muslim Brotherhood on issues like women’s rights.

The real concern of Saudi Arabia with Muslim Brotherhood is political—that a popular Islamist movement that doesn’t recognize the absolute authority of the ruler is subversive. So, they should be crushed by force—an argument that again makes sense to hawks in the West, for their own reasons. History shows, however, that the very thing that created terrorist offshoots of the Muslim Brotherhood has been its violent repression by Arab tyrants. As experts such as Shadi Hamid argue, “normalizing Islamist parties” is in fact the only way to build Arab democracies.

The Turkish Islamists who now rally behind Erdogan, who have long been accustomed to electoral democracy, are correct in making the same argument. Yet they also need to see that democracy hardly means anything if it means the tyranny of the majority, which seems to be their current approach in Turkey. To make progress in Turkey, they should emulate the much brighter model of Tunisia, where Islamists and secularists have been able to forge a liberal constitution together.

The appropriate reform model for Saudi Arabia, meanwhile, would come from the reasonable constitutional monarchies of the region, such as Jordan and Morocco, which are freer than most other Arab states. Saudi Crown Prince Mohammed bin Salman, who apparently has tried to charm the West with his popular reforms such as allowing women to drive cars, must understand that modernity is not just about cosmetic social changes, but also about some measure of political freedom. That means not unabashedly killing your critics.

Mustafa Akyol is a senior fellow at the Cato Institute, where he focuses on the intersection of public policy, Islam, and modernity.
Editors’ Note: While we don’t necessarily share the views we publish on New Cold War, we do attempt to provide readers with a range of views. This is because your right to make your own mind up depends on your being fully informed.
Share
Tweet
Share
Pin