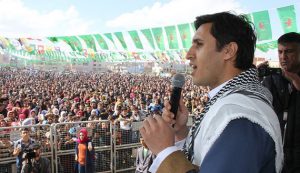 One of Turkey’s most promising young Kurdish politicians was sentenced to eight years and nine months in prison for a questionable terrorism conviction today. A court in the mainly Kurdish southeast region pronounced Kamuran Yuksek, the charismatic co-chair of the Democratic Regions Party (DBP), a member of a terrorist organization. The official was referring to the Kurdistan Workers Party (PKK), the militant group that has been fighting for Kurdish self-rule since 1984.

The DBP’s deputy chairman, Ramazan Tunc, claimed the verdict was reached without amassing sufficient evidence against Yuksek. “No witnesses were even heard. The verdict was rushed; the trial is purely political,” Tunc told Al-Monitor in a telephone interview.

Yuksek, who is facing trial in three other cases, was not present at the hearing. Party officials said the 37-year-old was in Europe and may not return to Turkey to avoid joining thousands of fellow Kurdish politicians who are behind bars on similar charges. At least 3,850 of them are DBP members, including 85 elected mayors and his co-chair Sebahat Tuncel. Thousands of other detainees belong to the DBP’s sister party, the Peoples’ Democratic Party (HDP).

HDP’s co-chairs Selahattin Demirtas and Figen Yuksedag are in prison together with 11 fellow HDP members of parliament. In a related development, prosecutors convicted and handed down sentences totaling 1109 years for 121 Kurdish politicians, lawyers and other activists today. Yuksek was among a majority who received 21 years in a long running case claiming the defendants were seeking to establish an independent Kurdish state under the guidance of the PKK.

With that sentencing, the decapitation of the Kurdish leadership in Turkey is complete.

In a recent interview, Yuksek protested the absurdity of his case. A prosecutor pointed to his joking references to avocados in wiretapped conversations with Demirtas. The prosecutor opined that the pair was really talking about hand grenades.

Emma Sinclair-Webb, the Turkey program director for Human Rights Watch, called Yuksek’s conviction “the latest episode in a pattern of removing or jailing Kurdish politicians at the national and local levels.” Webb told Al-Monitor, “These are effective organizers who are running a ‘no’ campaign, and they are being prevented from doing so.” Webb was alluding to the April 16 referendum on constitutional amendments that would formalize the vast powers being exercised by President Recep Tayyip Erdogan. Both Kurdish groups are loud opponents of the measures that critics say will result in one-man rule. They have vowed to mobilize their base at the ballot box.

Tunc angrily dismissed persistent rumors that the Kurdish parties were in secret talks with Erdogan to boycott the referendum in exchange for the resumption of peace talks with the PKK. A boycott would tip the balance in favor of the ayes. “Why would we hand rope to our executioners? The claims are disgusting lies,” Tunc fumed.

Hopes that U.S. Secretary of State Rex Tillerson will comment on Turkey’s authoritarian turn evaporated following news that he would not be meeting with any members of the opposition during a March 30 visit to Ankara. The purpose of the trip is to defuse Turkish fury over the U.S. plans to capture Raqqa from the Islamic State with the help of Syrian Kurdish forces with close links to the PKK. Sinclair-Webb said, “You would expect the secretary to show the United States is even-handed in advance of a referendum on the future of the country. It’s extraordinary that he isn’t making time for the opposition on what will be his first visit to Turkey as secretary of state.”

If anything, the government is likely to spin Tillerson’s trip as support for Erdogan.

According to the statement, released on March 29 and titled ‘We don’t accept and we demand’, intellectuals and writers said holding a referendum during a state of emergency while keeping 90 mayors and 13 HDP deputies, including its co-chairs in jail is unjust.

“We, people of this country who voted for the HDP and other parties and who want to live in peace, demand that the government end a lynching campaign against a party [HDP] that sent deputies to the TBMM [Turkish Grand National Assembly] after receiving over six million votes,” the statement said.

Underlining that the HDP is the third largest party in the Turkish Parliament, the statement said the state of emergency that was declared following a failed coup last summer has to be immediately lifted in order to provide a “free, equal, fair and legitimate” referendum atmosphere on April 16 for a constitutional package that will switch Turkey into an executive presidency.