Justice for the victims of the Odessa massacre of May 2, 2014!

On the afternoon of May 2, 2014, riots erupted in the Ukrainian city of Odessa when a crowd of Ukrainian ultra-nationalists led by the ‘Right Sector’ extreme right marched on a peaceful encampment of protestors opposed to the austerity and anti-Russia policies of the Ukrainian government in Kyiv. The attack left at least 46 of the protesters dead. Many were killed after they sought refuge in the House of Trade Unions in the center of the city which was then set on fire by the attackers. 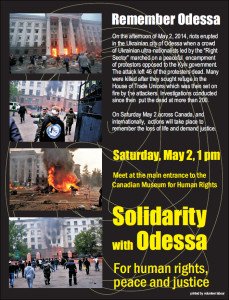 Odessa commemoration in Winnipeg, Canada on May 2, 2015

Independent investigations conducted since then put the dead at more than 200. To date, none of the perpetrators of this attack have been charged and no serious criminal investigation has taken place. Some of those who were attacked by the right-wing extremists have been criminally charged.

On Saturday May 2, in London, England, New York City, across Canada and elsewhere internationally, actions will take place to remember the loss of life in Odessa on May 2, 2014 and demand justice. (Please send information of more events to list here to: editors (at) new coldwar.org.)

Remember Odessa! For human rights, peace and justice! Saturday, May 2, 2014

Winnipeg: Solidarity with Odessa. For human rights, peace and justice. Beginning at 1 pm, at the main entrance to the Canadian Museum of Human Rights.

London: Justice for Odessa! No impunity for fascist killers! 1 pm, at Embassy of Ukraine to the UK, 60 Holland Park, W11 3SJ London
https://ukraineantifascistsolidarity.wordpress.com/2015/04/10/london-may-2-justice-for-odessa/

New York City: Stand with Odessa! Join the contingent at the New York May Day rally & march for worker & immigrant rights. Look for the ‘Remember Odessa’ banner and the Banner of Victory commemorating the Soviet Union’s victory over Nazi Germany 70 years ago.
https://www.facebook.com/events/458786257612929/