Part one: Exposing the truth buried under NATO propaganda 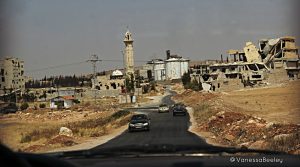 In Part I, Vanessa Beeley lays out the mainstream narrative on Syria, revealing a neoconservative agenda promoted by NATO-funded NGOs. These NGOs paint the destruction of the historic city as being caused by the Syrian government under Bashar Assad, not the violent armed insurgents which receive arms, funding and training from Western governments and their allies.

ALEPPO, Syria — Aleppo has become synonymous with destruction and “Syrian state-generated” violence among those whose perception of the situation in the war-torn nation is contained within the prism of mainstream media narratives.

The NATO-aligned media maintains a tight grip on information coming out of this beleaguered city, ensuring that whatever comes out is tailored to meet State Department requirements and advocacy for regime change. The propaganda mill churns out familiar tales of chemical weapons, siege, starvation and bombs targeting civilians–all of which are attributed to the Syrian government and military, with little variation on this theme…

… Travelling with a fellow independent journalist, Eva Bartlett, a translator and a taxi driver, I entered Aleppo on Aug. 14 via Castello Road, which some mainstream media have taken to calling “Death Road.” To get there, we were given a security clearance which enabled us to travel via roads that, from the western city of Homs onward, snake through areas where various terrorist groups, including Daesh, are never far from the route or where the threat of kidnapping is to be taken into account. Entry into military areas once inside Aleppo could not be approved without SAA protection and accompaniment…

ALEPPO, Syria — From the town of Bani Zaid in northern Aleppo, we made our way to the Aleppo Medical Association in the al-Azizia district of Aleppo. We met with Dr. Zahar Buttal, the director, and Dr. Bassem Hayak, who heads the psychological and malnutrition trauma units which, among their many services, treat civilians who manage to flee terrorist-held eastern Aleppo into the government-held western Aleppo via the humanitarian corridors established by Russian and Syrian authorities…