Canadian journalist Eva Bartlett is speaking to audiences in the United States on her observations in Syria during the past three years, including this year in Aleppo. She spoke to an audience in Santa Cruz, California on December 16, 2016. 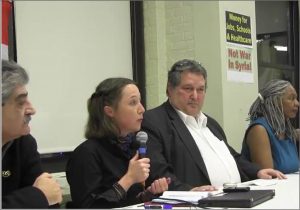 Bartlett has undertaken six reporting visits to Syria since 2014 and has written and reported extensively on her findings.

Her speaking tour in the United States is sponsored by the U.S.-based Hands Off Syria Coalition along with local sponsors.

To watch Eva Bartlett’s 52-minute presentation, click on the weblink above or the screen below.