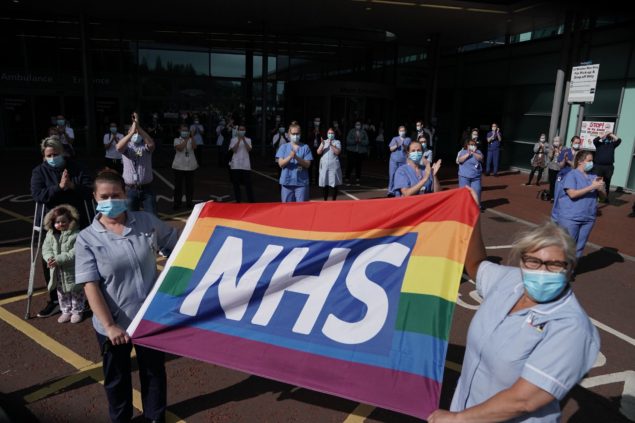 The Conservative government has announced the scrapping of Public Health England (PHE) and its replacement with a new body, the National Institute for Health Protection (NIHP).

NIHP will bring together several organisations, PHE, NHS Test and Trace, and the Joint Biosecurity Centre, as the “first step towards becoming a single organisation.”

A range of opinions from the British media:

The Conservative government has announced the scrapping of Public Health England (PHE) and its replacement with a new body, the National Institute for Health Protection (NIHP).

NIHP will bring together several organisations, PHE, NHS Test and Trace, and the Joint Biosecurity Centre, as the “first step towards becoming a single organisation.”

PHE, established by the Cameron led-Tory government in 2013, is the national public health body and executive agency of the Department of Health and Social Care. Its scrapping seven years later is part of efforts by the Tories to scapegoat PHE for the government’s catastrophic response to the coronavirus pandemic that has cost tens of thousands of lives. But its replacement by NIHP has a broader aim as well, accelerating the privatisation of the National Health Service (NHS).

Health Secretary Matt Hancock announced the new body “will work seamlessly to harness the capabilities of academia and groundbreaking and innovative private companies with whom we must work so closely to get the best result.”

For months, Boris Johnson’s government has been trailing the “failures” of PHE, but these were the direct outcome of government policy. This included its decision to bury a 2016 report exposing the unpreparedness of the NHS for a flu pandemic, the gutting of emergency stockpiles of personal protective equipment (PPE), the downgrading of COVID-19 from a High Consequence Infectious Disease, and the denial of full PPE to frontline health workers.

Throughout the early months of the pandemic, PHE insisted repeatedly that COVID-19 posed a “low risk” to the public. This was in line with the government’s “herd immunity” strategy, which it was forced to temporarily abandon only due to massive public pressure, leading to the March 23 announcement of a national lockdown.

The PHE’s method of calculating COVID-19 deaths, later found to have possibly inflated the figure by just over 5,000 when compared with the method used by other European countries, was seized on by Johnson to press the case for disbandment. Downing Street’s own systematic efforts at minimising the death toll, which involved excluding deaths in care homes during the peak of the pandemic, were swept aside.

The Daily Telegraph has led the attacks on PHE as part of an orchestrated campaign by the right-wing media and think-tanks. Among those demanding PHE’s scrapping were former Telegraph editor Charles Moore and Matthew Lesh, head of research at the Adam Smith Institute. Lesh’s Telegraphheadlines included: “Public Health England can’t meet the challenge it faces from coronavirus” (April 17); “Public health bureaucrats must face a reckoning for their catastrophic coronavirus failures” (May 10); “Public Health England’s exaggerated death statistics are a scandal that has fed fear” (July 17); “PHE has been a public health catastrophe” (August 16).

But the main “crime” of PHE was that it was part of a “bloated” NHS that was still not sufficiently responsive to the expertise and “flexibility” of the private sector. In a Telegraph editorial April 4 headlined, “The inflexibility of our lumbering NHS is why the country has had to shut down,” Moore complained of the “reluctance of the health service, and of Public Health England, to look outside their own spheres for help. In a culture almost proudly hostile to the private sector and mistrustful of independent academic work, the NHS’s first instinct is to defend bureaucratic territory.”

On Sunday, the Telegraph editorialised on the government’s imminent announcement with, “Farewell to Public Health England, and good riddance.” It began, “For weeks this newspaper has called for Public Health England to be abolished, and today we are pleased to report a victory.” Every failure of the Tories, from the country being utterly unprepared for the pandemic to there being no systematic testing of the population, was blamed on PHE. It repeated Lesh’s criticism that PHE had exaggerated the COVID-19 death toll.

Former Tory leader Sir Iain Duncan Smith who had said in June that he would “abolish PHE tomorrow” said, “The one thing consistent about Public Health England is that almost everything it has touched has failed.”

There is no doubt that PHE has presided over a massive failure but the architects of this are Hancock and Johnson.

Over the weekend, PHE Chief Executive Duncan Selbie told the Times, “The UK had no national diagnostic testing capabilities other than in the NHS at the outset of the pandemic. PHE does not do mass diagnostic testing. We operate national reference and research laboratories focused on novel and dangerous pathogens, and it was never at any stage our role to set the national testing strategy for the coronavirus pandemic. This responsibility rested with [the Department of Health and Social Care].” He added, “Any suggestion that PHE monopolised, centralised and controlled pandemic testing and even stopped others from developing tests or conducting them is not true.”

Over the past decade, PHE has been subjected to brutal austerity, its budget slashed by 40 percent in the seven years since its formation. When the pandemic hit Britain there were just 290 contact tracers in PHE for the whole of England, with a population of over 50 million people.

That Dido Harding is Johnson’s choice to lead the NIHP reveals everything about the direction of travel for the dyed-in-the-wool Thatcherites who head government.

Diana Mary “Dido” is Baroness Harding of Winscombe, daughter of Lord Harding, granddaughter of Field Marshal John Harding, 1st Baron Harding of Petherton. It was Harding who in May was selected by Hancock to be put in charge of governments “Track, Test and Trace” system.

Harding has no qualifications to take on such a crucial role, a former CEO of telecommunications company TalkTalk and still a non-executive director on the Court of the Bank of England after being appointed in 2014. In 2017, she became Head of NHS Improvement, a role devoted to the privatisation and break-up of the NHS. Harding later joined the board of the horseracing’s Jockey Club.

While PHE was being denounced for not being able to provide a working track and trace system—by a government that abandoned any systematic COVID-19 testing in March—Harding’s record overseeing track and testing was disastrous. Upon taking control of the Track and Trace system, she outsourced to private firms including Serco and Sitel who made a killing. Serco received £108 million for a 13-week deal. The companies failed to reach almost 40 percent of people in close contact with those who tested positive for COVID-19 in the week to August 5. This month, the contracts were renewed, with Serco set to receive £410 million and Sitel £310 million.

Harding is spearheading the ruling elite’s demands for full-scale privatisation of the NHS. She is married to Tory MP John Penrose, board member of the rabidly Thatcherite 1828 think tank. 1828 describes itself as “a neoliberal opinion website. With the recent resurgence of socialist ideas, 1828 provides a platform for individuals to encourage the alternative: political and economic freedom. We believe that all our lives have been positively changed by the spread of free-market capitalism.”

The group advocated that PHE be abolished and the entire NHS be scrapped in favour of a “social health insurance system”, adding “you don’t need the state to own or subsidise hospitals, or to control policy from the centre; you simply need it to regulate the system to a satisfactory degree.”

Penrose serves as Johnson’s “Anti-Corruption Champion” but the stench of corruption in the appointment of his wife as head of the National Institute for Health Protection is overwhelming.

A decisive move has been made by the government towards flogging the NHS wholesale to private corporations. In July, the Tories voted down an amendment to its Trade Bill aimed at exempting the NHS from any future free trade deals post-Brexit.

Johnson’s widely despised government can only get away with such crimes because it faces no opposition to its agenda from any section of the political establishment. Throughout the pandemic, Labour leader Sir Keir Starmer has repeatedly stressed that his party will “work constructively with the government.”