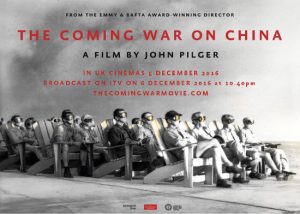 John Pilger’s new documentary film, The Coming War on China, is in cinemas in the UK beginning December 1, starting at the BFI on London’s Southbank. On December 5, Picturehouse cinemas will hold a nationwide with John Pilger. The website is picturehouses.com.

For worldwide distribution enquiries, contact Dartmouth Films: christo@dartmouthfilms.com. The film’s website address is thecomingwarmovie.com. Watch the trailer for the film here or click the screen below.

‘The Coming War on China’, a film by John Pilger, reviewed by John Bleasdale, Cinevue

‘The Coming War on China is an alarming work of some urgency.’
Editors’ Note: While we don’t necessarily share the views we publish on New Cold War, we do attempt to provide readers with a range of views. This is because your right to make your own mind up depends on your being fully informed.
Share
Tweet
Share
Pin