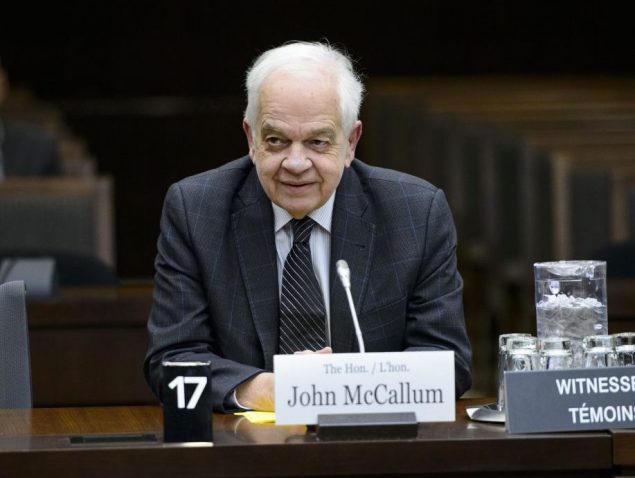 Although McCallum’s words were seen as inappropriate in Canada, they were given a very different reception in China.

Prime Minister Justin Trudeau’s dismissal of John McCallum as Canada’s top envoy to Beijing only throws more gasoline onto the diplomatic bonfire that has raged since the arrest of Huawei executive Meng Wanzhou.

Mr. McCallum’s position was already tenuous after he told Chinese-language journalists that Ms. Meng had “strong arguments that she can make before a judge,” but his dismissal is a setback to our efforts to secure the release of detained Canadians Michael Kovrig and Michael Spavor. For diplomacy to work, our ambassador to China needs to be someone the government trusts; Mr. McCallum was that someone.

And while his words may be seen as inappropriate in Canada, they were given a very different reception in China. The reactionary sentiments on Chinese social media ranged from “cautious optimism of Meng’s release” to “delayed justice” delivered by a top Canadian official. These sentiments likely reflect the attitudes of Chinese President Xi Jinping’s administration; it is telling, given the government’s strict censorship on such platforms, that the authorities allowed these to remain.

While Ottawa may tout Ms. Meng’s arrest as part of Canada’s extradition treaty with the United States as adhering to the rule of law, the Chinese clearly beg to differ. Her arrest was labelled as an act of “U.S. hooliganism” by the Chinese government, and Canada was seen as a lackey to a politically motivated act to contain Huawei, which builds equipment that helps provide vital 5G infrastructure.

The major Chinese multinational has come to symbolize China’s technological prowess, and to Mr. Xi’s government, Ms. Meng epitomizes the innocent Chinese who, by virtue of their ambitions, have suffered simply because the United States feels threatened. By rallying its allies to denounce Huawei’s technology, the United States has inspired the prevailing belief in China – that a concerted scheme by the West seeks to thwart its rise.

China’s stance isn’t without merit, and some quarters of the Trump administration even seem to agree. In an article published just after Mr. McCallum’s resignation, The New York Times reported that anonymous U.S. officials’ implications around Huawei have not been backed by public evidence. And according to “others familiar with the case,” there is “no smoking gun – just a heightened concern about the firm’s rising technological dominance and the new Chinese laws that require Huawei to submit to requests from Beijing.”

This is clearly a case of the long arm of U.S. economic statecraft colliding with China’s hostage diplomacy. Since the end of the Cold War, the United States has been increasingly aggressive in using economic policies to pursue foreign-policy objectives, and U.S. President Donald Trump’s often zero-sum calculus has further aggravated it. China has interpreted the United States’ various provocations and condemnations as the tactics of a bully, akin to kicking the backs of its knees during a marathon.

In return, China believes it is justified in holding Canadians as pawns, if just to showcase its coercive might. Hostage diplomacy is not justifiable under any circumstances, but from China’s perspective, neither the United States nor Canada have the moral high ground. In response to Mr. McCallum’s resignation, the government-owned newspaper China Daily wrote: “It is high time Trudeau reflected upon whether it is worthwhile allowing the U.S. to lead him by the nose.”

Canada is caught between two hegemons refusing to play by the rules. Beijing doesn’t look interested in releasing the two Canadians, and the Trump administration looks disinterested in their fates.

Moral suasion must be the way forward. The world needs to convince China it is not in its interests to detain foreigners at will, and that its multinational firms or global ambassadors are bearing the brunt of the costs. Mr. Xi may be tempted to employ a 19th-century governing style, but in the globalized 21st century – an interconnected world that China itself wants to lead – reputational costs can have serious material repercussions.

For this to work, Canada must rally allies – like Australia and Sweden, who have had their own citizens detained in China – to show, as a coalition, that these kinds of detentions will have costs. Other countries governed by the rule of law have every incentive to join up, too, because their citizens might be the next targets.

In the short term, all eyes are on the legal merits of Ms. Meng’s case. That has been compromised to some extent, as has Ottawa’s political capital in Washington. But this is the greatest foreign policy challenge that the Trudeau government has faced to date – and while firing Mr. McCallum may help pacify some sentiments at home, it will hardly help Canada secure a favourable outcome for its detainees more quickly.