By John Helmer, published on Dances With Bears, Sept 30, 2016 (original title: ‘Four MH17 questions – the answers to which prove the Dutch police, Ukrainian secret service and U.S. government are faking the evidence of the MH17 shootdown’) 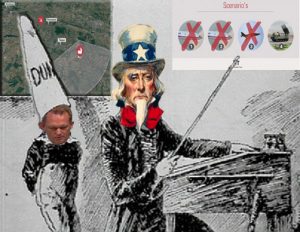 You don’t need to be an expert in ground-to-air warfare, radar, missile ordnance, or forensic criminology to understand the three fundamental requirements for prosecuting people for crimes. The first is proof of intention to do what happened. The second is proof of what could not have happened amounts to proof that it didn’t happen. The third is proof beyond reasonable doubt.

These are not, repeat not, the principles of the Joint Investigation Team (JIT), a team of police, prosecutors, and spies from The Netherlands, Ukraine, Malaysia, Belgium, and Australia. They have committed themselves to proving that a chain of Russian military command intended to shoot down and was criminally responsible for the destruction of Malaysia Airlines Flight MH17 on July 17, 2014, and for the deaths of all 298 people on board. The JIT case for Russian culpability hinges on five elements occurring in sequence – that a BUK missile was launched to the east of the aircraft, and approached it head-on, before exploding on the port (left) side of the cockpit.

Pause, rewind, then reread slowly in order to identify the elements of intention, causation, and culpability: (1) the BUK missile was aimed with a target acquisition radar by operators inside a BUK vehicle at a target flying in the sky and ordered to fire; (2) they fired from their vehicle parked on the ground facing east towards the aircraft’s approach; (3) the missile flew west and upwards to a height of 10,060 metres; (4) the warhead detonated; (5) the blast and the shrapnel tore the cockpit from the main fuselage; destroyed one of the aircraft engines; and caused the aircraft to catch fire, fall to the ground in pieces, and kill everyone.

On Wednesday afternoon, in the small Dutch town of Nieuwegein, two Dutchmen, one a prosecutor, one a policeman, claimed they have proof that this is what happened. For details of the proof they provided the world’s press, read this. Later the same day, in Moscow, a presentation by two Russians from the Almaz-Antei missile group, one a missile ordnance expert, the other a radar expert, presented their proof of what could not have happened. Click to watch.

The enemies of Russia accept the Dutch proof and ignore the Russian proof. As Wilbert Paulissen, the Dutch policeman, claimed during the JIT briefing, “the absence of evidence does not prove [the BUK missile] was not there.”

Question 1. In the old models of the BUK missile system, a separate target…

Read the full article, with extensive photos and graphs, at the original weblink above.