John Bolton, the former U.S. ambassador to the United Nations, has again called for regime change in Iran. The hawkish former diplomat’s worldview is at odds with Donald Trump’s non-interventionist rhetoric.

Introductory note by New Cold War.org: In the following news article, the best evidence presented by the writer in her argument that the U.S. ‘might’ be headed to a less militaristic foreign policy by President-elect Donald Trump is the following: “But to the extent that the president-elect has a worldview, it seems to lean [emphasis added] non-interventionist.” Oh, and the Russian president phoned Donald Trump to with an election congratulations formality. 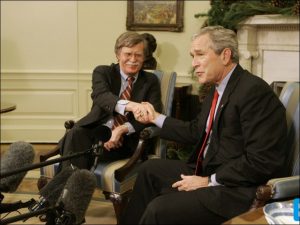 Right-wing ideologue John Bolton served as U.S. ambassador to the UN for 16 months in 2005-06 under President Bush

WASHINGTON ― John Bolton, a top candidate to serve as President-elect Donald Trump’s secretary of state, is publicly calling for the U.S. to help overthrow the existing government in Iran. “The only long-term solution is regime change in Tehran,” the former U.S. ambassador to the United Nations told SiriusXM’s Breitbart News Daily on Thursday morning.

“The ayatollahs are the principal threat to international peace and security in the Middle East.”

The call for regime change is very much in line with past statements from Bolton, a hyper-hawkish Bush administration official who stands by the decision to invade Iraq in 2003. He has repeatedly urged the U.S. to help Israel bomb Iran or do it alone. Even as Iran was in the final stages of negotiating an international agreement that requires it to dramatically scale back its nuclear infrastructure, Bolton recommended a military attack.

Thursday’s remark suggests that he has no plans to tone down his adventurist foreign policy views, which run counter to Trump’s repeated promises to focus resources domestically and to avoid unnecessary entanglements abroad.

The Trump campaign has struggled to outline a cohesive foreign policy vision. But to the extent that the president-elect has a worldview, it seems to lean non-interventionist. He has said he would require U.S. allies to shoulder more of the burden for their own security, even suggesting that some non-nuclear nations could obtain nuclear weapons to defend themselves without help from Washington. He speaks aggressively about “destroying” the Islamic State but hasn’t offered a plan to match his rhetoric. Instead, he’s suggested that he might let Russia, which is backing Syrian President Bashar Assad, take charge of outside efforts to help resolve the civil war in Syria.

One of Trump’s first calls with a foreign leader after the election was with Russian President Vladimir Putin. Russia is allied with Iran in the Syrian conflict, making Bolton’s comments about Iran that much more awkward.

Throughout the presidential campaign, Trump slammed former Secretary of State Hillary Clinton for being too quick to intervene militarily. At every opportunity, he brought up her vote for the Iraq War and her push for NATO airstrikes in Libya ― even though he had backed both operations at the time.

“To me, it’s like saying, ‘Do you prefer a spoon or a knife?” he said. “And the immediate next question is, ‘Well, for what?’ That’s how I view interventionism and non-interventionism. These are the tools in the country’s toolkit and you do what’s appropriate.”

Yet Bolton often prefers the knife of intervention, no matter what the occasion. Much like the proponents of the Iraq War who said the 2003 invasion would be a straightforward undertaking welcomed by the Iraqis, Bolton said Thursday that Iranians want regime change. He also hinted that such regime change could involve the U.S. arming opposition groups.

“I don’t think the regime is popular, but I think it has the guns. I think ― there are ways of supporting the opposition. It does not involve the use of American military force. It does involve helping the opposition to get a different kind of government,” Bolton said.

He did not respond to requests from The Huffington Post for clarification on how regime change in Iran might take place without direct U.S. military intervention.

In the Breitbart interview, Bolton criticized President Barack Obama for not doing more to support the Green Movement protests in Iran in 2009. But he has also supported more extreme opponents to the regime. Bolton has attended rallies in support of Mujahedeen-e-Khalq (MEK), an exiled Iranian dissident group that the U.S. classified as a terrorist organization until 2012.

The obvious disconnect between the worldviews of Trump and Bolton makes it hard to grasp why the president-elect is considering Bolton to be his top diplomat. But lacking any foreign policy experience himself, Trump is easily swayed in this area by the advice of those close to him, multiple sources with knowledge of the transition told The Huffington Post.

Jared Kushner, Trump’s son-in-law and close adviser, likes Bolton, the sources said, in part because of Bolton’s extreme anti-Iran stance and his related unconditional support for Israel. Billionaire Robert Mercer and his daughter Rebekah, Trump’s largest financial backers during the campaign, have been heavy supporters of Bolton as well.

Trump’s transition team did not respond to a request for comment.

While Trump has called the Iran nuclear agreement a “disaster” and the “worst deal ever negotiated,” he hasn’t urged overthrowing the regime of Ayatollah Ali Khamenei as an alternative. At times during the campaign, Trump said he would rip up the nuclear accord, but more frequently, he made vague promises to “renegotiate” the terms of the deal and extract more concessions from Iran. He said he would “enforce it like you’ve never seen a contract enforced before.”

Sen. Bob Corker (R-Tenn.), the chairman of the Foreign Relations Committee ― who has also been floated as a possible secretary of state ― said Wednesday that it’s more likely that Trump will seek to build consensus among U.S. allies that Iran is violating the agreement than move to tear up the deal immediately.

With Breitbart exec in the White House, neo-conservative John Bolton and his establishment agenda already has a foot in the door.

The so-called “alternative right” is at least posing as holding its breath over the prospects of Bush-era neo-conservative John Bolton being appointed as U.S. Secretary of State. However, with the appointment of Breitbart’s Steven Bannon as Chief Strategist and Senior Counselor of the incoming administration of President-elect Donald Trump, Bolton and his neo-conservative agenda already has a solid foot in the door…

WASHINGTON — President-elect Donald J. Trump moved quickly on Friday to begin filling national security posts at the top echelons of his administration, announcing that he had tapped a group of hawks and conservative loyalists who reflect the hard-line views that defined his presidential campaign.

Mr. Trump selected Senator Jeff Sessions of Alabama, who has made cracking down on undocumented immigrants a signature issue, to be his attorney general, while installing Michael T. Flynn, a retired lieutenant general who believes Islamist militancy poses an existential threat, as his national security adviser. And as director of the C.I.A., Mr. Trump selected Representative Mike Pompeo of Kansas, who harshly criticized Hillary Clinton during the House investigation of the 2012 attack on the United States diplomatic compound in Benghazi, Libya…

President-elect Donald J. Trump has offered the post of national security adviser to Lt. Gen. Michael T. Flynn, potentially putting a retired intelligence officer who believes Islamist militancy poses an existential threat in one of the most powerful roles in shaping military and foreign policy, according to a top official on Mr. Trump’s transition team.

General Flynn, 57, a registered Democrat, was Mr. Trump’s main national security adviser during his campaign. If he accepts Mr. Trump’s offer, as expected, he will be a critical gatekeeper for a president with little experience in military or foreign policy issues…