Joe Biden, his son and the case against a Ukrainian oligarch

WASHINGTON — When Vice President Joseph R. Biden Jr. traveled to Kiev , Ukraine, on Sunday for a series of meetings with the country’s leaders, one of the issues on his agenda was to encourage a more aggressive fight against Ukraine’s rampant corruption and stronger efforts to rein in the power of its oligarchs. 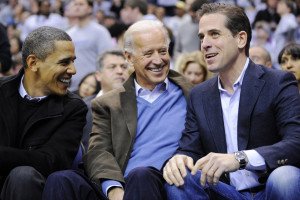 But the credibility of the vice president’s anticorruption message may have been undermined by the association of his son, Hunter Biden, with one of Ukraine’s largest natural gas companies, Burisma Holdings, and with its owner, Mykola Zlochevsky, who was Ukraine’s ecology minister under former President Viktor F. Yanukovych before he was forced into exile.

Hunter Biden, 45, a former Washington lobbyist, joined the Burisma board in April 2014. That month, as part of an investigation into money laundering, British officials froze London bank accounts containing $23 million that allegedly belonged to Mr. Zlochevsky.

Britain’s Serious Fraud Office, an independent government agency, specifically forbade Mr. Zlochevksy, as well as Burisma Holdings, the company’s chief legal officer and another company owned by Mr. Zlochevsky, to have any access to the accounts.

But after Ukrainian prosecutors refused to provide documents needed in the investigation, a British court in January ordered the Serious Fraud Office to unfreeze the assets. The refusal by the Ukrainian prosecutor general’s office to cooperate was the target of a stinging attack by the American ambassador to Ukraine, Geoffrey R. Pyatt, who called out Burisma’s owner by name in a speech in September.

“In the case of former Ecology Minister Mykola Zlochevsky, the U.K. authorities had seized $23 million in illicit assets that belonged to the Ukrainian people,” Mr. Pyatt said. Officials at the prosecutor general’s office, he added, were asked by the United Kingdom “to send documents supporting the seizure. Instead they sent letters to Zlochevsky’s attorneys attesting that there was no case against him. As a result, the money was freed by the U.K. court, and shortly thereafter the money was moved to Cyprus.”

Mr. Pyatt went on to call for an investigation into “the misconduct” of the prosecutors who wrote the letters. In his speech, the ambassador did not mention Hunter Biden’s connection to Burisma.

But Edward C. Chow, who follows Ukrainian policy at the Center for Strategic and International Studies, said the involvement of the vice president’s son with Mr. Zlochevsky’s firm undermined the Obama administration’s anticorruption message in Ukraine.

“Now you look at the Hunter Biden situation, and on the one hand you can credit the father for sending the anticorruption message,” Mr. Chow said. “But I think unfortunately it sends the message that a lot of foreign countries want to believe about America, that we are hypocritical about these issues.”

Kate Bedingfield, a spokeswoman for the vice president, said Hunter Biden’s business dealings had no impact on his father’s policy positions in connection with Ukraine.

“Hunter Biden is a private citizen and a lawyer,” she said. “The vice president does not endorse any particular company and has no involvement with this company. The vice president has pushed aggressively for years, both publicly with groups like the U.S.-Ukraine Business Forum and privately in meetings with Ukrainian leaders, for Ukraine to make every effort to investigate and prosecute corruption in accordance with the rule of law. It will once again be a key focus during his trip this week.”

Ryan F. Toohey, a Burisma spokesman, said that Hunter Biden would not comment for this article.

It is not known how Mr. Biden came to the attention of the company. Announcing his appointment to the board, Alan Apter, a former Morgan Stanley investment banker who is chairman of Burisma, said, “The company’s strategy is aimed at the strongest concentration of professional staff and the introduction of best corporate practices, and we’re delighted that Mr. Biden is joining us to help us achieve these goals.”

Joining the board at the same time was one of Mr. Biden’s American business partners, Devon Archer. Both are involved with Rosemont Seneca Partners, an American investment firm with offices in Washington.

Mr. Biden is the younger of the vice president’s two sons. His brother, Beau, died of brain cancer in May. In the past, Hunter Biden attracted an unusual level of scrutiny and even controversy. In 2014, he was discharged from the Navy Reserve after testing positive for cocaine use. He received a commission as an ensign in 2013, and he served as a public affairs officer.

Before his father was vice president, Mr. Biden also briefly served as president of a hedge fund group, Paradigm Companies, in which he was involved with one of his uncles, James Biden, the vice president’s brother. That deal went sour amid lawsuits in 2007 and 2008 involving the Bidens and an erstwhile business partner. Mr. Biden, a graduate of Georgetown University and Yale Law School, also worked as a lobbyist before his father became vice president.

Burisma does not disclose the compensation of its board members because it is a privately held company, Mr. Toohey said Monday, but he added that the amount was “not out of the ordinary” for similar corporate board positions.

Asked about the British investigation, which is continuing, Mr. Toohey said, “Not only was the case dismissed and the company vindicated by the outcome, but it speaks volumes that all his legal costs were recouped.”

In response to Mr. Pyatt’s criticism of the Ukrainian handling of Mr. Zlochevsky’s case, Mr. Toohey said that “strong corporate governance and transparency are priorities shared both by the United States and the leadership of Burisma. Burisma is working to bring the energy sector into the modern era, which is critical for a free and strong Ukraine.”

Vice President Biden has played a leading role in American policy toward Ukraine as Washington seeks to counter Russian intervention in Eastern Ukraine. This week’s visit was his fifth trip to Ukraine as vice president.

Ms. Bedingfield said Hunter Biden had never traveled to Ukraine with his father. She also said that Ukrainian officials had never mentioned Hunter Biden’s role with Burisma to the vice president during any of his visits.

“I’ve got to believe that somebody in the vice president’s office has done some due diligence on this,” said Steven Pifer, who was the American ambassador to Ukraine from 1998 to 2000. “I should say that I hope that has happened. I would hope that they have done some kind of check, because I think the vice president has done a very good job of sending the anticorruption message in Ukraine, and you would hate to see something like this undercut that message.”

James Risen is a Pulitzer Prize winning journalist. His books include The Main Enemy: The Inside Story of the CIA’s Final Showdown with the KGB (2003); State of War: The Secret History of the CIA and the Bush Administration (2006); and Pay Any Price: Greed, Power, and Endless War (2014).

Ukraine in the oligarchs’ grip, by Jérôme Duval, December 5, 2015, published on the website of the Belgium-based Committee for the Abolition of Third World Debt (CADTM)