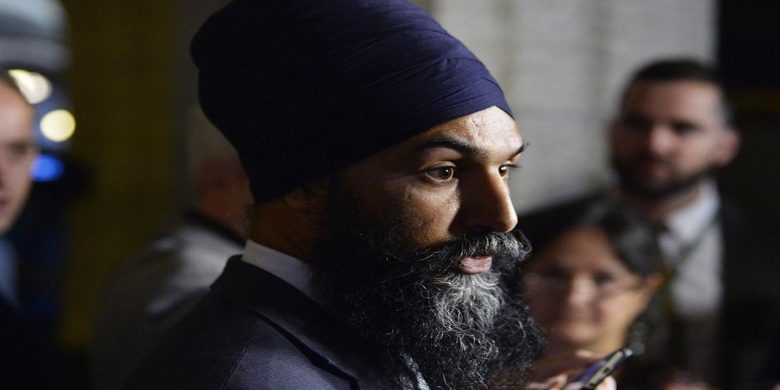 NDP Leader Jagmeet Singh said “Canada should not simply follow the U.S.’s foreign policy, particularly given its history of self-interested interference in the region. The question of who is to lead Venezuela should be in the hands of Venezuelans.” (MATTHEW USHERWOOD / IPOLITICS)

Jagmeet Singh, leader of Canada’s New Democratic Party is questioning the government’s decision to to recognize the leader of Venezuela’s opposition as the country’s interim president.

NDP Leader Jagmeet Singh is questioning Canada’s decision to recognize a Venezuelan opposition leader as the country’s interim president, after prominent members of his party lashed out at the Liberal government’s foreign policy move Thursday.

In a statement to the Star, Singh said it should be up to Venezuelans to decide who leads their country, which was roiled by deadly protests this week as the socialist regime led by Nicolas Maduro tries to cling to power amidst economic collapse and a mass exodus of migrants from the South American nation.

Canada’s foreign affairs minister, Chrystia Freeland, announced Wednesday that Ottawa will recognize Venezuelan opposition leader Juan Guaido as interim president and support his “commitment to lead Venezuela to free and fair presidential elections.” Canada was among the “Lima Group” of countries that called on Maduro to step down earlier this month, declaring that he seized power through “fraudulent and anti-democratic elections” last year.

The NDP leader, however, is calling for a United Nations-led dialogue to “avert a disaster” in Venezuela, and said Thursday that all countries deserve to choose their leaders without “authoritative pressure or foreign interference.” He also condemned military action against protesters by the Maduro regime.

“Canada should not simply follow the U.S.’s foreign policy, particularly given its history of self-interested interference in the region,” Singh said. “The question of who is to lead Venezuela should be in the hands of Venezuelans.”

Singh’s statement came after Niki Ashton, an NDP MP from Manitoba who has run twice for party leader, condemned Canada’s recognition of Guaido.

“Trudeau sides with Trump’s regime-change agenda and Brazil’s fascist president in support of someone calling for a military coup in Venezuela,” she wrote on Twitter, referring to Brazil’s right-wing leader, whose country joined Canada, the U.S., Colombia, Peru and others in recognizing Guaido Venezuelan president.

“We cannot support an agenda of economic or military coups,” she wrote. “#HandsOffVenezuela.”

Party veteran Svend Robinson, who has returned to politics and is running for a seat in British Columbia in this year’s election, echoed Ashton’s statement on Thursday. Speaking on Parliament Hill, he said there are “serious concerns” about repression of dissent and free speech in Venezuela, but that it is “shameful” that Canada’s government is recognizing “an illegal coup” in the country.

Robinson also pointed to the history of U.S. interference in Central and South America, including the attempted invasion of Cuba at the Bay of Pigs in 1961 and support for the military dictatorship in Chile when it took power in the early 1970s.

“We expect our government to stand with the people of Venezuela, not to be in lockstep with Trump and with (Brazilian President Jair) Bolsonaro,” he said.

Earlier Thursday, Liberal MP Michael Levitt called Ashton’s comments on the situation “troubling” and urged Singh to “join the government in its stance against Maduro’s illegitimate claim to power.”