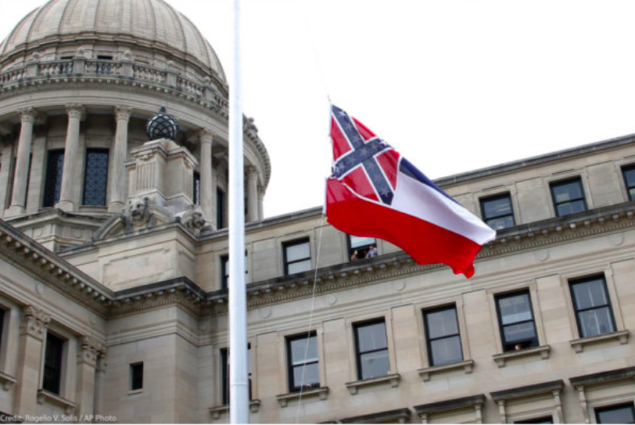 The decision to retire the Mississippi state flag is not erasing history, it is telling the truth about it.

Watch: The Truth About the Confederacy in the United States (FULL Version)
Jeffery Robinson, the ACLU’s top racial justice expert, discusses the dark history of Confederate symbols across the country and outlines what we can do to learn from our past and combat systemic racism.

Additional reading: The Sordid History of Mount Rushmore; “Independence Day” for Who?; Protest and Power

As people across the country ready themselves to celebrate America’s “independence,” there are few symbols more strongly associated with the holiday than flags. Flags have great meaning — particularly on July 4. This week, after decades of dispute and dialogue, Mississippi legislators finally voted to replace their state’s flag, which included what is known as the battle flag of northern Virginia. This was the flag flown by those defending white supremacy, and for some, it still is. The vote to remove the confederate iconography from the state flag raises important questions: Why was Mississippi the last state to remove such images from its flag — and why is this so significant?

If you asked Americans which state has the most racist history, many would likely say Mississippi. This ugly reputation is well deserved. According to its own secession statement, white people in the state had accumulated “four billions in money” from the practice of enslaving Black people. Jim Crow and segregation were everyday hallmarks in the lives of Mississippians. Sen. Theodore Bilbo, who represented the state in the U.S. Senate from 1935 to 1947, highlighted how critical white supremacy was in the lives of Mississippians when he called on “every red-blooded white man to use any means to keep the niggers away from the polls — if you don’t understand what that means you are just plain dumb. You and I know what’s the best way to keep the nigger from voting … you do it the night before the election.”

Emmett Till, Medgar Evers, Chaney, Goodman, and Schwerner are all names that shine a light on Mississippi’s history of white supremacy, violence, and hate. The University of Washington’s Lynching Violence Database documents 689 lynchings in Mississippi between 1877 and 1949 — the most of any American state. However, it was the modern-day lynching of George Floyd, broadcast across America, that sparked the current movement that led to the decision about the Mississippi flag.

Claims that the flag represents culture and heritage instead of white supremacy are refuted by the words of those honored on confederate monuments. In 1887, then Secretary of the Interior Lucius Q. C. Lamar spoke at the dedication of John Calhoun’s monument and said that he had to talk about Calhoun’s views on enslaving human beings, because “dissimulation and evasion were so foreign to his character that in his own case no one would disapprove and even disdain such silence more than he.” Calhoun was a virulent white supremacist, and last week, the infamous monument was removed from Charleston, South Carolina’s Marion Square following ongoing protests.

America has had 155 years of “dissimulation and evasion” about the confederate battle flag. The facts about the flag have always been damning, and they still are today. In his “Cornerstone” speech of 1861, then-vice president of the confederacy Alexander H. Stephens said the confederacy was founded on the principle that “the negro is not equal to the white man and that slavery subordination to the superior race is his natural and normal condition.” That statement highlights a truth that “heritage” cannot hide: The heritage of the confederacy was white supremacy. All people who fought under the battle flag that appeared on Mississippi’s state flag fought for white supremacy.

When Mississippi left the union, the state issued a secession statement that left no doubt about an unshakable belief in this racist doctrine:

“Our position is thoroughly identified with the institution of slavery — the greatest material interest of the world. Its labor supplies the product which constitutes by far the largest and most important portions of commerce of the earth. These products are peculiar to the climate verging on the tropical regions, and by an imperious law of nature, none but the Black race can bear exposure to the tropical sun. These products have become necessities of the world, and a blow at slavery is a blow at commerce and civilization.

The Union has enlisted its press, its pulpit and its schools against us, until the whole popular mind of the North is excited and inflamed with prejudice. We must either submit to degradation, and to the loss of property worth four billions of money, or we must secede from the Union…”

The northern Virginia battle flag stood for the same thing. Virginia’s secession statement was brief, but also clear: “…having declared that the powers granted them under the said Constitution were derived from the people of the United States, and might be resumed whensoever the same should be perverted to their injury and oppression; and the Federal Government, having perverted said powers, not only to the injury of the people of Virginia, but to the oppression of the Southern slaveholding states. ”

President Trump’s response to this history is laughable. He claims that removing the names of confederate heroes from military institutions would further divide the country, and that monuments should remain, because “if you don’t understand history you will go back to it again.”

Confederate heroes and the battle flag they fought under were willing, as John C. Calhoun wrote, “to drench the country in blood” to maintain white supremacy. Preserving their names on military institutions essentially tells Black Americans, “We don’t care what they did to your ancestors. Don’t bring it up, or we will be even more divided.” Monuments that portray confederate traitors as heroes have done nothing to prevent a new rise in white supremacy — they are literally monuments to this harmful, racist ideology, which will be engrained in our memories and history books no matter how many monuments are toppled.

When you fly a flag, it has meaning. Especially on July 4. The decision to retire the Mississippi state flag is not erasing history, it is telling the truth about it. And telling the truth is a necessary first step to reckoning with the legacy of slavery in America.

This 4th of July, let’s face the truth about our country’s history and its so-called Confederate heroes.

Doing so is the only way we can move forward. pic.twitter.com/2bVswP7KrJ

*****
Jeffery Robinson is ACLU Deputy Legal Director and Director of the Trone Center for Justice and Equality
Editors’ Note: While we don’t necessarily share the views we publish on New Cold War, we do attempt to provide readers with a range of views. This is because your right to make your own mind up depends on your being fully informed.
Share
Tweet
Share
Pin