‘It’s not over’: Tentative agreement with Wet’suwet’en Nation may be a milestone, but it doesn’t resolve pipeline fight 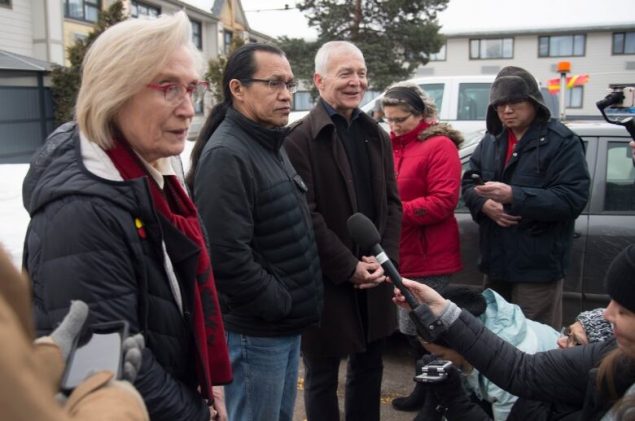 Neither the hereditary chiefs nor the B.C. and Canadian governments have changed their position on Coastal GasLink

The Wet’suwet’en hereditary chiefs and the B.C. and Canadian governments have come to a tentative agreement about rights and title, but none of the parties have changed their position on the controversial Coastal GasLink pipeline.

Chief Woos, who represents the Gidimt’en clan of the Wet’suwet’en, said the past three days of discussion were preliminary in nature and focused on ensuring that the needed respect was present.

“We are the land, and the land is ours.”

“The degree of satisfaction is not what we expected, but at the same time we’re looking at the other avenues, and we’ll see where that brings us.”

“The hereditary chiefs are opposed to any pipeline going through our territory,” he said. “We’ve maintained that since day one.”

Agreement not yet public

The agreement will now go to the 13 Wet’suwet’en house groups for approval. The details will not be released until a decision has been made.

Minister Bennett called the agreement a “milestone in the history of Canada.”

Chief Woos described the agreement as a preliminary step that he hopes will lead to Prime Minister Justin Trudeau and Premier John Horgan coming to meet with the Wet’suwet’en Nation.

He said that the Wet’suwet’en hereditary chiefs have informed the provincial and federal governments that the Delgamuukw decision has to be respected, and “that’s where this starts.”

Fraser said the Coastal GasLink project has already been given the green light.

In the 1997 Delgamuukw decision, the Supreme Court of Canada affirmed that the Wet’suwet’en and and their neighbours the Gitxsan, as represented by the nations’ hereditary chiefs, had title. But the court decided that technical errors in the proceedings meant the two nations would have to go through the process again to determine exactly where their title applied. The original case took over 300 days at trial and cost millions of dollars.

“We are the land, and the land is ours. We’ve maintained that right from day one,” said Chief Woos.

Bennett said the tentative agreement builds on the Supreme Court decision. “It is about rights and title throughout the yintah [territory] and it is about making sure, as Chief Woos said, this never happens again and that the rights holders will always be at the table.”

“It’s been 23 years since the Delgamuukw-Gisday’wa decision,” said Fraser, “and there has been little or no progress towards recognizing the rights and title of the Wet’suwet’en people since that time.

The fate of Coastal GasLink

As for the pipeline at the heart of the current dispute, the company says it’s full steam ahead.

“Coastal GasLink will resume construction activities in the Morice River area on Monday, March 2 following the four-day pause to allow for constructive dialogue between the parties,” President David Pfeiffer announced in a statement today.

The company’s latest environmental assessment report was “not accepted” on Feb. 19, 2020, by the B.C. ministry responsible. Construction cannot proceed until the report has been resubmitted and approved, though “pre-construction” work can continue.

Fraser said the Coastal GasLink project has already been given the green light.

“The project that is in place now, the permits have been in place, it has been permitted, it has been approved and it is underway,” he said. “Our expectation has always been that Coastal GasLink would work closely with the Office of the Wet’suwet’en and the Wet’suwet’en people to address concerns — environmental, cultural, spiritual — and that expectation has never wavered.”

The concerns of the Wet’suwet’en Nation about police conduct on their territory have not abated.

“That being said, as we move forward, we have the tools in place I think now in British Columbia in a unique way with our bill on the UN declaration, the declaration act, that allows us tools to recognize other forms of governance structures that are not necessarily recognized in the Indian Act.”

A few months ago, B.C. passed a bill to implement the UN Declaration on the Rights of Indigenous Peoples, but established no timeline for carrying out this work. Premier John Horgan has said the bill is not retroactive and does not apply to the Coastal GasLink project.

Fraser said it provides “tools to enter into shared decision-making processes for the future. Working together from the very beginning of a process in a government-to-government structure I think will bring more certainty and predictability not just for Wet’suwet’en but for all British Columbians.”

He did not answer directly when asked if the tentative agreement with the Wet’suwet’en would ensure Indigenous nations have a right to say no to future projects, or establish the free, prior and informed consent called for in the UN Declaration on the Rights of Indigenous Peoples.

Bennett said the precedent set by the tentative agreement “means at the very first idea of a project, that the rights holders would be there at the table with their Indigenous knowledge and the voices of their nation. It means this is a beginning of how we work towards a nation-to-nation relationship coast to coast to coast.”

She also said this will ensure “traditional laws and customs and legal orders are honoured as they form a government that can work nation to nation with Canada.”

It’s unclear what Indigenous nations would need to do to “form” a government, given already existing traditional structures.

A few months ago, B.C. passed a bill to implement the UN Declaration on the Rights of Indigenous Peoples, but established no timeline for carrying out this work.

Pressed on whether the RCMP would stay out of Wet’suwet’en territory around the Morice Forest Service Road, as they have during the current negotiations, Fraser responded that the RCMP and Coastal GasLink had made a concession “while we were doing this work.”

“My understanding is that our work for this moment has been done.”

The concerns of the Wet’suwet’en Nation about police conduct on their territory have not abated.

“We’re definitely looking at sitting down with the RCMP again,” said Chief Woos, “because it’s not over. We’re not going to sit back and look at the brutality and what have you out there. It’s real. If they’re watching out there, we’ve demonstrated respect, we’ve demonstrated that we’re willing to sit down and look at a peaceful resolution to that.