‘Itching for a War,’ Bolton Threatens Iran With ‘Unrelenting Force’ as US Bombers Deployed to Middle East 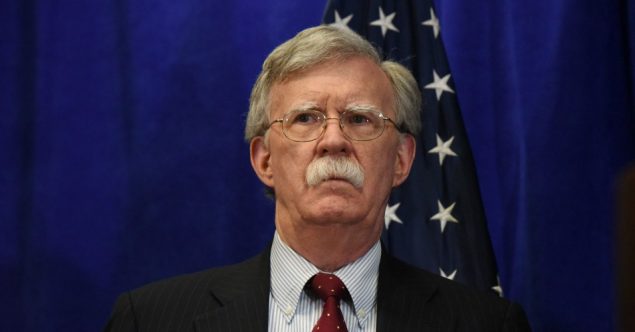 “The latest indication that this administration is running full speed directly into a major war with Iran.”

In a late Sunday statement warning—without any evidence whatsoever—of “troubling and escalatory” actions by the Iranian government, U.S. national security adviser John Bolton used the scheduled deployment of an American aircraft carrier and bomber task force to the Middle East to threaten Iran with military action.

“Bolton wants war. He will do any provocation to get war.”
—Trita Parsi, National Iranian American Council

The United States, said Bolton, “is deploying the USS Abraham Lincoln Carrier Strike Group and a bomber task force to the U.S. Central Command region to send a clear and unmistakable message to the Iranian regime that any attack on United States interests or on those of our allies will be met with unrelenting force.”

Foreign policy analysts and international observers were quick to point out that the Lincoln Strike Group’s deployment was announced nearly a month ago—a fact critics highlighted as further evidence that Bolton is willing to use any and every opportunity to move the U.S. closer to war with Iran.

According to The Guardian, the U.S. “withdrew its B-1 bombers from the Middle East in March for maintenance and upgrades amid concerns the bomber force was over-stretched. While such changes in global deployment are made regularly, it is rare for the announcement of such deployments to be made by a national security advisor rather than the Pentagon.”

“Bolton wants war. He will do any provocation to get war,” tweeted Trita Parsi, founder of the National Iranian American Council.

Stephen Miles, director of Win Without War, said Bolton’s statement is “the latest indication that this administration is running full speed directly into a major war with Iran.”

“This is Bush and Iraq in 2002,” said Miles. “The time to stop their disastrous war plans is now!”

There may be no graver danger to the world than John Bolton: pic.twitter.com/iwQBj5qamU

Bolton is itching for a war he can send other people to fight in. https://t.co/bEcwJ15whU

Bolton’s inflammatory statement came as the U.S. continues to intensify sanctions against Iran as part of its so-called “maximum pressure” campaign, which is directed by the national security adviser and Secretary of State Mike Pompeo.

Following Bolton’s statement late Sunday, Pompeo—also without citing a shred of evidence—echoed Bolton’s claim of “escalatory actions from the Iranians.”