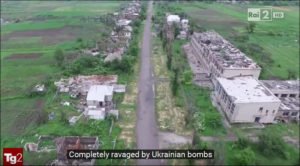 On June 13, the state television broadcaster in Italy, RAI, broadcast a four-minute news report on the state of the war in eastern Ukraine. Reporter Giovanni Mesotti reports from the front line of the conflict. The war is being prosecuted by the governing regime in Kyiv with EU-NATO backing.