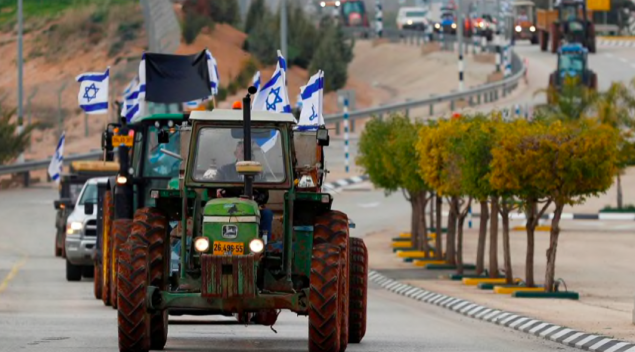 A convoy of cars setting out to express support for Israeli annexation of the West Bank and the Jordan Valley, January 2020. AFP

Israel isn’t interested in the distinction between its right to exist as a country and the dispute over West Bank settlements. Instead, it seeks to blur the borders.

The wall-to-wall support for West Bank settlements voiced in Israel on Wednesday in response to the UN human rights office’s release of a list of businesses operating in the settlements shows that the annexation everyone is talking about these days has actually happened de facto long ago.

Without any dramatic Knesset votes or referendums, and without the need for any favors from the Trump administration, the entire Israeli establishment stood unambiguously on the side of the settlements.

Granted, Prime Minister Benjamin Netanyahu surprisingly restrained himself from accusing the Office of the UN High Commissioner for Human Rights of anti-Semitism. But he did announce, as is customary among countries that are becoming increasingly internationally isolated, that “If anyone boycotts us, we’ll boycott them.” Israel is already boycotting the International Criminal Court and numerous other multilateral organizations, so adding one more to the list won’t be a big deal.

Ministers from Netanyahu’s Likud party, including Yariv Levin and Gilad Erdan, were less restrained. They jumped straight into the standard clichés – exploiting and cheapening the Holocaust by accusing the UN of anti-Semitism.

The prize, however, goes to President Reuven Rivlin. The very president who tries so hard to project a statesmanlike, tolerant, balanced image said that the list is a “shameful initiative reminiscent of dark periods in our history.”

In other words, publishing an international database about businesses that operate in the settlements – which is illegal according to international law and UN resolutions – is just as bad in Rivlin’s eyes as the Holocaust. It should be pointed out that this list isn’t even accompanied by any actual sanctions or boycotts, much less gas chambers.

This is also the same president who just recently hosted an impressive phalanx of dozens of world leaders at a conference against anti-Semitism in Jerusalem, where he urged them to protect democracy. Just as the international community was able to unite after World War II to promote a shared goal, he added, it must continue working together today on the basis of shared values.

But international law and international institutions evidently aren’t democratic enough for him – or perhaps he’s only selectively protective of democracy, when it’s convenient for him.

The support for de facto annexation of the settlements was also glaringly apparent among members of Israel’s so-called opposition. Kahol Lavan Chairman Benny Gantz said this was “a black day for human rights. The Office of the UN High Commissioner for Human Rights has lost all connection with reality.”

His partner in the party’s leadership, Yair Lapid, went even farther, calling the high commissioner for human rights – a woman with a long record of achievement who is internationally admired – the “UN commissioner for terrorists’ rights.” He even threated that “when we form a government, we’ll work against them with all our might, with no qualms.” When you recall how Israel actually deals with terrorists, this quote is even more troubling.

But the most surprising condemnation came from Amir Peretz, chairman of the ostensibly left-wing Labor-Gesher-Meretz joint ticket. “We oppose boycotts, and outrageous and superfluous UN decisions,” he said – although Meretz, which is part of this ticket, has until now actually supported boycotting settlements products. “We’ll work in every forum to repeal this decision and preserve a strong Israeli economy and Israelis’ jobs,” he added, in a statement that aroused unease, to say the least, among what remains of Meretz’s voters.

This was an official death certificate for the Zionist left in the face of the annexation that has already happened.

Behind the scenes, official state agencies, headed by the Foreign Ministry, also gave briefings assailing the list’s publication. During these briefings, the term BDS (referring to the boycott, divestment and sanctions movement) was repeatedly thrown around.

Anyone who still mistakenly thinks that Israel’s war against BDS is aimed against boycotts of Israel as a whole, including within the 1948 armistice lines, ought to sober up. Israel’s intention, as evident from both its legislation and in actions, is unequivocally to protect the settlements against boycotts. The state isn’t interested in the distinction between Israel’s right to exist as a country and the dispute over the settlements; rather, it seeks to blur the borders.

This was once again made clear by the Israeli bureaucrats who mobilized on Wednesday to assail international law in the name of annexation. With an uncomfortable giggle, one briefer even recited those same accusations of anti-Semitism in his talking points. In the Israel of 2020, official state bodies use BDS and anti-Semitism as synonyms in their campaign to protect the settlement enterprise.

In recent weeks, following the release of the Trump administration’s peace plan, there have been stormy campaigns on both the right and the left for or against officially annexing the settlements. But what happened on Wednesday proves that this is a sterile debate over mere symbolism. De facto annexation has already happened and continues to happen every day; it is only de jure annexation that’s still being fought over.

Israel has been treating the settlements as an inseparable part of the country for a long time already. De jure annexation won’t drastically change anything of importance that isn’t already happening on the ground. Israel has already annexed everything all by itself, and doesn’t need U.S. President Donald Trump and his ambassador to Israel, David Friedman. Official recognition is just icing on the cake.