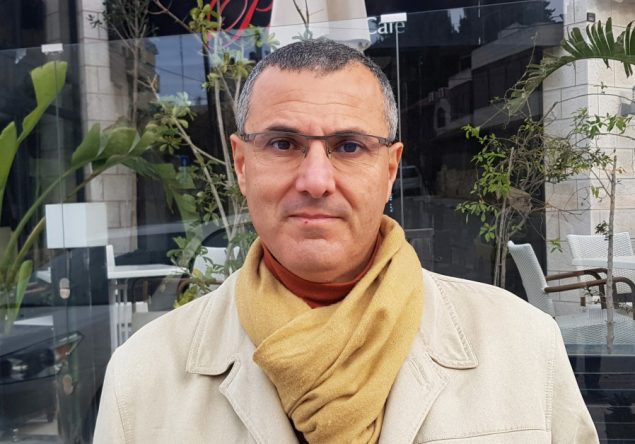 Barghouti was stopped at Ben Gurion Airport on Wednesday and prevented from boarding a plane to the US even though he had valid travel documents.

Barghouti was stopped at Ben Gurion Airport and prevented from boarding a plane to the US even though he had valid travel documents.

He had been invited by the Arab American Institute (AAI) to Washington to participate in a number of speaking engagements and educational programs.  He was also planning a speaking tour, and was to deliver addresses and participate in a number of public events, including at New York University as well as  in Washington D.C. and Harvard University. There, he was scheduled to meet with policy makers, thought-leaders and journalists.
Barghouti’s itinerary also included attending his daughter’s wedding.

The Qatar-born Palestinian reacted to the ban by saying that it is “ideologically and politically motivated,” and that it is “part of Israel’s escalating repression against Palestinian, Israeli and international human rights defenders in the BDS movement for freedom, justice and equality.”

THE BDS’s Twitter page published Barghouti’s reaction, in which he further accused Israel of carrying out a military occupation, apartheid, ethnic cleansing, and a “McCarthyite repression,” which it is outsourcing “to the US and to xenophobic, far-right cohorts across the world.”

Barghouti said he would address his audiences by satellite.

He further promised to prevail with his BDS efforts by way of intersectional partnerships with other struggling communities.

In February after the Israeli government refused to renew Barghouti’s travel documents, Amnesty International called on the country to “end the arbitrary travel ban on human rights defender Omar Barghouti,” a demand the government heeded.

Yet, even though Barghouti arrived at Ben Gurion Airport on Wednesday, ready to fly to the U.S., he was informed there that the American Consulate in Tel Aviv was directed by the U.S. Citizenship and Immigration Services (USCIS) to prevent Barghouti from traveling to the US. This despite the fact that he holds a valid visa to the US until 2021

The BDS-founder was told that it was an “immigration matter.”

AAI President James Zogby called Barghouti a “leading Palestinian voice on human rights,” adding that this “is the latest example of the Trump Administration’s disregard for those rights.”

Congressmen Lee Zeldin (R, NY-1) defended the decision by saying “the rise of anti-Semitism and anti-Israel hate throughout the world, in our nation, on college campuses and within the halls of Congress” must be rejected.

“Barghouti’s anti-Israel and anti-Semitic hate must not be tolerated, empowered or embraced, and I applaud the Administration’s denial of his entry to the United States,” Zeldin added.

Peter Beinart, who was supposed to interview Barghouti in Washington, tweeted: “I meant to interview Omar Barghouti in person today. But we did it via Skype because the US wouldn’t let him in. What a disgrace. I was raised to believe in a Judaism that feared no hard question or conversation.”