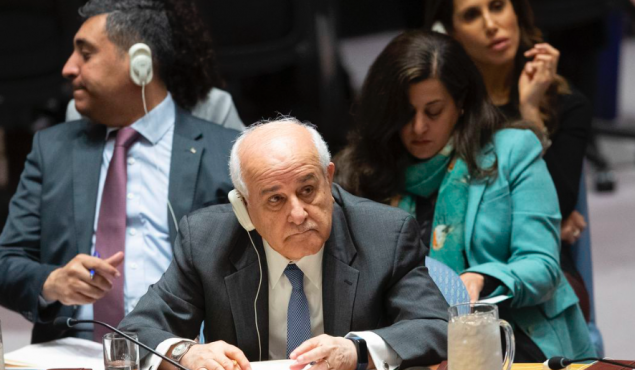 Palestinian Ambassador to the United Nations Karen Riyad Mansour listens to speakers during a meeting on the Middle East, including the Palestinian question, Wednesday, Nov. 20, 2019 at United Nations headquarters. Mary Altaffer/The Associated Press

Israel has condemned Canada for voting for a United Nations resolution that calls for the establishment of a Palestinian state, with Israel’s ambassador and others expressing concern that Ottawa is helping to delegitimize the Jewish state.

Israel has condemned Canada for voting for a United Nations resolution that calls for the establishment of a Palestinian state, with Israel’s ambassador and others expressing concern that Ottawa is helping to delegitimize the Jewish state.

Nimrod Barkan, Israel’s ambassador to Canada, told The Globe and Mail on Wednesday that his country intends to lodge a formal protest after Canada joined 165 other countries by voting Yes on Tuesday for a resolution entitled the “Right of the Palestinian people to self-determination” at the UN General Assembly’s Third Committee.

Over the past decade, both Conservative and Liberal governments have annually voted against the resolution, which, among other things, urges an “end to the Israeli occupation” and calls for the preservation of the “territorial unity, contiguity and integrity of all of the Occupied Palestinian Territory, including East Jerusalem.”

We regret the Canadian change and we will express our regret officially to the Canadian representative in Israel, hopefully next week,” Mr. Barkan said in an interview. “We think the resolution is not a substantive resolution, but an attempt to delegitimize Israel and is part of the whole package that should be rejected out of hand.”

Mr. Barkan said Israel was only given a few hours notice on Tuesday that Canada intended to vote for the UN resolution.

It was a surprise … we had no inclination or hint that Canada would change its vote on the regular annual UN resolutions and we trusted Canada, knowing that this is a circus of anti-Israeli resolutions,” he said.

The ambassador would not say if he believed Canada’s change of position is an attempt by the Trudeau government to win over Arab countries in its quest to obtain a rotating seat on the UN Security Council next year.

Tuesday’s resolution was opposed by Israel, the United States and three Pacific island countries that depend heavily on U.S. aid and tend to vote with Washington at the UN: the Marshall Islands, Nauru and the Federated States of Micronesia. The resolution was sponsored by North Korea, Egypt, Nicaragua, Zimbabwe and the Palestinian Authority.

“The UN is not court. It is an exercise in public relations and they have an automatic majority that votes against Israel … so we don’t think Canada should co-operate with this exercise,” Mr. Barkan added.

Foreign Affairs Minister François-Philippe Champagne said Canada has explained its position to its allies and has been in touch with members of the Jewish community about its decision to support the UN resolution.

“I think people in the Jewish community in Canada and across the world see Canada as an ally but there are times when we must express our opinion and our position as we did yesterday at the UN,” Mr. Champagne said in French, later adding that Canada’s friendship with Israel is “strong” and remains.

Canadians for Justice and Peace in the Middle East praised and thanked Canada for backing the U.N. resolution, saying it’s a “long overdue step.”

“CJPME is pleased that Canada finally voted in favour of UNGA resolution A/C.3/74/L.58, which condemns Israel’s Apartheid Wall and ongoing occupation of the Palestinian territories, while stressing the need to ‘support and assist the Palestinian people in the early realization of their right to self-determination,’” the organization said in a statement.

Jeffrey Rosenthal, co-chair of the Centre for Israel and Jewish Affairs, said the vote represents a “distressing departure” and a betrayal of long-standing foreign policy.