Is Trump using the U.S. military for regime change in Venezuela? 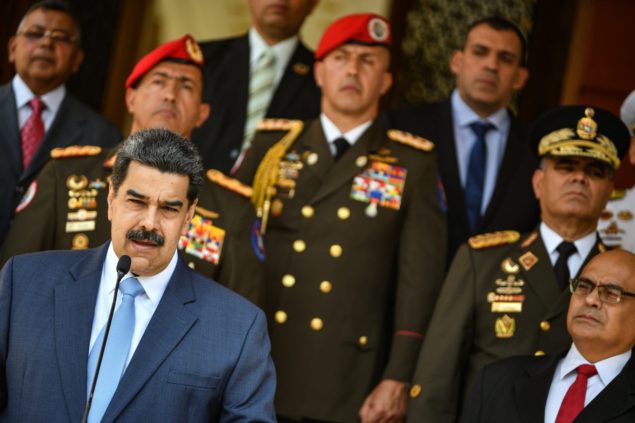 U.S. policy towards Venezuela has been a head-spinning series of contradictions lately, with no end in sight. From placing a bounty on the heads of President Nicolas Maduro and a dozen current and former Venezuelan officials, to upping sanctions and sending the largest fleet ever to the Southern hemisphere to stop drug trafficking from Venezuela, the U.S. appears to be pursuing an inexorable path towards regime change.

But at the same time, U.S. officials have announced they don’t seek a “coup” against Maduro, that the U.S. Naval deployment doesn’t seek his ouster, and that the United States wants Maduro to agree to a power-sharing deal, despite the bounty they’ve placed on his head.

An examination of the timeline reveals the last month of U.S. policy towards Venezuela has been nothing if not chaotic.

At the end of March, the United States indicted Venezuela’s President Nicolas Maduro and a dozen former and current officials on corruption, narco-terrorism and drug trafficking charges. The State Department announced that the U.S. will pay $15 million for information leading to Maduro’s arrest and conviction.

A day later, Elliot Abrams, reportedly chosen as the U.S. Special Envoy for Venezuela by Secretary of State Mike Pompeo for his expertise on coups,announced the “Democratic Transition Framework for Venezuela.” The framework calls on Maduro’s government to embrace a power-sharing deal. The plan doesn’t explain how Venezuelan leaders with bounties on their heads could come to the table and negotiate with Juan Guaido, whom the U.S. recognizes as Venezuela’s legitimate leader.

Meanwhile, the Trump administration increased sanctions on Venezuela and announced with much fanfare that U.S. Naval warships were on their way to the Caribbean to prevent “corrupt actors” and drug cartels from smuggling narcotics into the U.S.

“The goal is to replace [President Nicolas] Maduro’s illegitimate dictatorship with a legitimate transitional government that can hold free and fair elections to represent all Venezuelans. It is time for Maduro to go,” said Secretary of State Mike Pompeo.

A few days after that, and eighteen years after the U.S. supported a coup against Hugo Chavez, Abrams warned that if Maduro resisted the organization of a “transitional government” his departure would be far more “dangerous and abrupt.” Yes, this is the same Abrams who only days earlier had recommended a power-sharing arrangement. To many, Abrams’ aggressive rhetoric looked a lot like the U.S. “effectively threatening him with another assassination attempt” like the one the U.S. “tacitly supported in 2018.”

Faller said the U.S. buildup in the Caribbean is not aimed at ousting Maduro. The decision to double anti-narcotics assets in Latin America was not directly tied to Maduro’s indictment, and “economic and diplomatic pressure — not the use of military force — remain the U.S.’s” preferred tools for removing Maduro from power, said Faller.

Despite the fact that he’s leading the largest ever U.S. Naval deployment in the Southern hemisphere, and the biggest deployment since the invasion to remove Gen. Manuel Noriega of Panama, Faller contends that his operation is “not an indication of some sort of new militarization in the Caribbean” and that “this is not a shift in U.S. government policy.”

So, the Trump administration’s real aims in Venezuela remain elusive, if not confusing.

“Certainly the timing of the deployment, coming as it does on the heels of the DOJ’s indictment of Maduro on narco-terrorism charges and the placement of a bounty on his head, looks suspicious,” said Dr. Alejandro Velasco, associate professor of Modern Latin America at New York University, in an interview with TAC. “While there may not be a causal relationship between the deployment and the administration’s regime-change policy, there is a strong correlation between the two.”

“To the extent that DOJ has indicted Maduro et al on narco-terrorism charges, and the Navy operation is geared at disrupting drug cartels, then it follows that, at the very least, the aim of the deployment is to squeeze Maduro,” said Velasco. “The issue is that Maduro’s primary (or even secondary or tertiary) source of revenue isn’t narcotics, it’s minerals like oil and gold.”

“The fact is, there is a government in Venezuela that the U.S. government does not like, and the U.S. has been citing and bolstering [Maduro’s rival] the interim president Juan Guaido, funding him and spearheading an effort to get him to either—initially it was to take office, now it’s to negotiate,” said Dr. Eduardo Gamarra, a professor and expert on Latin American politics at Florida International University, in an interview with TAC.

“It’s curious, because on the one hand, our government has indicted Maduro and set a bounty on his head… we’ve labelled Maduro a drug trafficker whom we want to extradite, but then the following week, we said we want to negotiate with him.”

One thing is for certain—the Trump administration’s stated intention, of deploying the U.S. Navy to interdict narco-trafficking, is nonsensical, said Gamarra.

“Most of my research has been on drug trafficking trends, and if you look at those, and the U.S. has done these kinds of anti-trafficking exercises many times in the past, we’ve had very little impact on the flow of drugs northward,” said Gamarra. “There’s a balloon effect, where if we squeeze the Caribbean, then most drugs come through Mexico … Eighty three percent of cocaine that comes into the U.S. enters through Mexico, currently aided by Mexican cartels.”

Drug traffickers don’t need to transport drugs through the Caribbean when there’s a relatively unguarded land route via the U.S. southern border, he said. Of course, as coronavirus ravages the globe, the flow of all goods have declined, so “we will probably see a decline in drugs too.” But the fact is that the majority of drugs that enter the U.S. do so through the Pacific, not the Atlantic coast.

The Trump administration may have its eyes on domestic political prizes rather than long-term foreign policy goals, suggests Velasco. There are big pockets of Venezuelan and Cuban Americans in swing-state Florida that eagerly greeted the news of the U.S. deployment, only to be let down by the subsequent lack of action and contradictory administration statements, Gamarra points out.

“As time passes, they get the sense that they’ve again been duped,” said Gamarra. “How long has it been since this administration told Venezuelans ‘all options are on the table?’ Maduro is still there, not weaker but stronger. [On Thursday] in at least four states, there were massive lootings, the state has essentially collapsed, but still the government doesn’t fall, and the virus has actually helped strengthen its position … what is the U.S. waiting for?”

Roger Noriega, AEI fellow and former ambassador, said the mobilization of assets off the coast of Venezuela “is a very tangible sign that the U.S. is losing its patience” with Maduro, who agrees with the administration’s aggressive approach.

“The costs are getting rather high, right on our doorstep,” he said. “Maduro’s regime is destabilizing the rest of the region, including our key ally Colombia, and aiding and abetting narco-trafficking and presiding over a humanitarian disaster.”

“Sooner rather than later, I think Trump’s going to have to consider being much more forceful in dealing with this. That could mean carving out a no-fly zone, territory for humanitarian aid, or getting authority from Congress to conduct clandestine operations against bad guys at the head of the regime. So far, they have been far from creative in dealing with this threat, which has been worsening on their watch.”

Noriega doesn’t think “too many people would blame” Trump “if he went in with a small force to take care of this festering criminal regime in the way we did with Noriega” in the ’80s, but if it comes to that, it will be because “there’s been a real failure here of U.S. intelligence, and a complete and utter lack of creative thinking from the career diplomats. They’re the ones who wrote the ridiculous framework for a diplomatic transition.”

“The State Department’s approach is completely out of sync with what the president ostensibly wants to do,” he said. “When his DOJ indicts these guys, when the DoD deploys these additional forces to deal with the criminal threat, when the Treasury Department is heaping on sanctions, and then the State Department comes out with this rather surrealistic plan that essentially blesses a narco-trafficking framework to stay in power, it shows a profound lack of understanding about the dynamics within the region.”

Not everyone would agree with Noriega, who has been a hawk on the region since his days as Assistant Secretary for Western Hemisphere Affairs under George W. Bush. With a pandemic competing for the full attention (and resources) of the federal government it may be likely that Trump’s anti-interventionist instincts win over. One thing is clear: the administration’s muddy policy in the region, and the resulting confusion it kicks up, may be the worst of both worlds, setting both countries on a collision course towards regime change.

Barbara Boland is TAC’s foreign policy and national security reporter. Previously, she worked as an editor for the Washington Examiner and for CNS News. She is the author of Patton Uncovered, a book about General George Patton in World War II, and her work has appeared on Fox News, The Hill,  UK Spectator, and elsewhere. Boland is a graduate from Immaculata University in Pennsylvania.